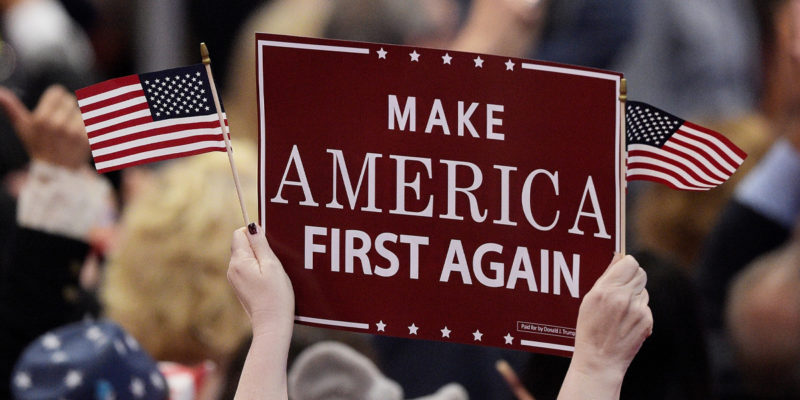 On Thursday, President Joe Biden gave a disgusting and divisive speech demonizing millions of Americans who believe in the “Make America Great Again” (MAGA) movement. After calling these patriotic Americans “semi-fascists,” Biden used the backdrop of Independence Hall in Philadelphia, lit in red with two Marine guards behind him, to label MAGA Republicans as “a threat to this country.”

He also claimed MAGA supporters represent “extremism” and “promote authoritarian leaders.” Of course, he was directing his fury at President Donald Trump, who he labeled a “clear and present danger.”

What is so dangerous about wanting the best for America and for focusing on our country, not nation building abroad? For Biden and much of the political establishment, this philosophy is a threat to the “New World Order” that has been supported by both parties since President George. H. W. Bush’s administration.

Bush had challenged Ronald Reagan for the 1980 GOP presidential nomination. He was a former Texas congressman, Central Intelligence Agency (CIA) Director and Chairman of the Republican National Committee. He was the essence of an establishment politician, a “country club” Republican.

Reagan, a true ideological conservative, chose Bush to unite the different factions in the Republican Party. He was elected President in 1988, after Reagan’s two successful terms. His victory was due to Reagan’s popularity, not his skill as a candidate for he was totally uninspiring.

Even though he was a moderate, Bush tried to push conservative themes for strictly political reasons. For example, at the 1988 GOP National Convention, Bush promised “Read My Lips, No New Taxes.”

Unfortunately, upon getting elected, he promptly ignored that promise and raised taxes. He also incessantly discussed a “New World Order,” which involved a globalist utopia of international organizations controlling the lives of average people. His policies led to a recession, but it also led to his defeat in the 1992 presidential race to a much better politician, Arkansas Governor Bill Clinton.

After a few years as Governor, George W. Bush decided to run for President in 2000. With his father’s help, he secured the GOP nomination. His choice for Vice President excited few grassroots Republicans. He selected Dick Cheney, a former Wyoming Congressman and Defense Secretary in the first Bush administration.

For George W. Bush, it was a safe choice, a person who his father trusted. However, it was also a politician who shared the Bush family’s neocon, globalist views.

After their election in 2000 and re-election in 2004, the Bush-Cheney administration added trillions of dollars to our nation’s debt by massively expanding the federal government. The administration also launched America into two long, expensive, and unnecessary wars, which cost the lives of thousands of our military heroes.

President Bush also supported the creation of the Department of Homeland Security after the 9/11 terrorist attacks. Most ominously, the administration endorsed the intrusive and unconstitutional Patriot Act, which unleashed our intelligence services to spy on the American people.

The Bush-Cheney administration was a total disaster. It was focused on nation building overseas but ignored major problems domestically. Their bungled and delayed reaction to Hurricane Katrina was one of the worst federal government emergency responses in American history.

During their administration, the problem of illegal immigration across our southern border increased dramatically, Fortunately, their foolish idea to grant amnesty to millions of illegal aliens was defeated after an outpouring of opposition from conservatives across the country.

The many failures of this administration set the stage for the election of the radical leftist Barack Obama as President in 2008. This debacle should have been the end of the Bush-Cheney dominance over the Republican Party.

Unfortunately, it was still influential among some Republicans, so Jeb Bush decided to run for President in 2016. Of course, oddsmakers rated Bush as the favorite. Instead, he was destroyed by a politician of unique ability and incredible appeal, Donald Trump, who created a nickname for the former Florida Governor. Trump called him “Low Energy.” The attack helped destroy Bush’s campaign and he failed miserably without winning one primary.

While Trump was being elected President in 2016, phony Republican Liz Cheney was elected to Congress in Wyoming. She ran on her father’s coattails as a traditional conservative.

Americans soon discovered that Liz Cheney represented the Beltway much more than Wyoming. She is a typical neocon warmonger who was constantly wanting to send U.S. troops overseas to fight in unnecessary wars. She tangled repeatedly with President Trump throughout his tenure. According to Cheney, MAGA is a dangerous philosophy that threatens our “freedom.”

Such nonsense has been on total display during the January 6th committee hearings as Cheney, along with the Democrats, have been desperately trying to blame Trump for all the violence on that day. While Cheney has been focusing on Washington D.C., Harriet Hageman, her opponent in the 2022 GOP nomination campaign, was talking to Wyoming voters about important local issues.

The result in the Wyoming Republican primary was a landslide victory for Hageman, an overwhelming repudiation of Liz Cheney and her brand of neocon globalism.

With this defeat, Republican voters sent a clear message that the Bush-Cheney wing of the GOP is no longer powerful, instead it is irrelevant.

Donald Trump has totally revamped the Republican Party. Voters are concerned about national sovereignty, securing borders, fighting crime, bringing jobs back to our country, ending the endless wars and stopping the outpouring of American resources to foreign countries.

In 2022, Republican voters want to “Make America Great Again” after the decades of disastrous rule from progressive Democrats and establishment Republicans. It is a major reason to be excited about the future of the Republican Party and the country.

Biden often says, “this is not your father’s Republican Party.” Thank God.