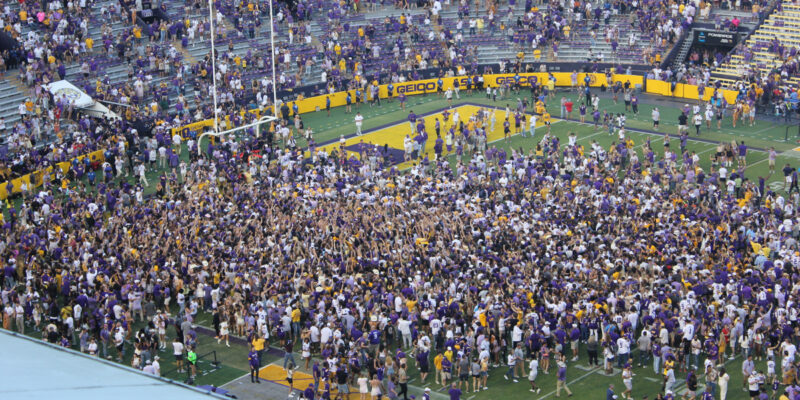 …not quite the ones we would have liked to see. This is one of those posts which talks about life in the context of football, so try not to let that obscure the point I’m making.

Let’s understand the point up front, which is this: people in Louisiana have a real problem understanding and appreciating quality. There are a number of causes for that – there’s the fact that we live in Hurricane Alley, so building something nice is almost inviting heartbreak when a Katrina, Rita or Ida comes along, there’s the fact that our state depends on the oil and gas industry which is up and down with the vagaries of the market or whether climate nuts who want to put us out of business are in political power, there’s our history of being governed by cretins and morons, and so forth.

But perhaps most prominent is the fact that Louisiana, more than any other state, is totally dominated by people who were born and raised here. Just less than 80 percent of the state’s population is home-grown, and that’s way more than the next state (last I checked West Virginia was around two-thirds home-grown and they were second). So you have a lot of people who haven’t been around and haven’t lived anywhere else, and there’s a frame-of-reference issue.

And what comes from that is a number of things, among them two which seem pretty obvious this morning.

First, we’re way, way too tolerant of garbage. Show us something terrible and we don’t recoil from it anywhere near as much as we should. We have a governor who locked the state down like it was California during COVID, to no positive effect whatsoever, and other than a decent number of high school football moms nobody seemed to get the least bit mad. This same governor has run off some 250,000 Louisianans in net outmigration while overseeing a destroyed, moribund economy, and every single city of size in Louisiana is now a shooting gallery with storefronts going empty one after another, and you will still run across perfectly normal-seeming people who’ll admit they voted for him twice and say things like “John Bel Edwards really hasn’t done all that bad a job.”

And second, they’ll judge things on bizarre criteria, most importantly there is this crazy One Of Us attitude in which someone’s identity as a homeboy or homegirl is mistaken for actual quality.

Which is not to say that Local Boy Made Good isn’t a good story. Of course it is. But when you’re willing to sacrifice quality in pursuit of that story, the fact is you’re going to suffer for it.

Ed Orgeron might be the all-time greatest example of this. Orgeron was a coach nobody wanted, who had been a complete disaster and washout as Ole Miss’ head coach and who had interviewed at several smaller schools for their head coaching job to no avail, before he got himself hired as Les Miles’ defensive line coach at LSU. Miles had gotten very stale by then and it was getting time for him to move on, and the program needed a complete breath of fresh air.

But when Miles finally got fired and Orgeron, who as the coach on the staff with the most head coaching experience was named the interim, what happened next was an unleashing of stupid good-ole-boy politics like you could only see in Louisiana, and before it was over LSU ignored interest from a host of much better coaches in order to hire the Cajun from Lafourche Parish. It was a purely political hire, driven because LSU’s Board of Supervisors was behind it and then-athletic director Joe Alleva was too much of a wimp to make a real hire.

And give Orgeron his due, he managed to ride a coaching staff headed up by Dave Aranda, who’s now an excellent head coach at Baylor, to a good run in his first three years. That culminated with the 2019 season, in which a team so loaded with NFL talent that you almost can’t watch a game on a Sunday without seeing somebody who played on that team in a pro uniform went 15-0 and wrecked college football.

Yes, Ed Orgeron has that ring and no, nobody is taking it away from him.

But the idea that only Ed Orgeron could have won that championship in 2019 fails the logical test.

2019 was 2019 mostly because of Joe Burrow. Orgeron was able to bring Burrow in and he gets credit for that, but does anyone really believe Burrow, who was making a business decision when he chose to transfer from Ohio State in the summer of 2018, wouldn’t have chosen LSU but for Orgeron?

Would a Mike Gundy or Dana Holgorson or whatever other well-respected coach LSU could have hired instead of the good ole boy from down the bayou have failed to attract Burrow? LSU already had Justin Jefferson, Ja’Marr Chase and Terrace Marshall locked in at wide receiver; all they needed was a quarterback. Such circumstances tend to be attractive to high-quality transfers.

Then Orgeron proceeded to trash the program he’d been given credit for building. No college football program has ever been so badly mismanaged than LSU was in 2020 and 2021; things got so bad that he had to hire a pair of coaches who’d never been coordinators to run his offense and defense in 2021 because the rest of the coaching world knew it was a matter of time before he got fired and they didn’t want the stink of LSU’s ruin on them.

Yes, it was that bad. LSU became the Land Of The Opt-Out. Chase and Marshall both quit on the team, just like lots of other NFL-talented players did. By the time LSU limped into the bowl game in 2021 with a 6-6 record, there were only 39 scholarship players available between injuries (some not all that serious), opt-outs and academic disasters.

If you’ve any appreciation for quality you would look at this and seethe over the fact that for this abysmal performance, which contained a bit of moral turpitude on the side – Orgeron’s divorce after the 2019 season and his open cavorting with much younger women, not to mention other behavior unbecoming of a CEO of a hundred-million-dollar enterprise – he was paid some $15 million in go-away money.

But nope. He’s still loved for having won that national championship, while Miles – who also won one – is treated as an embarrassment.

There’s one reason for this. It’s that Orgeron is One Of Us. That he ultimately destroyed what these people love is forgiven because he’s One Of Us.

And this kind of outhouse provincialism went on display all over social media after Brian Kelly signaled that his rebuild of LSU’s program is ahead of schedule by spotting No. 7 Ole Miss a 17-3 lead and then mounting a 42-3 run to crush the Rebels’ dreams. That 45-20 victory put LSU, which had mostly looked very average for the first half of the 2022 season, atop the SEC West standings with a 4-1 record, 6-2 overall.

And the reaction by a dogged segment of the LSU fan base had it that Orgeron had left Kelly with a big chunk of talent and it just took the new coach, who’s a “bad cultural fit” at LSU, two-thirds of the season to figure out how to coach it.

No, I’m not going to embarrass any of these people individually by including screenshots or embedded tweets. Besides, they’re everywhere.

This extends to the quarterback play, too. Jayden Daniels, a carpetbagging transfer from Arizona State, struggled quite a bit to fully grasp the offense and get confident with his receivers. But in the last two weeks he’s completed 73 percent of his passes for more than 600 yards, he’s run for better than 160 yards and he’s accounted for 11 touchdowns in leading the LSU offense to 90 points against a pair of credible SEC opponents.

Along the way Daniels has been savaged by a big portion of LSU’s fan base, very many of whom have moaned about the fact that Kelly abandoned Myles Brennan, a homeboy from the Mississippi Gulf Coast whose family is an old New Orleans name, as the quarterback and Brennan would have been better.

But Brennan’s heart wasn’t in football anymore and he was badly outworked in the spring and summer. Only provincialism would explain the whining.

Again, we’re not talking about football here. We’re talking about culture and mindset. The attitudes and thought processes which lead to such reactions don’t just apply to LSU football. They apply to everything.

Let’s not forget that LSU’s legislature is led by, and is replete with, Ed Orgerons. The leadership vacuum plaguing this state has put us in an almost hopeless position with respect to economic competition not just with Texas and Florida but others as well – South Carolina, Tennessee, Alabama…

We’re all fired up about the fact LSU has beaten both Mississippi State and Ole Miss this year. But Mississippi is killing Louisiana in economic development and it’s getting worse. We have people whispering about getting rid of the state income tax, in the knowledge that it’ll be years before that’s even possible to pass, and Mississippi is already working on phasing theirs out.

All fall it’s been instructive to watch the growth of a program set on a course to recapture what it had when Nick Saban – another high-quality import who was a “bad cultural fit” at LSU – built it 20 years ago, while the local yokels threw all the usual complaints Kelly’s way.