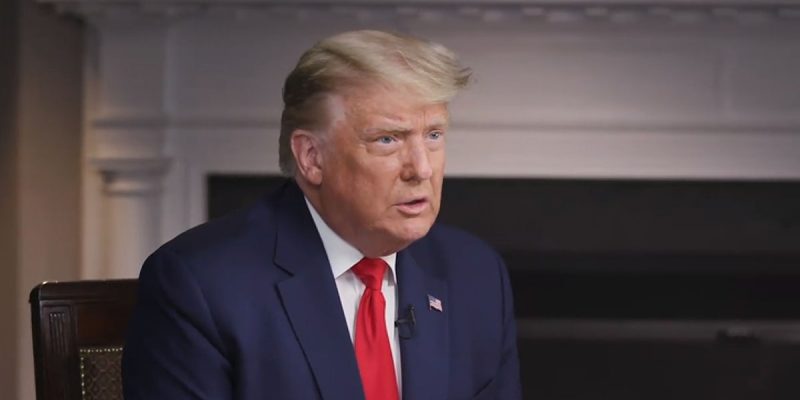 There is an obvious reason that President Donald Trump plays the Sam and Dave classic “Hold On, I’m Comin’” at the end of his campaign rallies. He wants to give the American people hope that our collective nightmare will eventually end.

Since President Donald Trump left the White House in January of 2021, it has been unmitigated hell for the American people. With the Democrats in control of the White House and Congress, the nation has sunk into economic despair.

At the end of the Trump administration, inflation and interest rates were low. The country was experiencing economic growth and recovering from the massive financial strain of the pandemic.

The dual threat of soaring inflation and high interest rates are causing Americans to worry about paying their bills and surviving financially. According to recent surveys of Americans, an astounding 63% are living paycheck to paycheck and 66% are worse off financially than one year ago.

With difficult economic times, Americans are dipping into their investment accounts, so 72% have less reserve funds than last year and, sadly, 29% have absolutely nothing left in their savings.

It is inadequate to call this situation a crisis, in fact, it is an economic emergency. However, President Joe Biden, as tone deaf as any politician in American history, claims our economy is “strong as hell.”

Biden is the anti-King Midas, as everything he touches turns to ruin. Along with Democratic Party politicians in control of Congress and our major urban areas, Biden has created devastation throughout our country.

This administration inherited a secure border, but quickly ended construction of the wall and reversed successful policies. The result is that an incredible surge of approximately 5 million illegal aliens from more than 150 nations have entered the country since the start of the Biden presidency. This figure exceeds the population of 25 states and 100 countries around the world.

While border patrol agents are overwhelmed, the Biden administration has maintained the fiction that everything is secure. The inept and dangerous Secretary of the Department of Homeland Security, Alejandro Mayorkas, has often repeated the lie that the “border is closed.”

This indifference, negligence and arrogance should lead to the impeachment of Biden, Mayorkas and other cabinet officials when the Republicans take back control of Congress in January.

The person most responsible for this GOP “wave” is President Donald Trump. From the day he descended the escalator in Trump Tower and announced his presidential campaign, he showed the Republican Party how to fight back against the Deep State, the media, and the Democrats.

In this election cycle, he courageously endorsed candidates in GOP primaries, picking bold supporters of the Make America Great Again (MAGA) agenda. Of the 236 candidates he endorsed, an incredible 92% were victorious. In many cases, it was Trump’s endorsement that was the main reason these candidates won the Republican Party nomination.

The 2022 GOP “wave” will result in many strongly pro-Trump candidates getting elected. These candidates will work non-stop to halt the dangerous Biden agenda, but it will only prevent more harm from being done to the country. Unfortunately, the first two years of the Biden presidency have been unbelievably damaging.

The only way for our country to return to sanity, prosperity, and security is for the right President to be elected in 2024. Of course, the winner of that election should be the most deserving and capable candidate, President Donald Trump.

As a candidate and President, he endured an unrelenting assault from his political adversaries that is unprecedented in American history. His attacks came from a wide variety of sources such as the media, opponents in the GOP, Democrats, the Deep State, intelligence officials and the senior leadership in the Department of Justice and the FBI.

President Trump deserves a chance to finish the job that he started so magnificently in his first term. During his first four years, he accomplished a tremendous amount for the American people, despite the obstacles created by his political enemies, as well as many establishment Republicans in his own administration.

If he is elected for another term, President Trump will be even more effective for the American people. In his first term, too many of his cabinet members and other key appointees worked to undercut his agenda, subvert his goals, and betray him to his political enemies.

After seven years of investigations and roadblocks, he fully realizes the depths to which his enemies will sink to try to stop him. In his next administration, he will carefully choose only MAGA loyalists for his key cabinet positions. He will choose qualified individuals who believe in his agenda, not fraudsters who only pretend to support him.

Despite ongoing harassment from the Biden Justice Department and the New York Attorney General, the stage is set for President Trump to announce his next campaign on November 14.

He is telegraphing to the American people that he will run for President again. In the final five days before the midterm election, President Trump scheduled four rallies, a last-minute push to help MAGA candidates win.

At last Thursday’s rally in Sioux City, Iowa, President Trump said, “In order to make our country successful and safe and glorious, I will very, very, very probably do it again…get ready.”

In other words, to the millions of Americans who are suffering, “Hold On,” President Trump is coming back, relief is on the way. This is nothing but music to the ears of all who love our great country.

Jeff Crouere is a native New Orleanian and his award-winning program, “Ringside Politics,” airs Saturdays from Noon until 1 p.m. CT nationally on Real America’s Voice TV Network & AmericasVoice.News and weekdays from 7-11 a.m. CT on WGSO 990-AM & Wgso.com. He is a political columnist, the author of America’s Last Chance and provides regular commentaries on the Jeff Crouere YouTube channel and on Crouere.net. For more information, email him at [email protected].

Interested in more national news? We've got you covered! See More National News
Previous Article The Hayride’s Guide To The Eight Constitutional Amendments On The Ballot Tomorrow
Next Article So Much Whining About The 2023 Governor’s Race!