…for Max Baucus’ resignation in disgrace to be in order, this video probably ought to cinch it:

Baucus, whose role as the failed architect of the Senate version of Obamacare until Harry Reid took it over from him in order to buy off enough votes to get to 60 damaged his reputation enough as it was. Then it was revealed that Baucus put his former aide and current extramarital sex partner up for a U.S. Attorney job, in perhaps the most ignored major scandal of 2009.

And now the disgraced senior senator from Montana is exposed as a drunk who takes to the floor of the Senate to hold forth in a bourbon-soaked harangue against the intransigence of the Senate Republicans and how the GOP leadership “pressured” its members to vote against Obamacare. Perhaps in his sozzled stupor Baucus neglected to remember his own role in applying “pressure” during the health care debate, like for example when he stampeded the First Amendment rights of health insurers to communicate with their policyholders back in September. 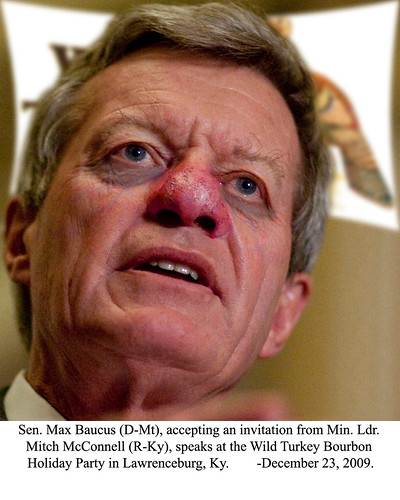 And here’s a recent shot of Baucus, taken on Dec. 23 as he spoke at a Beltway party thrown by Wild Turkey. Needless to say, a denial that he was drunk on that video – which is inevitable – doesn’t particularly mesh with our other photo.

If this disreputable, dishonest, adulterous souse of a man were a Republican, not a minute would go by without the legacy media howling for his resignation. Isn’t it time for some balance to the equation? Shouldn’t Baucus do the right thing, for once, and give up his seat to someone who won’t further disgrace the state of Montana in the United States Senate?