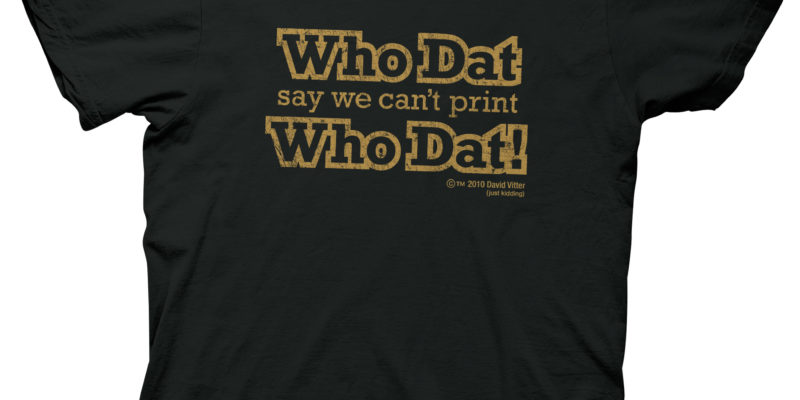 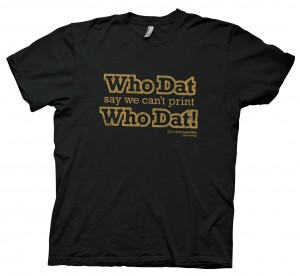 All week long, the NFL has been assaulting South Louisiana merchants who had the unlucky commercial judgement to peddle merchandise carrying the iconic “Who Dat” moniker, claiming that T-shirts, hats and other paraphernalia with “Who Dat” on them violated a 20-year old trademark. On Friday, the league ran up against a U.S. Senator sensing a great opportunity to put on a show for the voters in an election year.

And when Sen. David Vitter came to the fore, he gave the NFL little quarter. By Friday evening, Vitter had the league scuttling for the exits.

The fireworks began when Vitter shot off a letter to NFL commissioner Roger Goodell with the following message:

I was stunned to learn recently that the NFL is taking the position that it owns the exclusive trademark of the term “Who Dat” and has even threatened legal action against some mom-and-pop merchants selling t-shirts using the term. I would urge you to drop this obnoxious and legally unsustainable position and instead agree that “Who Dat” is in the public domain, giving no one exclusive trademark rights.

This letter will also serve as formal legal notice that I am having t-shirts printed that say “WHO DAT say we can’t print Who Dat!” for widespread sale in commerce. Please either drop your present ridiculous position or sue me.

“Who Dat” was probably first heard in New Orleans minstrel shows well over 130 years ago. Much more recently, but before it was used in connection with the Saints, it was used as a rallying cry by St. Augustine High School in New Orleans. In the 1980s it was adopted by Saints fans in a completely spontaneous way. Only later did any legal persons, including the Saints and the NFL, try to claim it through registration.

Under Paul Tagliabue’s leadership, the NFL was an unbelievable partner in helping us recover and rebuild after Hurricane Katrina. Thank you again. We look forward to your dropping your “Who Dat” position so that this partnership can continue without strain or blemish.

Vitter didn’t stop with just the letter, though. He actually had the T-shirt pictured above designed and, as of Friday night, off to the presses. And in a radio interview with the Michael Castner Show on WJBO-AM in Baton Rouge, Vitter announced he was selling the shirts at cost on his web site at DavidVitter.com starting Saturday.

What followed was a classic crawfish maneuver by the league – to such an extent that one wonders whether they won’t attempt to assert a trademark on cowardly mudbugs. Vitter got a letter from Jeffrey Miller, the NFL’s VP of Governmental Relations, which said they hadn’t seen the Senator’s letter yet but understood he had some concerns and wanted to “address what seems to be a significant misunderstanding as to the scope of the National Football League’s trademark enforcement efforts.”

The NFL’s letter went on to explain that they had NOT sought to exclude all uses of Who Dat in merchandise – only the ones with Who Dat and fleur-de-lis logos when those icons were paired with Saints trademarks. And further, the league says by doing so they’re protecting Vitter’s constituents who hold licenses to sell Saints merchandise, so, basically, there’s nothing to see here and let’s move on – and the controversy was driven by “misinformation,” which is a pretty insulting and patronizing position to take as though us dumb rubes in Louisiana have never dealt with copyrights and trademarks before.

Vitter wasn’t impressed. In his WJBO appearance he had seen the NFL’s letter and stated he was highly unimpressed by the partial backtrack by the league – understandable since the Senator had taken the position that the league had no right to enforce a trademark on a cultural icon ubiquitous within the public domain in Louisiana. The Senator called himself a “recovering lawyer” and asserted the league was in a poor legal position with its “Who Dat” stance, then vowed to press the issue until the NFL backed off completely.

Meanwhile, Vitter has set up an online petition on his web site so Saints fans can express their opinion to the league as well.

In a related matter, an employee of the Hu Dat Restaurant in Corpus Christi, Texas, who would not give her name, declared that to her knowledge the restaurant holds no license from the NFL and has no plans to secure one.