In a startling-yet-unsurprising discovery, blogger Doug Ross cites evidence uncovered by JudicialWatch.org through a Freedom Of Information Act request to the effect that Speaker Of The House Nancy Pelosi is transporting her in-laws, kids and granchildren on military jets.

Since Nancy Pelosi took over as Speaker in 2006, she’s rung up millions in military travel expenses to commute between San Francisco and Washington.

Worse still, she also appears to have requisitioned entire flights for the personal use of her children and grandchildren. That is, unaccompanied by any member of Congress, her kids, in-laws and grandchildren are utilizing entire military passenger jets for their routine travel needs.

Using the documents obtained by Judicial Watch’s Freedom of Information Act (FOIA) requests, I have discovered the following manifests and travel requests. 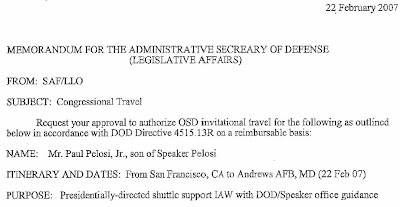 22-Feb-2007: A military jet is requisitioned for the sole travel needs of the Speaker’s son, Paul Jr.

13-Apr-2007: A military jet is utilized for the unaccompanied travel of the Speaker’s daughter, son-in-law and grandson.

15-Jun-2007: A military jet is requisitioned for the sole travel needs of the Speaker’s son, Paul Jr.

Ross has a lot more, and it’s worth a read.

Previous revelations about Pelosi misusing military aircraft for her own purposes made the talk radio circuit last summer, and nothing much came of it. But these new revelations explode any pretense that Pelosi was flying Air Uncle Sam as part of her elected duties.

The question is, should Pelosi’s nearly-outright theft of public dollars through appropriating the Air Force as a taxi service for her friends and family be grounds for her immediate removal as the Speaker.  You’d think that’s an easy question – Ross certainly says she has to go, but it may not be so simple.

The fact is, Pelosi’s stealing from the taxpayer shouldn’t just be grounds for her removal as speaker – or even her resignation from Congress. I don’t want to see that. What I would prefer is for her to stick around as Speaker, run her idiot mouth about climbing fences and pole vaulting in order to subvert the will of the American people and so enrage the populace that the Democrat House Majority vaporizes into history in November. A Steny Hoyer speakership holds no value; Hoyer might not be an unhinged, anti-American criminal in the way that Rep. Botox is, but he will still carry water for the Obama administration at its command.

So while these revelations are disgusting and certainly warrant the removal of the Speaker, the suggestion here is let’s wait and fix the whole thing in November. But her behavior needs to be remembered and repeatedly described between now and Election Day.