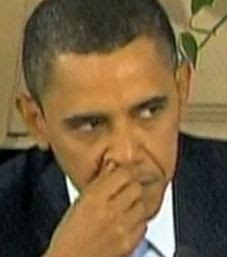 After having endured four of the 6 1/2 hours of the Health Care Summit (also known as the Blair House Project) today, I offer the following observations:

First, if the Obama administration intended for this event to promote its health care plan in the public eye, it was a major mistake. Not only was the president and particularly the Democrat leadership unconvincing, they were unable to score a single factual point in the entire time I was watching despite having about two-thirds of the airtime.

Oh, sure, we were treated to government-by-sob story again and again, and there was a great deal of “You’ve got your facts wrong” aimed at Republicans. But there was never a time that I could see in which any of the Democrats could point to either examples of their programs working at the state level or in another country. They didn’t do anything to convince anyone, and they didn’t appear to be able to talk about their proposals on any level other than what they “don’t” do.

In other words, Obama’s side, despite holding the floor for the lion’s share of the time, seemed like they were on defense all day. That can’t have been what he was looking for.

Unless, of course, the plan all along was to throw the Republicans a bone before ramming through whatever he wants on reconciliation or other “non-traditional” means.

But if that’s the game, Obama did a lot more damage than he needed to his party line.

The “Party Of No” thing was buried today, for example. It died as soon as Tom Coburn and Paul Ryan got a chance to speak, because Coburn and Ryan, among others, brought a wealth of facts, numbers and philosophy to the table. They exploded the myth that the Republicans don’t have any ideas of their own, and if Obama or his acolytes try to trot that one out again they’re going to look stupid.

The Left as the nice guys in this debate also took a hit. When Lamar Alexander, who comes off as a cross between Ned Flanders and Mr. Rogers, was the GOP’s opening speaker and the Democrats brought out Harry Reid, it was a palpable difference. And when Obama arrogantly threw out the line that he didn’t count his time because he’s the president, it didn’t help. Obama calling the senators and congressmen by their first names, particularly in the case of John McCain where he threw in the added insult of informing him that the campaign is over, was disrespectful and stupid on his part and gave the American people a takeaway from the event that represented an unforced error. Also, when Ryan mentioned that state legislatures have a hand in regulating health insurance and that it’s not like they can’t do a decent job, and the response he got from the Democrats was that “it depends on who we’re talking about,” it was a bit of hubris they could have done without – after all, a recent poll found that 71 percent of the American people think Congress is doing a “poor” job; for the majority to demean anyone else’s capabilities just makes them look even more out of touch than they do already.

Will today’s confab change anything? No. The majority of the American people hate this plan and won’t support it, it’s still poison for the Democrats to try to push it through, there is still a deficit of votes available for them to get it passed, and they’re still bound and determined to force it down America’s throat. Which means Punxatawney Phil sees his shadow and we’re getting six more weeks of Obamacare.

At this point, the GOP probably ought to be happy to keep this issue going on forever. The longer healthcare goes on, the less opportunity for any other major abusive federal legislation to get passed. And the longer it goes on, the easier the road to a majority in both houses becomes. In other words, if your enemy is busy hanging himself, just get out of the way. For this to work, however, the party is going to have to maintain discipline and do what it can to recruit turncoats from the other side – either party-switchers like Parker Griffith or just conscientious objectors like Bart Stupak or the newly-minted Ben Nelson. A final vote on this package, in which it goes down to defeat, would almost be anti-climactic at this point; this has gone from an apocalyptic initiative to a pinata. And everybody likes a pinata.

But for the administration, today’s dog-and-pony show didn’t move the ball an inch – when progress was crucial. In that sense, this was six hours of epic failure.

Interested in more national news? We've got you covered! See More National News
Previous Article The Star Of The HealthCare Summit Was Paul Ryan…
Next Article Believe It Or Not, Civility Still Rules In America By Comparison