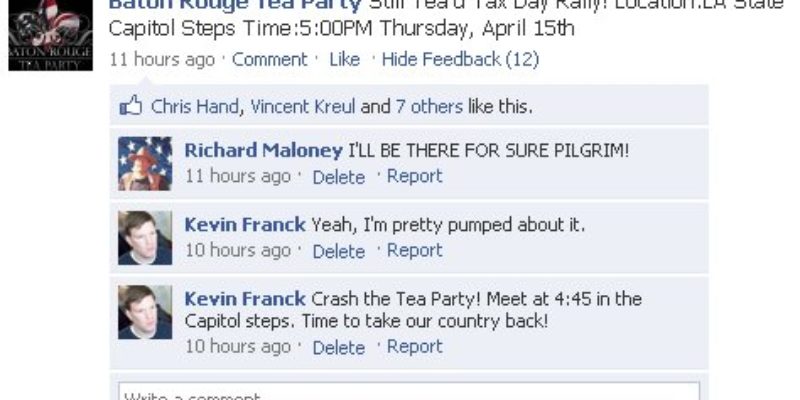 Looks like the Louisiana Democrat Party is planning on participating in today’s Tea Party rallies, and the one planned for 5:00 on the steps of the Louisiana State Capitol in Baton Rouge in particular.

Just not in a constructive or supportive way.

On the party’s Facebook page, we’ve found this from yesterday:

Crash the Tea Party! Meet at 4:45 tomorrow on the Capitol steps in Baton Rouge. Time to fight back!

Charming comments under it as well:

Louisiana Democratic Party: The teabagger thugs will be out in force. So everyone by careful and use the buddy system.

David Bibbins: I wish I could be there but I have to work. Let’s throw this TEA in the MISSISSIPPI where it belongs!!!!!!

There has been a lot of talk about left-wingers putting a movement together in an attempt to “crash the Tea Party,” and a decent amount of discussion and debate about who those people might be. Here in Louisiana it looks like we know who they are. They’re the state Democrat Party.

So if there is violence today on the steps of the Louisiana State Capitol, given that previous Tea Party rallies at that location have been very peaceful (the Tea Party folks even clean up after themselves), we’ll know in advance who bears responsibility. If you’re going, be safe, try not to let things get overheated and by all means RECORD EVERYTHING.

There was once a time in America when a story like this would have been farfetched: “New Hampshire Democrats are engaged in a statewide search for liberal activists willing to attend so-called tea parties on Thursday and carry signs expressing racist or fringe sentiments, a Democratic source with knowledge of the effort tells NowHampshire.com. According to the source, who sought anonymity for fear of reprisals, the Dems’ last minute scramble reflects a growing obsession among party leaders that they need to discredit the tea party movement soon or it will overwhelm them come the November election. Former Democratic State Party Chairman Kathy Sullivan is heading up the search, the source said. Sullivan has been calling and e-mailing liberal activists trying to get them to attend tea parties in different parts of the state and hold signs denying the authenticity of President Barack Obama’s birth certificate and make racially disparaging comments to reporters.”

So, just to clarify, the contention of these liberals is that the tea parties must be demonized and discredited because they’re full of violent, angry, often gun-toting extremists with temper-control issues, and their plan to expose this fact is to walk into the middle of a large crowd of said short fuses, who are fed up with being painted as lunatics, carrying obviously outlandish and offensive signs, and then start making racist comments. I presume these liberals think everyone around them will nod approvingly as they insist that the rally’s focus is not runaway spending and the growth of government, but the importance of exposing the president’s role as the greatest Kenyan Deep Cover Agent ever.

Okay, Poli-Cylons, go for it. I just hope you folks studied up on how to make a tourniquet out of a Gadsden flag.

At the Jawa Report, the Good Lieutenant is ready to rumble: “Here’s what you do — charge your batteries, set your video recorders to TRUTH and shoot away. Make sure your batteries are charged, because the really dedicated trolls will be trying to make trouble all day. I suggest that if you catch one of these [?#%&!] doing what they’re claiming they’re going to do, follow them around for the rest of the day with a video camera and don’t let them out of your sight. If you see these clods talking to reporters, bust up their interviews, give handouts to the reporters and make sure the journalists are never alone with these people. Chances are that the journalists will be sympathetic to the O-bots, so it’s incumbent upon you to make sure these little leftist Obama bootlicker creeps do NOT go unchallenged at any time in front of the media.”

At QandO, Bruce McQuain is confident that the truth will out; it’s not like those who want to spike the tea with a little bamboozle are showing up ex nihilo. “As for the Tea Partiers — get plenty of pictures and videos whenever you see something that casts your group in a bad light. Then get them up on the ‘net. Someone will recognize the person shouting the slur or holding the unacceptable sign. And someone will also know their background. TPers also need to visibly and loudly repudiate such people (as they did to the person who yelled an anti-gay slur at the HCR event) at the moment their utterance is made or their sign appears.”

A commenter at Ann Althouse’s site suggests, “A vicious beating of racist sign-bearers would help, but I’d wear an SEIU, Che, or Obama t-shirt to do it.”

UPDATE #2:  In case you’ve been following our coverage of the Brennan’s incident, you might remember that the Iron Rail Gang’s demonstration outside of Brennan’s contained the exhortation to “fight back,” too. We ultimately saw the results of that.

UPDATE #3: Just in case Louisiana Democrat Party spokesman Kevin Franck decides to head for the hills and pull references to the exhortations to his people to “Crash The Tea Party,” he’s been caught on camera: 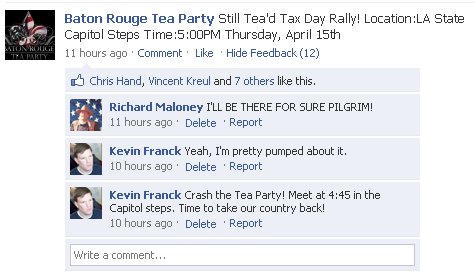