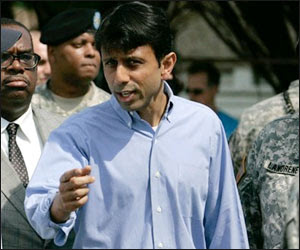 In New Orleans this afternoon, Louisiana Gov. Bobby Jindal let fly with a torrent of invective in describing the red tape surrounding the federal government’s shutdown of the state’s dredging operations in the Chandeleur Islands. Jindal not only challenged the wisdom of the Interior Department’s order to stop the dredging, he noted that the management of the Chandeleur’s by the federal Department of Fish and Wildlife has been an exercise in abject failure.

“We got word yesterday that federal officials were going to shut down our dredging operations on the North Chandeleur Islands and those operations were indeed stopped under the federal government’s command at 6PM last night.

“Our request here today is simple,” said the governor. “We are again calling on the federal government to allow us to continue these dredging operations as we mobilize pipe for another two miles – which will take around just seven more days. Getting this pipe in place without stopping the dredging operations will allow us a seamless transition as we move the dredge to a new borrow site. After this pipe is in place, our dredger can disconnect and move to the next site where it can then resume dredging operations in just one day.

“We have told Col. Lee of the Army Corps of Engineers and every federal agency that we are in an emergency situation here. This is a disaster for our state. Days count. Hours count. We cannot wait for more conference calls and meetings for discussions. We need to adapt to the situation on the ground and continue our dredging operations for as long as possible until we can move to the next borrow site and continue to create sand boom.”

Over 5,000 feet of sand berm has been created in the Chandeleurs, in addition to 2.5 miles at East Grand Terre. Jindal has previously noted that sand berm can be highly effective in trapping oil, thus keeping it from coming inland into Louisiana’s estuaries and marshes.

“We have jumped through every hoop that the federal government has placed in front of us since this spill started,” he seethed. “On May 2, we submitted our initial boom plan to the Incident Command Post since there was not a plan. When BP and the Coast Guard were unable to provide the appropriate boom resources, we began developing innovative solutions like Tiger Dams, air-dropping sand bags, Hesco baskets, opening all freshwater diversions, vacuum barges and many other alternatives.

“On May 11th, we submitted a proposal to the regulatory agencies, BP and the Coast Guard to approve our sand berms. It took almost a month for the federal government to approve the plan and make BP pay for the work. Meanwhile, we had millions of gallons of oil covering our wetlands, killing our wildlife and forcing our people out of work.”

Jindal then took aim at the U.S. Fish And Wildlife Service, which controls the Chandeleurs as a wildlife refuge. He showed a map of the erosion of the chain from 2001 to 2005 and delved into a short history of the disappearing islands.

“People used to live on these islands,” he noted. “It was a fishing community and even had some farming. From the mid-90’s until recently, the islands lost up to 300 feet per year under U.S. Fish and Wildlife Service management.

“Now, this same agency has concerns that we are not being sensitive to the islands by wanting to continue to dredge for seven more days to ensure a smooth transition?

“They have not invested a penny in this area and are allowing it to erode at extraordinary rates. Meanwhile, they invest millions in other refuges in other parts of the country.

Jindal then answered the concern that dredging where the state has dredged is a hazard to the islands due to currents and tides.

“We have said from the beginning that we would backfill any dredging that would adversely affect these islands. That commitment still stands. Shutting down dredging operations while oil continues to hit our shores and the oil continues to flow into the Gulf is absolutely absurd. We need to act now.

“The area where the state was dredging remains within the area permitted by the federal government. When the dredging contractor began operations, the U.S. Fish and Wildlife Service voiced objections to the location of the dredge. In an effort to prevent delay to the project, we worked out an agreement that would provide for backfilling the dredge site and the movement of the dredge vessel to a new location. The state remains committed to moving the dredge to another location within the permitted area and backfilling the first dredge site.”

The Governor then launched into a long riff on the Obamoratorium and the federal government’s attempts to stand it back up after U.S. District Judge Martin Feldman dismantled it with a preliminary injunction yesterday.

“The federal judge’s ruling yesterday to grant an immediate injunction on President Obama’s deepwater drilling moratorium was welcome news. We absolutely agree with the judge’s conclusion that the Administration’s six-month, or longer, shut down of deepwater drilling was ‘arbitrary and capricious.’

“Not only does the moratorium threaten thousands of direct jobs in our state, it also jeopardizes many other industries that supply our oil and gas industry and the entire communities that depend on them. It is also deeply concerning that the President’s moratorium was enacted against the judgment of the Department of the Interior’s own expert advisors and scientists.

“The Administration now says that they will immediately appeal the ruling. They just don’t seem to understand that you can’t just turn a switch on and off with these rigs. When they leave our coast to produce oil in other parts of the country or the world, the jobs that support them go too. We absolutely do not want another spill or one more drop of oil on our coast or in our water, but thousands of Louisianians should not have to lose their jobs because the federal government can’t adequately do their job of ensuring drilling is done safely.

“The federal government has an entire agency dedicated to monitoring safe drilling. It shouldn’t take them six-months or longer to ensure safety measures are in place and their laws and regulations are being followed. Instead of an arbitrary moratorium, the Administration should listen to their own experts and enact the specific recommended steps from their own experts to ensure proper oversight and safe drilling.

“As Judge Feldman stated in his preliminary injunction ruling yesterday, ‘…the Secretary’s determination that a six-month moratorium on issuance of new permits and on drilling by the thirty-three rigs is necessary does not seem to be fact-specific and refuses to take into measure the safety records of those others in the Gulf. There is no evidence presented indicating that the Secretary balanced the concern for environmental safety with the policy of making leases available for development. There is no suggestion that the Secretary considered any alternatives: for example, an individualized suspension of activities on target rigs until they reached compliance with the new federal regulations said to be recommended for immediate implementation.’”

The Governor added, “The Commission that was supposed to study the moratorium for the President for six months now says they won’t have their first meeting until mid-July and they won’t finish their report until next year.

Jindal also noted that the Obama administration’s claim that BP will be picking up the tab for losses suffered as a result of the Obamoratorium is spurious.

“Moreover, the $100 million set aside by BP to offset the wage losses of deepwater rig workers will cover only a few weeks of lost wages for those workers – and these funds will do nothing to offset the hundreds of millions in wage losses for workers in support industries that count on deepwater drilling activity for their livelihood. Today, BP told us for the first time that they will not pay for moratorium-related losses above the $100 million.”

Interested in more national news? We've got you covered! See More National News
Previous Article Aw, Man, What The Hell Is This?
Next Article Cassidy: Put Science Before Politics For The Sake Of The Gulf