As of today, 25 states have held primaries, and Congressional filing has concluded in 41 states.  There will be some more interesting races this upcoming Tuesday, when North Carolina, South Carolina, and Utah hold elections. We are particularly interested in South Carolina and Utah.

Utah is holding a Republican primary to choose a nominee to replace Bob Bennett (you may recall that he was denied renomination in his party’s primary), and the defeated incumbent has endorsed businessman Tim Bridgewater, adding that Bridgewater “…brings a businessman approach to political issues.” The Democrats are also holding a primary in a Salt Lake City based House district, as 10 year incumbent Jim Matheson is facing a stiff challenge from Democratic activist Claudia Wright. There have been rumors in that race of local Republicans executing an “Operation Chaos” (i.e., getting Republicans to vote for the more liberal and theoretically weaker challenger).

South Carolina – Though a gubernatorial and four Congressional runoffs on the GOP side will be held, we are particularly interested in two Congressional runoffs: in a seat up in Greenville, incumbent Bob Inglis has a TARP vote on his record and was humiliated by trailing in his own party primary 27-39% – it is entirely likely he will be the fifth incumbent to lose in a primary. Down in Charleston, Tim Scott (who led 31-16% in the primary), seeks to become the first African-American Republican in Congress since J.C. Watts retired in 2002.

After Tuesday’s primaries, things slow down. Though Congressional filing will conclude next month (including the July 7-9 filing period for Louisiana races) for the remaining nine states, July will be a relatively quiet month for primaries, as the only action will be runoffs in Alabama and primaries in Georgia and Oklahoma. Things do pick back up in August, as 12 states hold primaries. In these series of elections, it’s possible that 1-3 Senate incumbents (including Arizona’s John McCain) may join the ranks of those defeated in their own primaries.

This midterm election year will result in a torrent of polls that will be released on a daily basis on various websites. From now until Election Day, we will compile and analyze those polls for you for 435 House races, 36 Senate races, and 37 Governor’s races. Our calls on individual races will be based on the following criteria:

(1) Safe Democratic (dark blue on the map)/Safe Republican (dark red on the map)– either a candidate leads by 10 or more points, or a candidate has over 50% in a composite of recent (currently, “recent” is defined as the last 28 days)polls;

(4) No data available/primary has not been held (gray) – until the party nominees have been selected for competitive primaries, we will not be analyzing polls for that race. In other words, we will not be assessing the races in 25 states until (in some cases) mid September;

In a previous article, we listed five criteria to determine whether a Democratic incumbent or an open Democratic seat was vulnerable to takeover. Now that 25 primaries have passed, polls are being released now for individual House races, and we can therefore supplement our theoretical criteria with actual data (poll results) for states that have already held their primaries/runoffs. Using that criteria, we had previously projected a net GOP House gain of 78 seats. Recent polling data, however, suggests that two more Democratic seats previously rated as safe are now “Safe Republican” – the seats of Travis Childers (D-Mississippi) and Stephanie Herseth Sandlin (D-South Dakota). This means we are revising our estimates to a net GOP pickup of 80 seats. Furthermore, recent polls also show that there are three more safe Democratic seats where incumbents are leading but are all polling  in the 45-46% range: Heath Shuler (D-North Carolina), David Wu (D-Oregon), and Ben Chandler (D-Kentucky). Finally,  a recent poll on “Democrat behaving badly” Bob Etheridge (D-North Carolina), shows him trailing 38-39% against his (until now) little known Republican opponent. That same poll shows that 84% of district voters are aware of his assaulting two college students. 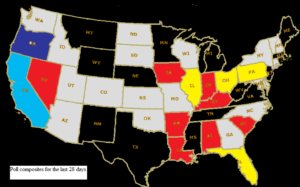 While the House/Senate races are important, the 37 Governors races this year are similarly worth watching, because not only can governors set policy, but with reapportionment looming next year, they can play a part in the partisan composition of the House of Representatives for the 2012-2020 election cycles. So far, primaries bave been held in 16 of the 37 states holding Governor’s races, so we will start tracking those races based on available polling data using the same criteria as the Senate and House races. 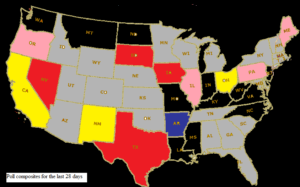 John is a political consultant and blogger with JMC Enterprises with expertise in poll sample development and analysis, development of targeted voter files for phone canvassing or mail outs, campaign strategy and demographic consulting, among other things. See his site at WinWithJMC.com for more information.
Interested in more national news? We've got you covered! See More National News
Previous Article Obama Reaffirms Louisiana’s Economic Death Sentence
Next Article We Don’t Have Much To Add To This…