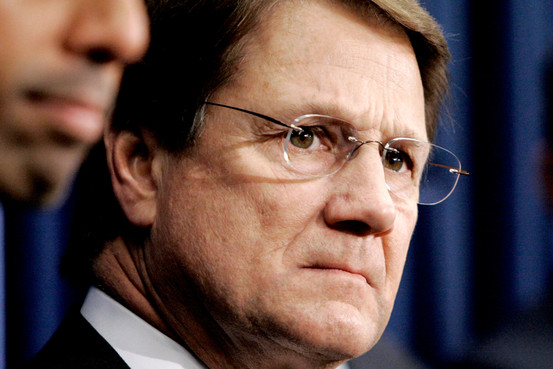 Today there was a hearing at the House Energy and Commerce Committee in which the five largest oil companies were represented by top executives. That number included Lamar McKay, the CEO of BP Americas. The execs were grilled relentlessly by the committee, and the four other oil companies more or less threw BP under the bus.

But one member of the committee was absent. Strangely, that committee member hails from the congressional district most affected by the Gulf oil spill.

Charlie Melancon, the representative of Louisiana’s 3rd District and a candidate for the U.S. Senate, skipped the hearing.

Melancon just two weeks ago started an online petition to fire BP CEO Tony Hayward. Hayward wasn’t on hand at the hearing, as BP was represented by its regional head, but the Congressman still had an opportunity to tear into the company on behalf of his constituents. He wasn’t there.

The reaction by the opposing camp in the Senate race, which Republican pollster Magellan Strategies says is a 20-point blowout and Democrat pollster Public Policy Polling concedes is a nine-point margin, seized on the opportunity the gaffe presented.

“This oil spill is causing thousands of Louisianians to lose their jobs, but Melancon can’t even show up to his,” Luke Bolar, spokesman for David Vitter for U.S. Senate said. “Melancon showed a real lack of concern for safety on rigs, Louisiana jobs, and making sure BP pays for all claims. While he has been making a big stink about firing BP’s CEO, Melancon skips the chance to talk to their President. In typical Melancon fashion, he puts his own political interests in front of Louisianians. Melancon’s constituents must be furious that the person they elected to serve their district won’t even go to bat for them.”

The Vitter campaign noted that Melancon had quit the House Budget Committee in March, just before the markup of the Obamacare bill. “Melancon said he does not have time to deal with the budget committee, given all the major legislation moving through his other committee, the House Energy and Commerce Committee.”

The Times-Picayune had the story on March 4…

Melancon said he does not have time to deal with the budget committee, given all the major legislation moving through his other committee, the House Energy and Commerce Committee. In the fall, he also gave up his leadership position in the House Blue Dog Coalition, a group of fiscally conservative Democrats, to devote more time to his legislative duties on the energy committee.

“I would have liked to have stayed on (the budget committee), but physically it has become impossible,” Melancon said. He said that on most days, he doesn’t have time for lunch “because I’m booked up all the way through.”

This begs the question – what is Charlie-Boy doing with his time? And if he can’t handle his responsibilities as a congressman, what makes him think the people of Louisiana will give him a shot at being a senator?

UPDATE: The candidates for Melancon’s seat in the upcoming are weighing in, and they’re not impressed…

“I care not to comment on the whereabouts of the Congressman. However, if I were the Congressman for Louisiana’s 3rd District, I assure you that unless I was at Port Fourchon or Grand Isle working with our fisherman and local leaders to help clean up our coast, I would be at that committee hearing listening, learning and trying to understand how we prevent another disaster of this magnitude.

That is why I am running for Congress, to fight for the people of South Louisiana and the industries that drive our economy.”

“In the middle of a Presidential Disaster, Southeast Louisiana cannot afford to miss an opportunity to defend the thousands of Louisianans whose jobs are at risk in the oil and gas industry or the chance to ensure that a disaster like this doesn’t happen again.”

Interested in more national news? We've got you covered! See More National News
Previous Article More on the Louisiana Senate Race Poll
Next Article Could The Stars Be Aligning For Cao’s Re-Election?