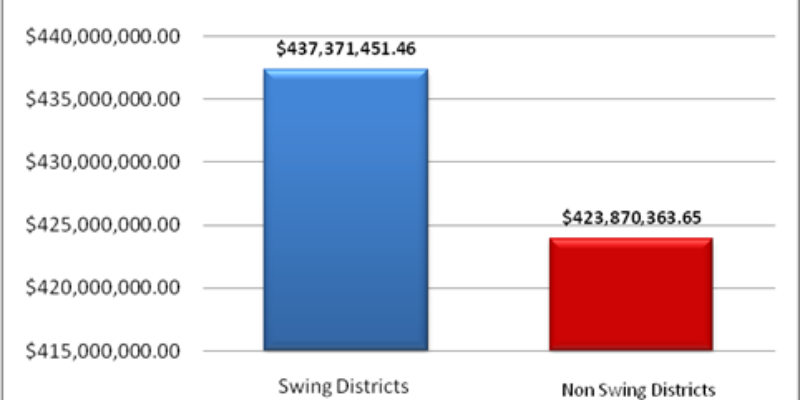 While browsing through the Hayride archives recently, I ran across my first post, which Scott was kind enough to publish early last November.  Having evolved into somewhat the “energy and environmental” guy at the site, it was fulfilling to reread my attempt to weave together the variety of goings on in the Obama administration, and to realize, sadly, how many of my prognostications are materializing.

As predicted, it appears that stimulus money may be being spent to influence the voters in “swing” districts.

Remember “shovel ready projects?”  TARP funding was intended to boost the economy by hustling construction workers back to the field to build roads and bridges, designs for which were complete, but funding was non-existent.  TARP was going to fix that, but instead has been used to keep public employees represented by SEIU and the teacher’s unions employed.  And, a great deal of that money has not been committed at all!

… note that the greatest bulk of the stimulus money has not been spent, but rather sits in Treasury Department coffers until Tim Geithner, Secretary of the Treasury, decides when and where to spend it. What might really be up with that?

The mid-term elections are over a year away, and the American electorate has a historically short memory. Many will forget unwanted healthcare reform being forced on us against our wishes when, lo and behold, stimulus money suddenly gets released …

Fortunately, a portion of that prediction is not occurring, as the electorate is not forgetting the healthcare debacle – there have been numerous reminders, such as the Arizona immigration lawsuit, financial reform legislation, the Gulf oil spill mismanagement, and countless vacations and golf outings.  But as Veronique de Rugy points out over at Big Government, there is significant evidence that stimulus money is now being released, and is being distributed with a favorable bias toward districts in which Democratic candidates are most vulnerable.  As this graphic clearly indicates, 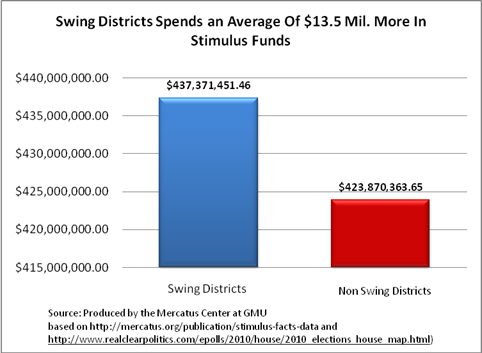 such districts are receiving, on average, $13,501,087.81 more in stimulus distribution than are non “swing” districts.  We are skeptical that this is a coincidence.

We know that Keynesian economics doesn’t work.  The utter failure of the stimulus programs to date to reduce unemployment, the deficit, foreclosures, or bankruptcies, have convinced all but the most hard core “progressives” of that.  The release of government funds into a local economy will cause local business to retract, retreat, sit on its capital, and resist hiring.  Perhaps we should encourage this bias not only to continue, but to be expanded, so “swing district” economies suffer further, and their Democratic candidates along with them.

While we are reluctant to wish ill on any segment of the economy, we have no such reluctance when it comes to the Democratic Party losing its hold over Washington.