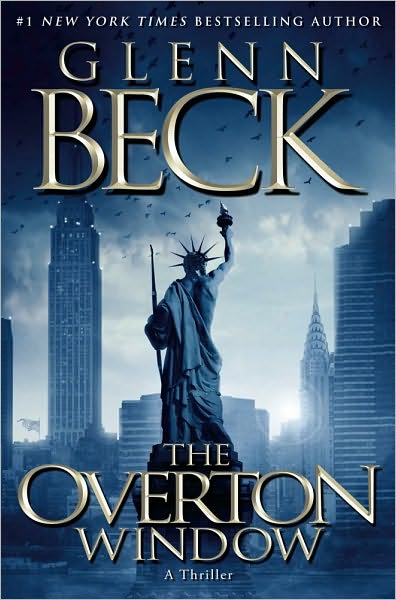 Other readings in this series…

After The Hangover, by R. Emmett Tyrrell
The Obama Diaries, by Laura Ingraham
Nullification, by Tom Woods

One thing about Glenn Beck, whether it’s his TV show, his radio show, his books or whatever else he does – he’s not boring.

That’s a talent to be admired, particularly in someone who is as exposed and prolific as Beck is. He’s goofy as often as not, he’s not always right, he cries too much on the air and he doesn’t come off as a particularly highbrow guy. But because of the somewhat off-the-wall character of his offerings, you never know what you’re going to get – it might be brilliant, funny, strange, kooky or all of the above.

And so in picking up The Overton Window, Beck’s first stab at authoring novels, I had little idea what to expect. The advance publicity of the book held it forth as a thriller, perhaps a strange cross-pollination of Ayn Rand’s Atlas Shrugged and some of Vince Flynn’s darker novels about federal corruption leading to disaster.

And that’s more or less what Beck’s novel is.

He said upon the book’s release that the dystopian America it portrays is one he hopes we’ll never see, though elements of it do seem somewhat familiar in an undefined, ephemeral sort of way.  It’s an America in which those in power take great pains to propagandize and thus control the masses, in which force is used as an anvil to deception’s hammer and in which a gaping disconnect between the ruling class and the rest of the country threatens the very fabric of society.

And an America in which the solution is to strip away the country’s character completely, in order that the ruling class might control the masses more efficiently and overtly.

The book’s title comes from a concept developed at the Mackinac Center for Public Policy, a Michigan-based conservative think tank, whereby there are stages of public acceptance of ideas depending on the current understanding of the issues which surround them. For example, it took the Civil Rights movement to make the concept of affirmative action even remotely possible; in this formulation, it was necessary to “move the window” in order to enact such policies. The idea of gay marriage just 20 years ago was completely out of the mainstream; now it’s within the Overton Window. Or the idea that tax cuts could stimulate the economy and thus produce an increase in government revenues, which though it had been successfully proven in the 1920’s and 1960’s was still outside the realm of “normal” – it took a lot of rhetorical heavy lifting by Jack Kemp and Ronald Reagan in the late 1970’s to bring supply-side economics within the Overton Window.

And in Beck’s novel, the idea that American government and policy should cease to be within the realm of We The People and instead be handled by the elite is the subject of an attempt at moving the window.

The protagonist is Noah Gardner, the scion of America’s most successful public-relations firm. Gardner’s father Arthur, a legend in the business, is grooming him to take over – but he lacks the ruthlessness and big-picture understanding of his old man. At 28 years old, Noah is more of a fixer, a tactician. He knows how to get small things done. As to politics and power, he’s gleefully ignorant.

But Gardner’s life begins to change when he meets a girl. He steps out of his ruling-class lifestyle and into a counterculture loosely resembling the Tea Party. And when he does, he begins to see in ways he has not previously understood how the ruling class maintains power – the ugly underbelly of its practice of control.

From there, Gardner is carried along on a cross-country adventure ending in a near-tragedy and a change in the Overton Window. He’s not changed, and the counterculture in which he’s immersed does survive, but things do get worse.

The book has been panned in the Washington-New York media axis, though it’s a huge commercial success. It’s an interesting novel, and after a slow start of sorts it does move along nicely. To say it’s a groundbreaking work would be pushing it, though. The novel is fairly derivative; it’s almost a medley of Rand, Flynn, Orwell and others. It’s readable but not fabulously written. And while it will induce you to turn the page there are few surprises along the line. It’s also relatively interesting in its weaving of real-life examples of manipulation into the narrative, though along the way it is somewhat suggestive of tinfoil chapeaux – as Beck is accused often. Whether some of the loopier references are aimed at tweaking his critics, it’s hard to say.

But while much of the alarm Beck seeks to raise in The Overton Window over the slow slide into tyranny he sees in our country is perhaps overblown – the Tea Party movement itself is proof that America simply will not accept the kind of control by the ruling class he writes into his novel – it does make valid points. Our culture and politics are often manipulated by our elites. Deception does abound. There are examples, thankfully few, of law enforcement being abused. Our freedoms do appear under threat, though not in the overt ways Beck discusses in The Overton Window.

It’s worth a read. Will it make your personal
Big Top 10? Probably not. But as a novel to fill a few hours on a plane or a rainy Saturday, The Overton Window is entertaining and thought-provoking enough to do the job.