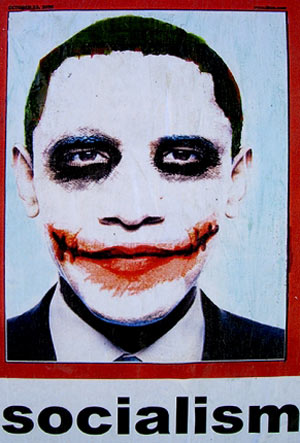 NRO’s Jim Geraghty hits it pretty much on the nose…

This can’t really be the plan. The fact that President Obama and his top strategists think their most effective argument in the final three weeks before Election Day is that they suspect, without evidence, that the U.S. Chamber of Commerce is using foreign money to finance its most recent advertising campaign — that pretty much defines desperation, right?

“Do I really look like a guy with a plan?”

To really understand all this stuff, you’ve got to go back to Saul Alinsky and Rules For Radicals, which still appears to be Obama’s bible.

Rule 11: Pick the target, freeze it, personalize it, polarize it. Don’t try to attack abstract corporations or bureaucracies. Identify a responsible individual. Ignore attempts to shift or spread the blame.

And this is what the President and his people have been attempting to do since he took office. Or even before.

Rush Limbaugh was the first picked/frozen/personalized/polarized target. But with three hours a day and an audience of some 20-odd million politically-engaged listeners, it didn’t work too well.

Then it was Dick Cheney’s turn. And that went even worse, because regardless of how badly demonized Cheney was in the media and how unpopular with the Left (and the general public as well in the aftermath of the Bush administration), the last thing you want to do is get into a debate on national security with Dick Cheney. Obama lost that one, and he reaped the unintended consequences of elevating Cheney’s daughter Liz, who is just as articulate and passionate a critic of the president as her father is, into stardom.

Obama then returned to bashing President Bush, which was the central theme of his 2008 campaign, and he lost that one as well. Because Bush gave his successor the complete silent treatment, refusing to answer Obama’s attacks out of a sense of decorum. The voters have taken that as a show of class, which many believe Obama lacks. He’s suffered in comparison – particularly since Obama has generated no real progress from the end of the Bush presidency to now and a growing number of Americans actually say they’d prefer to have Bush back in office to the guy criticizing him.

While the Bush-bashing isn’t over, we next saw Karl Rove enter Obama’s crosshairs. But while lots of folks on the Left and the Right alike dislike Rove, the idea that an entire administration would engage in attacking a private citizen doesn’t really resonate with the public. And Rove, for all his faults, isn’t bad on TV. He can defend himself fairly well.

John Boehner is the most current individual target, and he’ll remain in the crosshairs for some time. But the problem with attacking Boehner is that nobody knows who he is. Now that he’s the subject of an unpopular president’s attacks, there’s a sizable risk that the public might decide it likes Boehner better than Obama once it gets to know him. Boehner is a little on the bland side, he smokes, he’s taken lots of money from lobbyists (just like every successful politician in Washington has) and he’s got a tan far, far too deep for a congressman from Ohio to have – but he’s also a good bit closer to mainstream America both personally and politically than the President is. So it’s risky to be targeting Boehner, even if it makes sense to attack the Speaker of the House when he or she is of the opposite political party (perhaps Bush should have gone after Nancy Pelosi a bit more in 2007 and 2008).

What is apparent from watching the administration attack individuals, though, is that Rule #11 doesn’t work when you have more power than the target does. Rather than advancing your cause by speaking truth to power, you just look like a bully.

So Rule #11 has been bent a little of late. The administration seems to have dumped the part about not attacking abstract corporations or bureaucracies in favor of a more general “they” – as “they” can’t fight back the way an individual can.

There have been a few examples of this – doctors who chop off feet or pull out tonsils for fun and profit, evil insurance companies, BP and so on. Now we’re on the Chamber of Commerce and foreigners.

The fact that the Obama administration has no room to talk about taking foreign contributions and that 43 percent of the Chamber’s donations this year have gone to Democrats doesn’t make them much of a “they,” either.

But if you’re an Alinskyite one-trick pony, you don’t have much else to go on. Alinsky teaches how to disturb the peace and destroy institutions; he offers very little on how to build or govern. Those things take useful knowledge, and probably some talent – commodities in acute deficit with the crew in charge of the country.

The American people are realizing this. They will punish accordingly starting on Nov. 2.