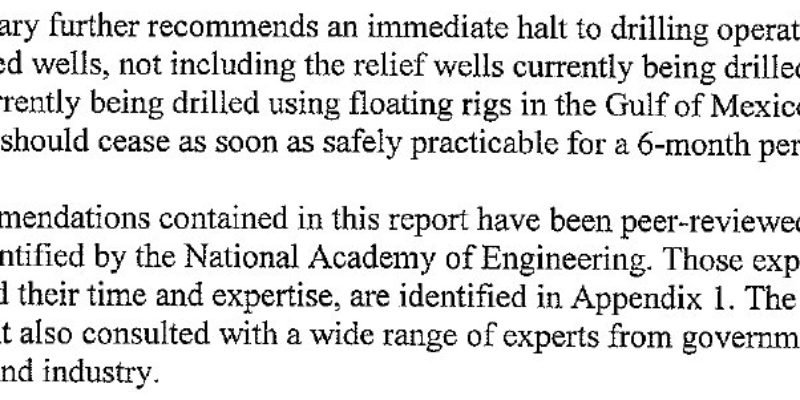 UPDATE: Rep. Scalise has a release out on the IG report…

“The Inspector General’s report confirms that the decision to impose a drilling moratorium was based on data that was manipulated by the Administration,” Scalise said.  “This is a troubling finding, especially considering that more than 12,000 people lost their jobs due to this political decision that ran counter to the President’s own hand-picked scientific experts. The Administration needs to come clean and explain to the American people why they manipulated the peer-reviewed data to reach a political conclusion that is still keeping thousands of people from working safely in the energy industry.”

ORIGINAL: It’s two parts whitewash and one part inconclusive, but the Department of Interior’s Inspector General released a report yesterday on the process by which the Department imposed a moratorium on deepwater offshore oil drilling in contravention of the advice of its expert peer-review panel following the Deepwater Horizon accident in the Gulf of Mexico in April.

And that report indicates that the statement of the moratorium was doctored by the staff of White House climate czar Carol Browner to – inadvertantly or intentionally – suggest that those experts had recommended a moratorium.

After the Deepwater Horizon exploded and sank on April 20, the Department of the Interior put a moratorium on issuing new drilling permits. That moratorium was extended for six months with respect to deepwater drilling on May 27, and the “30-day report” announcing the 6-month moratorium implied that it was signed off on by a panel of experts Interior had convened to review the state of Gulf drilling.

Immediately after the report was released, the experts consulted by Interior threw a fit at the text above, because it was their specific recommendation that the moratorium NOT go into effect. And when the experts went public with their objections, Interior did some crawfishing behind the scenes and apologized for any misperceptions which may have arisen from their report.

Of course, those apologies didn’t get the press that the moratorium got. So on June 16, Sen. David Vitter and Rep. Steve Scalise fired off a letter to Interior’s Inspector General demanding to know how the report came into being as written. That demand was echoed by several others on Capitol Hill, including Rep. Bill Cassidy and Rep. John Fleming.

The nine-page report winds its way through the process by which the moratorium report was written, but the takeaway is that Interior wrote it and then sent it to the White House, where Browner and her staff did some creative editing – most notably, pulling the second paragraph above from elsewhere and putting it into the Executive Summary to falsely indicate that the recommendations had been signed off on by the NAE experts. The fact that the final draft of the report was sent back to Interior for release at 3 a.m. on May 27 indicates a hurried, sloppy and somewhat sinister process at work.

Browner, it’s been rumored, stood in the way of two separate requests by Interior Secretary Ken Salazar to lift the moratorium before it was officially lifted in October. When she headed the Environmental Protection Agency during the Clinton years, American rig counts reached a modern low of 499 by 1999.

Browner is reported to be the likely choice to ascend to White House Chief of Staff early next year.

Interior is doing what they can to put a happy face on the report, as spokeswoman Kendra Barkoff trotted out an “all is well” statement.

“There was no intent to mislead the public,” Barkoff said in a statement to POLITICO. “The decision to impose a temporary moratorium on deepwater drilling was made by the secretary, following consultation with colleagues including the White House.”

And of course, the White House chimed in as well…

A White House official said the report “only reinforces that there was no wrongdoing,” noting that three experts the IG interviewed and included in the report “agreed that it was a misunderstanding.”

But even if it was just a “misunderstanding,” an artifact of some guileless editorial tweaking that inadvertently put a paragraph ahead of or behind an important qualifier, it was at the very least incompetence.  Why was the staff of energy “adviser” Carol Browner allowed to edit a report issued by the Department of Interior’s blue-ribbon panel in the first place?  Why did no one review those changes at Interior to determine whether the edits were justified, especially since the IG report indicates that the edits took place because the staffer or Browner didn’t think it summarized the findings properly?  Why not just ask the report’s authors to rewrite it themselves?

This, obviously, has generated a great deal of consternation among Louisiana’s Congressional delegation. Cassidy was apoplectic upon reading the IG report yesterday…

“The Inspector General’s finding that the blanket drilling moratorium was driven by politics and not by science is bitter news for families who, because of it, lost their jobs, savings, and way of life. Candidate Obama promised that he would guided by science, not ideology. If that were true, at least 12,000 jobs and 1.8 billion dollars of economic activity would have been saved on the Gulf Coast.”

“This report reveals exactly what I suspected all along – Obama administration officials appear to have deliberately disregarded the Information Quality Act to push their destructive moratorium that has crushed job growth along the Gulf Coast.  I initially requested this investigation on June 16 because I wanted to make sure that the federal government was basing policy decisions that would directly impact so many Louisianians on science – not politics.  Unfortunately, this report reveals the contrary.”

Not much new came out of the IG report, few believe its contention that the editing of the moratorium statement was an intent to mislead and this issue is only heating up given that a month after it was lifted permitting for offshore drilling in both deep and shallow water has proceeded at a glacial pace if at all, with terrible effects to Louisiana’s economy.

When Republicans take over as the majority party in the House in January, this issue certainly will receive a larger hearing. The tenor of the scrutiny applied to offshore drilling will largely depend on who receives the chairmanship of the House Energy and Commerce committee; on Monday, the Washington Examiner wrote a scathing condemnation of one candidate for that committee chairmanship – Fred Upton of Michigan, whose record on energy is atrocious for a Republican.

Interested in more national news? We've got you covered! See More National News
Previous Article Saluting The American Hero
Next Article On Veterans, Washington And The Need For Leadership In Louisiana