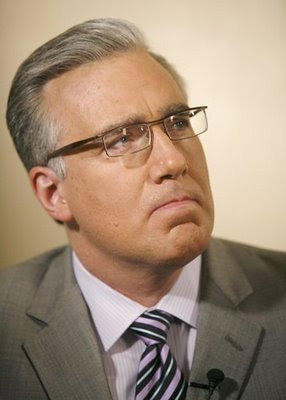 The release from MSNBC:

“MSNBC and Keith Olbermann have ended their contract. The last broadcast of ‘Countdown with Keith Olbermann’ will be this evening. MSNBC thanks Keith for his integral role in MSNBC’s success and we wish him well in his future endeavors.”

This isn’t a huge surprise to us. A few days ago this tip came in an e-mail…

You may not be able to stand any more good news at this point, but here’s some anyway.  As you may know, Comcast is completing its purchase of NBC from General Electric.  The FCC’s fascist chairman, Julius “Seizure” Genachowski, is placing a host of hamstringing conditions for approval, but the deal will be closed soon.

Good friends of the HFR are on the inside of Comcast, who say that the firing of hyper-liberal Jeff Zucker as NBC President/CEO is only the beginning.

What Comcast COO Steve Burke (who will replace Zucker) will do next is fire Keith Olberman, Ed Schultz and Rachel Maddow from MSNBC, realigning it away from the moonbats and towards the right (which Burke will call the “center”).

This realignment will carry through to NBC News and all NBC programming.  It’s not that Burke and other Comcast honchos are Tea Partiers.  They’re businessmen who think allowing liberal ideology to trump the bottom line is asinine.  They also have no intention of allowing Fox to continue eating MSNBC’s lunch.  Ergo, say goodnight, Keith, Ed & Rachel.

This is how Olbermann finished his inglorious career…

Visit msnbc.com for breaking news, world news, and news about the economy