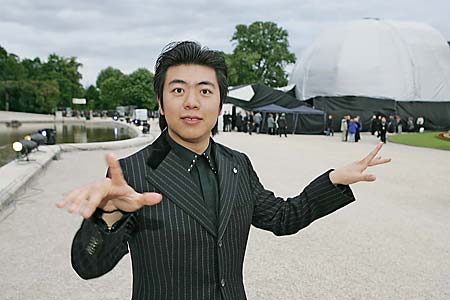 Charles Krauthammer said it about a year and a half ago: Decline is a choice.

And recent events show that our government is choosing decline – on a variety of fronts.

Last week’s state visit by the Chinese president Hu Jintao, complete with the state dinner Barack Obama’s predecessor George W. Bush never would afford the Chicoms, contained a program described as “quintessentially American” including a musical show billed as an “Evening of Jazz.” Part of that program was a performance by Chinese-American pianist Lang Lang – whose choice of music has rightly generated a storm of controversy after the fact.

It seems that Lang Lang – in that “quintessentially American” program, performed a rendition of this song…

The song is called “My Motherland.” Here’s video of Lang Lang playing it…

The movie it comes from, shown in the first clip above, was a Chinese propaganda flick called “Battle on Shangganling Mountain.” It was made in 1956, and it’s about the Korean War – and specifically a battle the Chinese claim to have won.

And at the end of the song, the lyrics include a reference to Americans as “jackals” meeting their fate courtesy of Chinese “hunting rifles.”

Naturally, the Chinese internet is ablaze with pride at the fact Lang Lang got away with embarrassing the American government at its own White House affair.

Both the Sina and Sohu news portals reposted an article that they attributed to the Beijing Evening News, with the headline: “Lang Lang Played ‘My Motherland’ at White House, Flaunting National Power.”

“Those American folks very much enjoyed it and were totally infatuated with the melody!!! The U.S. is truly stupid!!” wrote a user named You’re In My Memory on Sina’s micro-blogging site. This particular post was re-posted many times.

Lang Lang says the song choice was his call, though it’s up to the reader whether to believe him.

He then said, “I thought to play ‘My Motherland’ because I think playing the tune at the White House banquet can help us, as Chinese people, feel extremely proud of ourselves and express our feelings through the song. I think it’s especially good. Also, I like the tune in and of itself, every time I hear it I feel extremely moved.”

“Playing this song praising China to heads of state from around the world seems to tell them that our China is formidable, that our Chinese people are united; I feel deeply honored and proud.”

But while the pianist is celebrating his formidable people, Americans are questioning how a song celebrating our purported defeat in battle and referring to us as “jackals” could have passed muster with the White House event planners – who knew of Lang Lang’s musical itinerary beforehand.

It’s a sensation in China. They can’t believe they were able to insult America at the White House and no one is the wiser.

“My Motherland” having been played at the White House will be seen as a propaganda triumph in China.

“In the eyes of all Chinese, this will not be seen as anything other than a big insult to the U.S.,” says Yang Jingduan, a Chinese psychiatrist now living in Philadelphia who had in China been a doctor in the Chinese military. “It’s like insulting you in your face and you don’t know it, it’s humiliating.”

Yang sees Lang Lang choosing this tune as an expression of the deeply anti-American propaganda that is constant in China.

“This deeply anti-American chauvinism has been fanned by the CCP for years; Lang Lang is expressing the feelings of this generation of angry young people,” Yang said.

A well-known example of such feelings was seen on Sept. 11, 2001, when Chinese chat rooms were filled with young people celebrating this act of terror as an American defeat.

Excited at this coup, patriotic Chinese have been circulating the clip for the last several days. One netizen wrote “the right place, right time, right song!”

We are allowing these people to openly bully us as they build their military, engage in destructive trade policies aimed at driving competitors out of the market, flagrantly steal intellectual property and propagate cyberattacks on American government web sites. And to add to the mix we invite a Chinese-American pianist as part of the entertainment for a state dinner (which, as Donald Trump rightly pointed out was a mistake in the first place; Bush didn’t give the Chinese such an honor because he knew something like this would happen) and he insults us to our faces – with the State Department and the White House staff either not recognizing the insult and the international incident sure to result or standing idle and letting it happen.

And it’s not inevitable.

The housecleaning this ought to bring on should make the party-crasher debacle last year look like a trip to Baskin-Robbins.

As for this Lang Lang, here’s a taste of what he brings to the table. Remember the lip-synching controversy at the Beijing Olympics in 2008? Asked about it by a reporter in Hong Kong, this was his reaction…

It’s fair to describe him as a stooge for the Chicom government. It’s also fair to deduce Lang Lang wasn’t the originator of the idea to play that inflammatory and disrespectful tune in the presence of the American President.