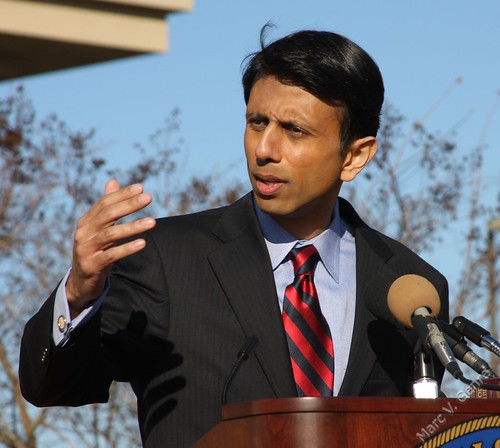 Pollster Verne Kennedy has a survey out this afternoon on behalf of a group of Louisiana businessmen, and the results tend to reinforce a common perception that while Gov. Bobby Jindal might not be meeting with the complete satisfaction of Louisiana’s electorate he’s going to be extremely difficult to unseat in this fall’s elections.

Kennedy’s poll shows Jindal is perilously close to 50 percent unqualified support against a generic opponent – something which should indicate to potential challengers that to beat him will require a perfect campaign with a whole lot of money. It doesn’t appear such a challenger currently exists at present.

The poll, taken Jan. 10-14 with 600 telephone respondents, has Jindal with 49 percent support on a generic ballot. Some 40 percent said they’d vote for someone other than Jindal. Only 11 percent are undecided. Kennedy said the sample for the poll was heavily weighted in the New Orleans area; some 35 percent of the respondents came from the Big Easy. The rest of the state’s markets are represented according to their share of the state’s population, indicating that rural voters are undersampled in the survey.

Measured against the state’s best-known and most ambitious potential challengers from either political party, though, Jindal holds a comfortable lead. In a three-way race with state treasurer John Kennedy and New Orleans mayor Mitch Landrieu, Jindal sits at 51 percent, with Landrieu at 25 percent and Kennedy at 10. Nobody really believes that Kennedy or Landrieu will make the race in any event.

Jindal, of course, sat at $7 million in announced campaign funds at his last reporting period in February of last year. Word of a war chest filled with over $10 million in current balance pervades the grapevine, and the governor has been actively shaking trees from New York to California for the last year – even raising significant sums from New Orleans trial attorneys, a traditional source of Democrat cash, at a high-dollar event last September. To take the governor on, it’s almost a requirement that a challenger be wealthy and self-finance; insiders to the statewide political scene say there just isn’t the money available to make up the distance.

What’s more, the poll says Jindal’s vulnerability, to the extent he has any, seems to be on the right – at least to the extent that Kennedy’s release lays out a scenario whereby the entry of a wild card from the Tea Party could create a potential/imperfect 1991 scenario (with Jindal in the role of Gov. Buddy Roemer, who came in third behind David Duke and Edwin Edwards)…

Although not tested in the survey, the Tea Party which did well in 2010 Congressional Elections could become a factor if Jindal were opposed by a popular and well funded Democrat.  A Tea Party candidate would pull much more from Jindal’s Republican base than from a Democrat potentially putting the Governor in a Run-Off Election.

In a runoff, of course, Jindal would likely easily beat a Democrat.

Nevertheless, the implication of the Kennedy poll for Jindal, if there is much to take from it, is that he should tack hard to the right – principally on fiscal issues.

John Kennedy, no relation to the pollster, has proposed a sixteen point plan that is attracting some interest.  Although only 23% have heard about Kennedy’s plan, 64% of those who are familiar with it say it makes them more likely that they would favor Kennedy for Governor if he became a candidate.

Jindal’s administration has taken something of a dim view of many of the treasurer’s proposals as unworkable and unlikely to produce the advertised savings. But the political lesson for the governor, reinforced by the poll, is that voters are looking for more drastic reductions in the size and scope of state government than Jindal has thus far brought to the table. The poll was conducted prior to Jindal’s proposed merger between the University of New Orleans and Southern University at New Orleans, a structural change in state government which would fit just such a transformative agenda.