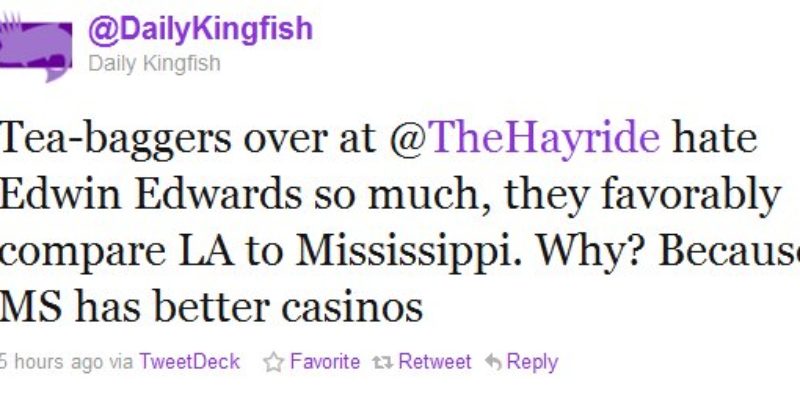 Some people like Twitter, see. We nutria don’t. You can’t really convey the experience of being a long-tailed invasive species persecuted by the very people who introduced you into your environment in only 140 characters…

Naw, that ain’t it. I just think it’s like mental snacks for schmucks.

But here’s the thing – there’s a lot of stuff on Twitter. And my cousin T-Flip showed me something hilarious just now.

It seems when Scott tore up Edwin Edwards today on the day they let him out of the funhouse, he mentioned some site called The Daily Suckerfish was talking about Fast Eddie running for governor again. Personally I think that’d be a dandy idea; we nutria were quite well represented in his last administration. Shoot, my uncle T-Bar was the second man for the alcohol and cigarette commissioner for a while – at least until he got loaded and burned up his couch dropping his cigarette after passing out. They did one of those quiet resignations after that. But anyway, he was a big wheel.

It doesn’t appear that the idea to bring Edwin back is all that popular, though, so I’m OK if we let it drop. The Suckerfish people were a little more insistent about it. They actually went and looked up the law and found out that come 2026 they can put him up for Govnah again. At that point he’s probably gonna be running against Bobby Jindal’s kid – y’know, the one who came suddenly and got born at home? – or maybe Bananas Foster Campbell.

Anyway, Scott was kinda mean and he called ’em clowns for that. And they didn’t like it, even though they probably got more traffic today than they have since Stormy Daniels was running for the Senate. Which is where Twitter comes in.

It was pretty funny when T-Flip pulled out his Droid and showed me that while we were lunching on some Cattails a la BP. We got a good laugh about it. Cuz first, when you want to take a shot at somebody and you only have 140 characters to do it with, totally blowing the setup of the punch line drains the fizz out of the Barq’s, if you get my meaning.

This is what they were griping about…

Ask yourself why it is that Mississippi has Las Vegas-quality casinos which bring folks in from all over the country and we’ve got a bunch of glorified truck stops which drain poor people’s Social Security and welfare checks. How much damage do you think came from Edwards’ casino-license scheme? How many good jobs were lost? How much capital investment did that drive away?

That kinda sounds like favorably comparing Mississippi to Louisiana instead of the other way around, no?

And look, I’m a nutria, so I’m not hifalutin. You can drop me off at Boomtown and Imma be more than happy to throw craps with the little people. They got Kentucky Beau and Popov free for the askin’, too. And I like that common touch. But that said, it’s like this – on Saturday Boomtown has Morris Day and the Time playin’, and the Hard Rock in Biloxi has .38 Special puttin’ on a show.

Now, I can do the Bird better than any rodent this side of Sean Penn. But if you ain’t got .38 Special, you ain’t got spit. That’s casino music, baby.

In other words, Mississippi DOES have better casinos that Louisiana, at least generally speaking. I didn’t think that was all that much in doubt. When was the last time they loaded up a bus of people from Pass Christian and brought ’em to the Belle of Baton Rouge?

And I was just a cute lil’ grass rat back then, but isn’t all this why Edwin had to go bye-bye? Seems like he had a jury who didn’t think much of how he set the casinos up. What was amazing is how he managed to finagle it so his Number One Guy got to decide who got to put up blackjack tables and who didn’t in the first place; the scheme was so stupid you’d think somebody woulda said something. Like “Ummm, why aren’t we doing this the way the dumb rednecks next door are doing it?”

That didn’t happen, and now everybody gripes about how most of the casinos around here come off like Teddy KGB’s place, minus the Oreos. Obviously, something went wrong.

Point is, I don’t know who these Suckerfish people are. I don’t think they know how to run smack talk, though. And I’m thinking they’re not great gamblers, either. Probably the same people who hit 18’s sitting at third base.

Try that at Boomtown, and you’re lucky to get out of there without a shiv in your kidney. The rest of the customers will definitely not allow you another Kentucky Beau and Pepsi Max. My aunt T-Flo found that out the hard way. She only plays Pai Gow now.

And she does it at the Imperial Palace.

Interested in more news from Louisiana? We've got you covered! See More Louisiana News
Previous Article The Zipper Is Out
Next Article This Ain’t Nothin’ But The Man Tryin’ To Keep A Brotha Down