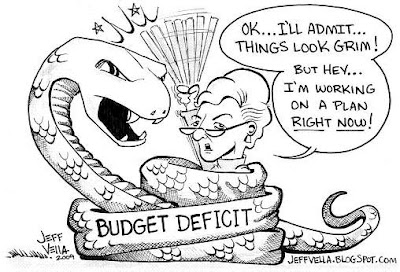 For decades, through numerous Congresses and presidential administrations led by both parties, budget deficits have expanded and the federal debt has soared. (If you would like a jolt of reality, you can go to http://www.usdebtclock.org/ and watch the hands of the clocks turn feverishly.) In a few weeks, our federal government will once again bump up against the federal debt limit, currently at $14.3 trillion. The debt is expanding so rapidly (view the clocks) because we are borrowing 37 cents of every dollar the federal government spends. This fiscal madness must stop.

Congress did not pass a budget last year. Government is being funded by a “continuing resolution” that simply continues current spending levels for a specified period of time. President Obama recently released his executive budget for the next fiscal year. To say that it falls short of addressing the debt explosion would be a gross understatement. Obama touts the fact that his budget calls for a “painful” reduction of $400 billion in discretionary non-defense spending during the next decade. What he fails to point out is that those “cuts” are to programs whose funding exploded by 24 percent since he took his oath of office. The Republicans in Congress want to return to 2008 levels of spending—the level present before Obama and the Democrats previously in the Congressional majority increased federal spending by $3 trillion. The president says he will veto any such appropriations bill coming to his desk.

The good news—if anything having to do with this cumulative failure of fiscal leadership can be considered good news—is that there is actually going to be a fight over the unsustainable levels of federal spending and debt. For too long, Congress and presidents have simply kicked the can down the road. Republicans feel that the November 2 elections were a clear signal from taxpayers that enough is enough when it comes to debt and deficit spending. Most—but not all—of the Democrats (including the president) want to make only cosmetic reductions in spending.

The budget battle doesn’t have to be a zero sum game. There is definitely room for both sides to do something that is long overdue: develop a reasonable path forward that maintains critical services but puts the federal government squarely on the path to deficit reduction. But to do that, each side would have to put its political poison arrows back in its quiver.

The unbearable debt burden and runaway spending are not going to be controlled without a bipartisan agreement in two areas: entitlement spending and tax reform. Even modest proposals to reform Social Security, Medicare, and Medicaid would significantly lessen (see the clocks) the untenable fiscal burden the federal government is facing. Enlightened tax reform based upon the principle of reducing loopholes and lowering rates could increase federal revenues NOT by increasing tax rates but by spurring economic growth that would also grow government revenues.

To accomplish that noble purpose, our elected officials have to stop playing their childish game of “Gotcha!” Unfortunately, President Obama’s budget was simply another manifestation of that game. He refused to make any hard choices and just passed the buck to the Republicans and a handful of Democrats who clearly see a fire in the theater.

The taxpayers are tired of posturing by elected officials. They spoke loud and clear last November 2 that they want the fiscal problems addressed. The time to do it is now. The game is, indeed, on and there can be no rain delays or forfeits in this contest. Our nation deserves action and answers.