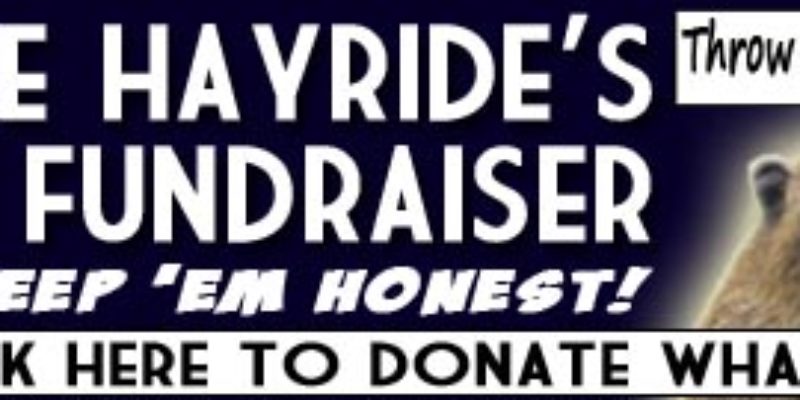 Usually I leave it to Oscar to handle our fundraising efforts during the few periods of the year when we conduct them, but I thought I’d weigh in this time in support of The Hayride’s spring drive which is continuing for the next couple of weeks.

To those of you who’ve made donations to us so far during this drive, our sincere appreciation. We’re honored to have such a generous and committed readership here on the site.

But to those of you who haven’t yet done so, I’d like to plant a bug in your ear if I can.

As Oscar says often, The Hayride isn’t a subscription-based site. We don’t charge for content, and we have no interest in ever doing so. Putting our posts behind a pay wall in this day and age comes off as insanity, and fewer and fewer publications on the web are traveling on that road.

We’re traffic-based, and advertising-based. And we’re growing to the point where at some point in the future we might not even need to supplement ad revenues with donations. But this site is still a baby, relatively speaking; it’s only 16 months old. We’ve managed to put ourselves in position to at least be arguably the top political site in Louisiana, but we’re not quite at the point where we’re running. It’s more like a wobbly straggle.

How much hand-holding you’d like to be involved in is entirely up to you. But we’ve got some incentives set up for specific donation amounts.

If you saw Oscar’s post earlier this month about the spring fundraiser, you already know that for $50 and $100 donations, we’re giving away copies of Brent Barksdale’s Little Book of Louisiana Political Quotes. The Volume 2 version, which is newer, goes to $50 donors and both volumes go to $100 donors.

But we’ve got another prize, courtesy of our friends at The Retreat Salon and Day Spa on Bluebonnet Boulevard in Baton Rouge. A $75 donation will net you a $25 gift certificate to The Retreat – the use of which is a perfect way for our female readers to relax and come out looking great, and also for our male readers to earn valuable brownie points good for watching the Final Four or getting out of weeding the garden.

For $125, of course, donors get the whole enchilada.

By donating, you’ll be helping to keep the site growing. We’re working on a few projects to increase the Hayride’s interactivity that we think you’ll love, and we’re bringing on some additional contributors in advance of the upcoming regular session of the Legislature. More voices equals more interesting content, which leads to a better site and a great investment for our donors. But those additions will come at some cost, so our current ad revenues will need a little goosing in the short term.

Like I said, we’re not going to charge subscriptions and we’re also not going to browbeat our readers for donations all the time. You come here to read about politics, not to find out how to give us money – and I respect that. But if you’d like to reel in some great swag and help us build the Hayride, please feel free to either click this image and donate through PayPal…

…or if you’d rather send us a check that’s fine to. Use this address…

Thanks in advance for any donations you’d like to make. And thanks for visiting the site!

Interested in more national news? We've got you covered! See More National News
Previous Article Quote Of The Day, March 28, 2011
Next Article Is Facebook About To Hire Robert Gibbs?