Bill Osmulski, a reporter with the MacIver Institute, which is a free-market think tank in Wisconsin, was outside the state capitol in Madison after Republican legislators exercised a nuclear option and separated the controversial budget-repair bill into components which could be passed without a 20-vote quorum in the Senate, effectively ending a 19-day standoff with runaway Democrat senators by passing the revised bill on an 18-1 vote.

Osmulski was “made” by members of the crowd protesting the Republican actions, and unpleasantness ensued until someone opened the doors to the Capitol and allowed the protestors to rush in…

The coup de grace delivered by the GOP senators tonight came as a result of a breakdown in negotiations between Republican governor Scott Walker and GOP Senate majority leader Scott Fitzgerald and Democrat Senate minority leader Mark Miller this week. Miller’s role in those negotiations led to both Walker and Fitzgerald denouncing him in especially strong terms for what they saw as intransigence and dishonesty.

A letter Democrat Senate Minority Leader Mark Miller sent the governor today, indicating Miller’s unwillingness to further negotiate any details of the bill, was what prompted the GOP’s decision to take the bill to the floor.

“It was like, ‘I’m in the minority, and I’m going to dictate to you what your options are,’” said one GOP source about Miller’s letter. It was just three days ago that Miller had sent Fitzgerald a letter urging more negotiations, despite the fact that Governor Walker had been negotiating with at least two Democrat senators for nearly a week. “With his recent letter, it became clear that all he wanted to do was stall,” said the GOP source.

Another action that provoked the GOP senators to act was Democrat Senator Lena Taylor’s very public decision to have a spring election absentee ballot sent to her in Illinois. The spring election is scheduled for April 5th, which indicated Taylor’s desire to stay out of the state for another month. “That sure didn’t help,” said one GOP source.

Schneider also reports that part of the reason Walker and Fitzgerald held off on splitting the bill out from its fiscal components and passing the collective bargaining limitations was the rather hairy question of precisely what parts of the bill were fiscal and what were not. But after consultations with the Legislative Fiscal Bureau, that question was resolved – to Miller’s surprise.

GOP senators consulted with the Legislative Fiscal Bureau on this point, and were sent a memo indicating that while there were some “fiscal” provisions of the bill, these provisions didn’t technically make an “appropriation,” and therefore were not subject to the three-fifth quorum requirement. This allowed senators to keep the bill virtually intact, which the GOP felt helped bolster their argument that all the collective bargaining changes were, in fact, fiscal in nature.

What is perhaps most stunning is that Fitzgerald’s maneuver tonight seems to have caught the Democrat Minority Leader completely off guard. Senators Miller and Fitzgerald have access to the same legislative attorneys and were likely given the same options for resolution.  “I think [Miller] actually thought he was going to win,” said one GOP source.

It appears the move also caught the union protestors at the Capitol off-guard as well to an extent, but when the legislators closed up shop and attempted to leave the capitol via an underground tunnel to a government building across the street and from there by bus to where they’d parked their cars, the bus was mobbed by a group of protestors and rocked back and forth.

A little video as the Senators left the chamber… 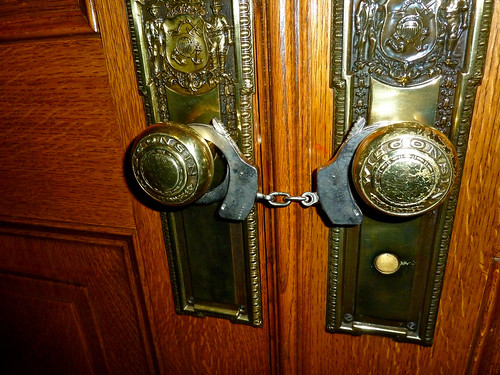 It also appears that when the protestors made it into the building they intended to set it up so they couldn’t be dislodged – or so the legislators couldn’t get back in to vote on anything else. By law, though, the legislators don’t have to do their business at the Capitol – so long as there is notice of a location for them to meet they can do so anywhere.

When protestors took over the capitol earlier in this three-week saga they did $7.5 million in damage, and it’s quite possible they’ll do something similar this time. Word has it protestors are “arriving en masse” with sleeping bags in tow.

Ultimately, this episode is going to result in a complete victory for Walker and the Republicans. Walker is getting everything he was looking for in this legislation, and while the governor’s polls have gone south as a result of the three-week media ordeal he’s also managed to move the issue of public employee union compensation into the nation’s eye and provoke a major discussion with applications nationally.

Further, what Walker has done has moved the Overton Window and created an environment for Republican politicians to alter the unsustainable government-spending status quo. Its effects have already surfaced in the fight in Ohio, which is shaping up to be just as nasty with stakes just as high.

And while his poll numbers have taken a huge hit over the course of the three weeks, by his passing his legislative agenda they’re going to improve – unless the effect on individual Wisconsans is negative. And it’s difficult to see how the average taxpayer in that state will have a problem if Walker balances the budget without raising taxes, cutting services or laying off state employees. Polls which say it’s wrong to restrict rights, even if they involve collective bargaining for teachers, also say the opposite if the questions are asked in different fashions. Ultimately, though, the average taxpayer doesn’t particularly care if state workers can’t engage in collective bargaining – and if Walker’s program works as designed and the unions no longer get to have the state collect dues for them, for example, at the end of the day it’s likely he’ll end up smelling like a rose.

You could make an equivocation between this case and the Obamacare fight if you want, but ultimately the reason the comparison doesn’t work is that Wisconsin is moving toward a de-unionized public sector model which has proven to be more amenable to responsible state budgeting, while in the case of Obamacare it’s already becoming quite clear that the waivers, double-counting of revenues, hidden slush funds and constitutional questions make that law an unworkable mess before it’s even really begun to be implemented.

And that’s why Walker shouldn’t sweat the polls. If what he’s doing won’t accomplish its stated purpose – in other words, if it doesn’t turn out to be good public policy – then he doesn’t deserve re-election in three years anyway. But if it does, maybe he’s reprising the cram-through tactics the president and his Democrat minions in Congress used on Obamacare, and what it will turn out to prove is that conservative solutions work and what’s required is for conservative politicians to have the stones to actually pursue them.

in the meantime, though, there is a circus going on in Madison. And for the next few days the Wisconsin capitol will be even more chaotic than it’s been before. Walker has penned an explanation for his actions in the Wall Street Journal tomorrow, pointing out some of the more onerous circumstances of life in the Badger State his package will overturn. That will surely be met with a cavalcade of horror stories from public employees, and the public will get a chance to see both sides. Ultimately, though, what might decide public opinion and build a consensus on the public employee union question is the behavior of the protestors at that capitol and what happens when members of the Assembly return tomorrow in an effort to vote on final passage of the bill.