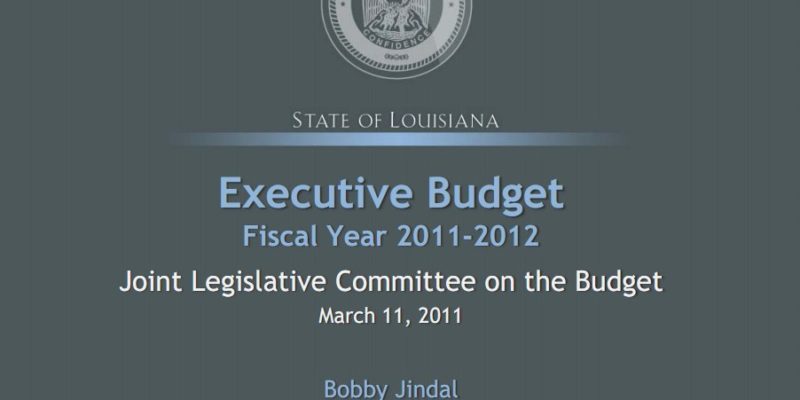 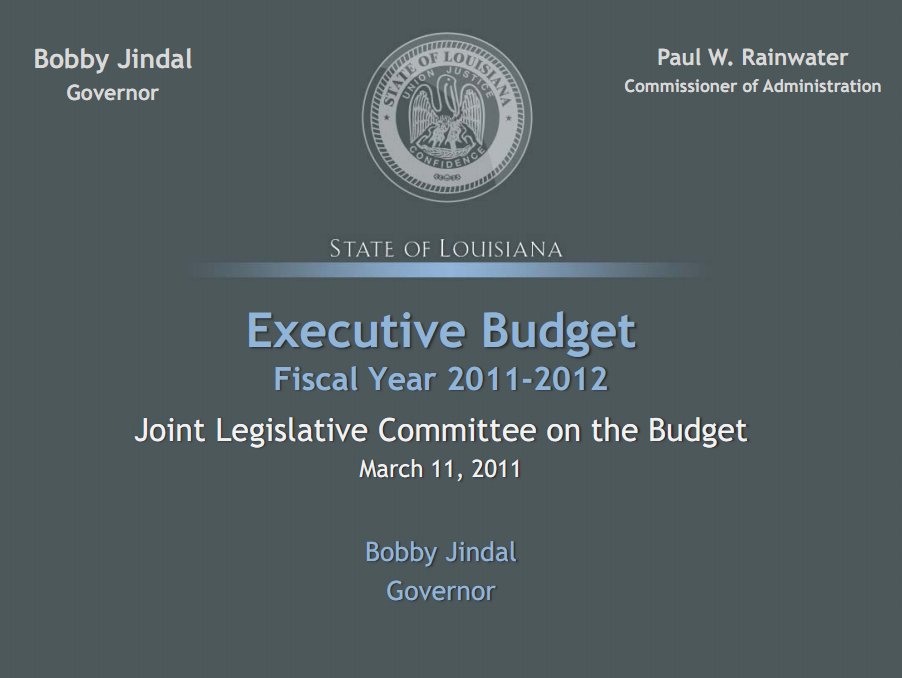 It doesn’t eliminate all of the structural problem with the size of state government, and because of that fact Louisiana Gov. Bobby Jindal can’t get a gold star for his efforts at crafting a balanced budget. But in keeping with the governor’s gradualist style in transforming the way the state does business Jindal’s 2012 plan does move the ball forward.

Call it a first down, but not a touchdown.

Jindal’s decision to solve a $1.6 billion deficit by using $1 billion in spending cuts, mostly through reorganization of various state agencies, and $600 million in one-time revenue sources has been criticized both on the right and the left. Friday, Jeff Crouere blasted Jindal for continuing “to have too many employees per capita, too many colleges and universities, too many boards of higher education, and too many charity hospitals. Our real problem is that we have a big government mentality that has gripped our state since the days of Huey Long.”

And on the same day, Democrat state rep. Karen Carter Peterson offered up the typical line from the Left:

“There’s a blanket statement that we won’t impose additional burdens on corporations or even individuals. That’s prohibited,” Peterson said sarcastically.

Both critics are right, and both are wrong. Jindal’s budget is neither perfect nor terrible. It neither fully balances the budget nor does so on the backs of anyone in particular.

In the budget are 4,000 position reductions in state government, a number which ultimately should increase. Louisiana has too many state government employees compared to other Southern states; even Democrats recognize that fact. And Jindal could have done a better job of structuring his budget toward reducing more positions; in doing so he would have improved the long-term picture for future budgets by making the footprint of state government smaller.

But if you’re going to cut 4,000 positions, it’s a feature, rather than a bug, if you can eliminate 2,000 which are currently unfilled as Jindal has done. Crouere lambasted that fact – something which doesn’t make a great deal of sense. If the number of state employees needs to be reduced, it’s a good idea to start with position cuts that don’t actually put anyone out of a job.

Meanwhile, state Rep. Damon Baldone hammered Jindal for using one-time money to plug a structural budget hole, and also for cuts in health care. “It’s just a horrible business decision the governor is making,” he was quoted as saying by the Baton Rouge Advocate.

That’s entertaining. Baldone voted last year to use $2.8 billion in one-time revenue to plug last year’s budget hole, so he struggles with credibility in criticizing Jindal for using $600 million this year. And on health care, Baldone neglects to mention that while Louisiana places 49th in public health care outcomes despite placing 6th in public health care dollars spent per capita. He can’t possibly believe such incongruity will persist in the face of a large deficit, so his statements appear partisan at best and demagoguery at worst.

“I’m pleased Gov. Jindal’s proposed budget is built largely on cutting costs, but have some concerns about a proposed 3 percent increase in employee retirement contributions. As Retirement Committee Chair, I’m going to work with the Administration in coming weeks to develop an alternative that won’t affect lower-income state employees as much.”

Jindal is also criticized for advocating the sale of three prisons the state currently owns. State sen. Eric LaFleur (D-Ville Platte) says it’s a waste of taxpayer money to do so, though his statement assumes the private companies buying the prisons won’t run them efficiently enough to do the job cheaper.

“If a private entity takes over you have to have a profit or they won’t buy. That profit helps provide you better pay, better benefits. Profits come out of that,” LaFleur said.

LaFleur made that statement on the steps of the Capitol, addressing a crowd of 150 protestors largely made up of prison employees and their families. The mentality behind the statement, of course, is classic Big Government leftism – profits are a bad thing, because a company trying to make a profit will attempt to do so on the backs of its employees, while a government-run entity will be fairer to those employees.

LaFleur said he doesn’t know of an economic impact study on the sale of the prisons, which suggests he has no evidence to support the case that paying private companies to house prisoners will be more expensive than the state doing it in the cases at hand.

Other gripes against Jindal’s budget are more substantial. The Governor is taking a risk of some size by depending on a constitutional amendment redistributing money to fund the TOPS program, without the passage of which by the voters will leave TOPS short some $92 million. One imagines he’ll get that passed; if not, an opportunity to reform TOPS to make it less of an entitlement and more of a merit-based reward program aimed at keeping the state’s best high school graduates from leaving to go to college elsewhere will have been missed. But some of the TOPS critics run off the rails by calling proposed tuition increases at the state’s colleges an effective tax increase. That seems a distortion of the definition of a tax; a tuition increase is an increase in prices for services consumers choose to use, while a tax by definition is imposed on a wider swath of the population. And given the incredibly low tuition rates charged at Louisiana public colleges compared to the Southern and national averages, it’s difficult to imagine tuition increases wouldn’t have eventually followed when budget deficits struck.

Further, it’s been noted by critics on both sides of the aisle that Louisiana needs to move more students into its community and technical colleges so as to improve graduation rates and save money; a rise in tuition is a good way to do that since students with less academic credentials and limited financial means should be pursuing job skills first before attempting college degrees; that’s common sense. If more students go that route, the state’s woeful 38 percent six-year graduation rate among public colleges will improve – and with it the outcomes of the higher education system as a whole and the fiscal outlays it requires from the general fund.

The budget did meet with the approval of state Sen. Jack Donahue (R-Slidell), who chaired the state’s Streamlining Commission last year and whose statements on the budget have emphasized downsizing government while protecting education and health care.

“I think the governor’s proposed budget is responsible in light of the anticipated shortfall,” Donahue said. “As presented, it goes a long way towards protecting education and healthcare, while eliminating state positions in keeping with legislation we passed last year.”

“As we move forward, we will find things that aren’t apparent on the surface,” Donahue said. “Today’s presentation did not contain sufficient detail for us to fully understand how the pieces all fit together, and was not entirely clear on some of the proposed budget cuts.

“Nonetheless, this is a substantial first effort and I look forward to delving into it more deeply.”

There are complaints to be made about the budget, and it will certainly change as it dives into the legislative pool next month. But cuts in the health care system, for example, or increases in the contributions by state employees to health and pension plans are modest by comparison to what is happening elsewhere. Most of the items included in the budget are neither surprises nor particularly ideological. The legislators who are quibbling about what the governor has proposed are now under the gun to improve it – with the knowledge that Jindal has not produced nor will support tax increases to fill the gap between revenues and expenses.