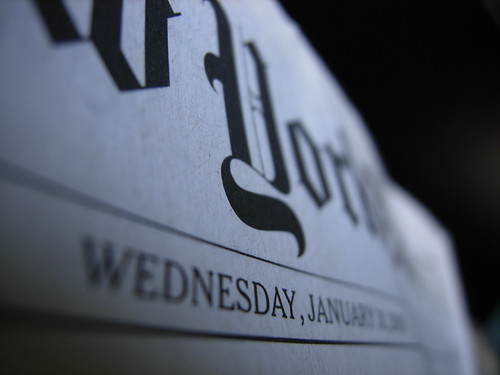 At least that’s the lesson one could draw from a hit piece on Louisiana Gov. Bobby Jindal which appeared in the New York Times today. The story, written by Eric Lipton, assails the Supriya Jindal Foundation for Louisiana’s Children, a private charity set up by the First Lady to aid math and science education in Louisiana by identifying several companies which have contributed to its million-dollar funding.

The Foundation’s principal activity is to install high-tech whiteboards in Louisiana classrooms, a system which connects a teacher’s laptop computer with a big interactive screen that hangs on the classroom wall, and it also comes with handheld devices for students to use at their desks. Here’s a video from the company making these things to give you an example of how they work…

The First Lady has handed over about 170 of these systems in schools around the state so far. It’s hoped, she says, that kids in the classrooms her foundation can benefit will develop some aptitude and passion for math and science as a result of being exposed to technology, and it’s hard to argue that a state highly dependent on industries involving lots of engineering like Louisiana is needs a lot better performance out of its educational system in developing those skills. Supriya Jindal is, in fact, a trained chemical engineer. It’s not like her interest in getting math and science education a broader circulation comes out of thin air.

But that’s not what Lipton’s piece leads with. In fact, Lipton has not a single quote from a teacher, parent or student the First Lady’s program has affected.

Instead, right off the bat his article insinuates that the Jindal Foundation is a front for the governor’s re-election campaign, and that companies are buying influence by donating to it.

AT&T, which needed Mr. Jindal, a Republican, to sign off on legislation allowing the company to sell cable television services without having to negotiate with individual parishes, has pledged at least $250,000 to the Supriya Jindal Foundation for Louisiana’s Children.

Marathon Oil, which last year won approval from the Jindal administration to increase the amount of oil it can refine at its Louisiana plant, also committed to a $250,000 donation. And the military contractor Northrop Grumman, which got state officials to help set up an airplane maintenance facility at a former Air Force base, promised $10,000 to the charity.

Lipton doesn’t directly allege a quid pro quo relationship between these three companies and the Jindal Foundation, but you’d have to be an idiot not to assume that’s what he’s saying.

You’d also have to be an idiot to agree with his conclusions.

No, the Governor wouldn’t want any of those things to happen on their own merits. He’s doing them out of a shakedown for his wife’s charity – which gives away high-tech equipment to public schools.

Then Lipton digs up someone named Anne Rolfes, who runs something called the Louisiana Bucket Brigade. Her contribution to the discussion is this…

“It may be a good cause, but it creates the appearance he is being bribed,” Ms. Rolfes said. “And if you are truly committed to ethical behavior, you just need to stay away from it all together.”

So in other words, Jindal’s ethics require him to have no positive interaction from business people – even if that means the kids get stuck with early 20th-century technology in the classroom as a result. What a humanitarian this woman is!

The Louisiana Bucket Brigade, by the way, is an obscure environmentalist group which primarily supplies the neighbors of refineries and chemical plants with devices to collect air samples so as to document air pollution. Its motto is “Clean Air. Justice. Sustainability.”

And ignorance, too, as it turns out.

Considering that the Jindal Foundation is installing the whiteboards in largely low-income, predominantly minority schools, one could explore, if one chooses to, whether the real story here isn’t that the Bucket Brigades are trying to keep Louisiana’s African-American children poor by opposing the improvement of their schools by a private charity and assailing the major employers in many of the communities where they live.

But that’s another story, one which Lipton most certainly will not be writing soon.

While the charity is named and led by Mrs. Jindal, the governor has not entirely distanced himself: a photo of him alongside his wife is on a corporate solicitation page on the foundation Web site, and his chief fund-raiser is listed as the charity’s treasurer on its most recent tax return. A state employee from the governor’s office who is an aide to Mrs. Jindal is listed as the contact for the foundation’s books.

Sounds like a smoking gun, doesn’t it? The governor appears with his wife in a photograph! We certainly can’t have such impropriety among our public officials, particularly when they’re attempting to raise money for charity.

“It is a completely nonpolitical, nonpartisan organization created by the first lady, who as an engineer and the mother of three children, has a passion for helping our young people learn science and math,” said Kyle Plotkin, the press secretary. “Anything other than this reality has plainly been dreamed up by partisan hacks living in a fantasy land.”

But then it’s back to the innuendo farm…

Dow Chemical, which has pledged $100,000 to the foundation, is the largest petrochemical company in Louisiana and has had numerous interactions with state officials during the Jindal administration, including an investigation into a July 2009 spill at its St. Charles Parish plant that forced the evacuation of area homes. The state in December 2009 proposed fining the company and its Union Carbide subsidiary for allowing the release of a toxic pollutant and failing to quickly notify state authorities of the leak, but so far no fine has been assessed.

Alon USA, an Israeli oil company that has pledged $250,000 to the Jindal Foundation, last year sought permit changes that would allow it to discharge more pollutants at its Krotz Springs refinery. In 2009, state environmental officials also eased requirements for the company to check for spills of oil, ammonia or other contaminants in waterways to twice a month, instead of twice a week, records show.

Hey, a chemical plant and an oil refinery are donating money! No interest in math and science there. Clearly they’re trying to buy influence; that Dow hasn’t been hit with fines yet off that spill – which is anything but unusual, either in Louisiana or anywhere else – and that Alon is trying to get a regulatory break certainly prove they’re in cahoots with Jindal.

We’re up to five companies being smeared by this piece now. Lipton then tosses in a quote from Alon’s CEO…

Jeff Morris, Alon USA’s president, said his company expected no special favors in return for its contributions to the Jindal Foundation or other charities. “I can understand how people might be concerned, when you have a congressman or others who have their own charities,” he said. “But that is not the case here. It is apparent that the children of Louisiana have been blessed by Supriya’s involvement.”

Wouldn’t you love to hear the question which prompted that response? One can only imagine.

And again – when Morris says it’s apparent the First Lady is helping the state’s kids, it’s a perfect invitation for Lipton to show us a quote from a teacher, a parent or a student who’s been affected by the installation of the whiteboards. Do they work? Are they a waste of time and money? Have they made a difference?

Nope. Instead we get this…

Several of the charity’s major donors are large state contractors, like Acadian Ambulance, or D&J Construction, which alone has received $67.6 million in contracts since 2009, mostly for highways, said a separate report on the foundation being issued this week by Citizens for Responsibility and Ethics in Washington. Both companies have pledged at least $10,000 to the foundation.

Ethics watchdog groups say the contributions are no accident.

“The motives might be good,” said Melanie Sloan, director of Citizens for Responsibility and Ethics, which has also examined public records detailing the operations of Mrs. Jindal’s charity. “But the donations that come in to charities like this are almost always from folks who want something from a politician. It is a troubling phenomenon.”

CREW’s partisan bent is fairly well-known, as is its funding from George Soros. Lipton doesn’t mention that. Wonder why.

And then he finishes with this…

“Foundations tied to politicians see their donations dry up when the politician is no longer in power,” Ms. Sloan said. “That demonstrates the real reason the charities get the donations is their political position, not because of the good works they do.”

In other words, Sloan slurs Louisiana’s First Lady with a broad generalization and an insinuation that she’ll be out of the charity business when her husband’s political career is over. Good thing he’s in his first term as Louisiana’s governor and running for re-election, then.

Lipton offers not one single example tying contributions to the First Lady’s foundation with favorable acts by the governor. Not one. It’s pure innuendo and some general pontifications by left-wing loudmouths. And the editors at what is supposedly America’s newspaper of record unsurprisingly actually ran this piece.

This would be one of the most scandalous examples of slanted journalism had it come from another newspaper. At the New York Times it’s merely a Thursday. It might be remembered that the Gray Lady owns the newspapers in Houma and Thibodaux, the citizens of which probably don’t quite share the worldview expressed in this piece.

There is ample opportunity to come to Louisiana and offer up examples of political corruption. Lipton might have done the citizens of Louisiana a favor had he actually pursued such a journalistic project. Instead, what he’s done is engage in partisan hackery to a staggering extent and slimed a bunch of people who are giving their time and money in an effort to alleviate lousy performance in Louisiana’s public schools.

It’s a crying shame. And hopefully neither the First Lady nor the corporate partners in her foundation will take the lesson Lipton seems to be trying to offer to them that doing no good would be their ethical responsibility.

Interested in more national news? We've got you covered! See More National News
Previous Article Surprise! After All The Complaining, Turns Out Most Of Jindal’s Fundraising Comes From In-State
Next Article Wisconsin GOP Senators Pass Custody Resolution For Fleebaggers