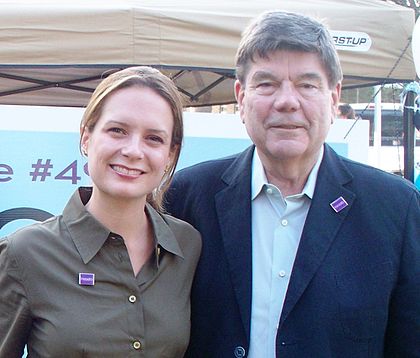 I don’t know who Tommy Woodard is. I do know he’s a guy who lives in Baton Rouge and who has the address of the Louisiana Board of Ethics in his Rolodex. And it looks like he reads the Hayride.

Woodard filed two minor ethics complaints against Fayard earlier this year, one alleging a failure to disclose in-kind contributions to her failed campaign for Lieutenant Governor last year and another noting that Fayard listed an Orleans Parish clerk of court as her campaign chair and a government phone number on her campaign documents as a contact number, in violation of state law.

Those two complaints largely amounted to small potatoes. But today, Woodard struck again – and the most current complaint is of a far more significant nature. It alleges misconduct we have documented at length here at this site; namely, that Fayard and her family conspired with officials of the Louisiana Democrat Party to launder cash essentially from her father Calvin Fayard, Jr. to her campaign through DEMOPAC, the state party’s political action committee, in violation of campaign finance laws.

“This letter shall serve as a formal complaint against Caroline Fayard, The Committee to Elect Caroline Fayard, the Democratic PAC of the Louisiana Democratic State Central Committee (“DEMOPAC”), Cynthia Fayard, Calvin Fayard III, Chalyn Fayard, Calvin Fayard, Jr., Galeforce, LLC and Ski Forever, LLC for their earmarking of donations in violation of La. R>S> 18:1505.2(A)(1),” the complaint reads.

It continues to detail, as we reported in October, November and December of last year, the fact that various members of the Fayard family and companies they control made donations to DEMOPAC in denominations corresponding almost exactly to in-kind donations the party would shortly thereafter make to the Fayard campaign.

Specifically, there was a $210,000 donation from Cynthia Fayard, Calvin Fayard, Jr, Galeforce, LLC and Ski Forever, LLC on October 13 of last year to the state Democrat party, which resulted in a $209,936 media buy the party made on behalf of the Fayard campaign the next day.

And on October 19, Chalyn and Calvin the Third combined to donate $100 to the party, which led to a $100,000 media buy two days later for the campaign. The complaint notes that the campaign knew the media buys were going on, since they reported them as in-kind donations from the party on their campaign finance disclosure reports as required by law.

The complaint notes that these kinds of targeted donations, which appear quite obviously the case in the Fayard saga based on the available data, violate the law…

“No person shall give, furnish or contribute monies, materials, supplies, or make loans to or in support of a candidate or to any political committee through or in the name of another, directly or indirectly.”

And the law provides for rather heavy fines for violators – namely, 110 percent of the contribution in question for those who unknowingly crossed the line, or double the contribution amount in the case of folks who did it on purpose.

Woodard directs the Board to a link of ours from December covering the dirty deeds which our readers can find here. But he continues, citing newspaper reports to the effect that when the story originally broke about the laundry operation on this site in late October, the state party decided to “go dark” about what they were doing.

The complaint notes that state Democrat chair Buddy Leach alleged that DEMOPAC wasn’t required to file 48-hour reports, which was ridiculous if for no other reason than they’d been dutifully filing them right up until the time the money transfers in question were exposed. Ethics Administrator Kathleen Allen publicly disagreed, and DEMOPAC did end up filing a disclosure in December after the election was over, which we noted was replete with even more Fayard family cash moving through DEMOPAC to Caroline’s campaign. Woodard’s complaint doesn’t delve into the donations covered in the December disclosure; at issue in today’s filing are the first batches totalling $310,000 to the party which produced $309,936 in in-kind donations (media buys) to the campaign.

We’ve waited for more than four months for someone to come forward and act on the material we uncovered in that campaign. Mr. Woodard has done so today. Our thanks and congratulations go out to him – along with our best wishes as he pursues accountability for a campaign, a family and a party which have so clearly violated election laws.