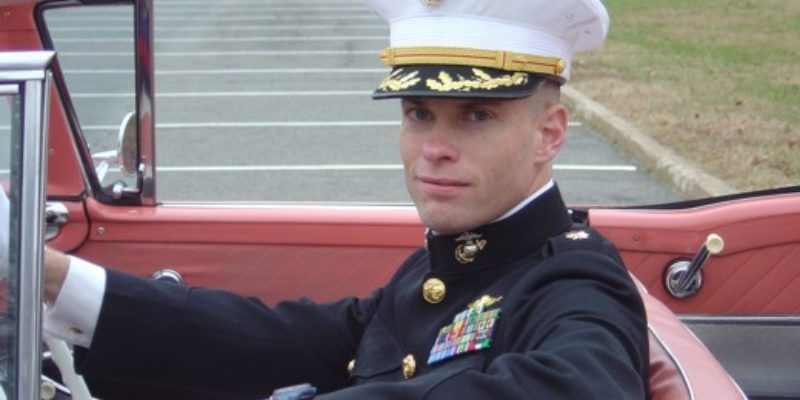 Today is Memorial Day, and this is what it’s all about. I want to share a story with you of one of the greatest Marines I have ever known, Lieutenant Colonel Joseph Trane McCloud.

When I was a young Marine, stationed in Hawaii, I thought I had the world by the tail. As a young Marine, I had had these visions in my head of the great men and women who had come before me. There was one Marine, who, from a leadership capacity became the one man who taught me, more than anything, about what it means to wear the uniform, and the unspoken gentleman’s code that comes with it. That one man in particular, a young Major, whom I respectfully called sir, and nothing less, carried himself in a manner that would have made any veteran proud. Major McCloud, was a Marine Officer who I could turn to for anything professional, and revered personally. He was the consummate gentleman, husband, and father. I looked up to him, and if there was any man whose footsteps I would follow, it would be his.

On the islands I was promoted to the rank of Corporal, joining the field of Non-Commissioned Officers that make up the “backbone of the Corps.” The first line of defense in a pecking order that has made the Marines our nation’s finest fighting force. They say Imitation is the most sincere form of flattery, and I’ll be honest, I admired Major McCloud’s leadership style so much that I honored his impact on my career, by tailoring my approach to that of his. Right down to the way he said, “Oorah.” Major McCloud was the leader who wouldn’t accept failure, because if it couldn’t be done, our leaders wouldn’t have asked for it to be done. If the streets of heaven are guarded by the United States Marines, then by God, we’re going the get it done here on earth! Major McCloud left the islands, and I knew wherever he went he would impact every Marine just the same way he had me.

I transferred to the Pentagon, and after the first week there I realized just how small of a community the Marine Corps really is. I was assigned to an office and in walking through the door I was humbled to see that my direct superior officer was the one and only, Major McCloud. I looked forward to the experience, although I knew he would work me to my limits. That’s okay, that’s what is expected of Marines. He was the toughest boss I’d ever had. He pushed me to the edge, but no matter what, he stood by me, and taught me more about being a leader than I’ll ever imagine.  Major McCloud was there before me every morning, and never left until I did. He never asked anything of me that he couldn’t or wouldn’t do himself. Moreover, he taught me tact. At the Pentagon, I was tasked with speaking to and directing folks with a higher pay-grade than I could achieve if given the next fifteen years. He gave me courage in that capacity, which made me an extremely effective influence, exercising my authority in the utmost professional manner. It’s safe to say, that Major McCloud was an influential person in my life beyond comparison. He was, however, more than just a professional role-model. He was a personal one too.

I remember our first trip to Capitol Hill, for a work-related reason. Major McCloud briefed me as to the name and face of every member of Congress we would encounter, and I’ll never forget him interjecting every chance he got, that we had to have an apple fritter in the cafeteria. He swore by them! After that trip, I swear by them too. I remember Major McCloud sharing stories of his amazing wife Maggie, and their beautiful children. He was such an amazing father, and husband. His devotion and faith gave me encouragement, and showed me that regardless of any adversity, treating a woman like a lady, and being the best father a child could have is the surest way to let your legacy live on.

Major McCloud left the Pentagon, and went back to 3d Marines in Hawaii, would deploy to Iraq, and sadly, die in a helicopter crash. That news brought me and the officers in our corridor to a heartfelt sense of grief. I didn’t let it show too much that I was saddened to the extent I was, but I was hurt deeply. Here was a man that I admired and wanted to emulate, but moreover saw as a brother, and father. The father I felt I missed as a child growing up. I was asked to stand watch over his body at the wake, and I proudly did so. I went home and prepared my uniform, pinning a mourning band around the stripes that signified my newly promoted rank of sergeant, and a tear fell. I lost a friend, I lost a brother, I lost a father. I knew I had to appear strong in front of his wife, and children. They deserved to see a Marine he helped mold, not a weak and weathered soul. I held my composure, after all, Marines don’t cry.

At the funeral I saw Maggie and the kids, she was stoic, brave, a mother of all mothers, a wife who loved her husband, and lady that carried herself with the grandeur of Jackie Kennedy in the wake of her husband’s death. Seeing those kids that morning, clinging to their mother’s side, perhaps not yet realizing that they had truly lost their father, brought me to tears. I tried to hide my tears, but in the funeral procession to Arlington National Cemetery, I had never cried as much. He was given all the dignity that the United States Marine Corps could give one of her fallen. He was posthumously promoted to Lieutenant Colonel, and awarded a Bronze Star; a parade was given, and bagpipes escorted his caisson. We walked behind, and followed our brother to his final resting place. We gave witness to the flag being folded and felt heartache when the sound of gunfire pierced the cold December air, sounding the 21 gun salute. It was something I’ll never forget.

Today, his picture is posted proudly in my house. That picture, the one you see here, accompanied me to Iraq, and will always follow me wherever I go. I feel that although he is gone, his impact on my life remains a constant. I hope that these words will share with you all, the sentiment of what Memorial Day truly means. Afterall, he was, as every fallen serviceman is; a man among men, a father of fathers, a husband that put his wife above all, and truly a Marine’s Marine.

Lieutenant Colonel McCloud has given me more than just freedom, and a life to be truly grateful for. He has taught me compassion, restraint, vigilance, and perseverance. This honored man, to whom those closest know him as Trane, taught me a lesson, and it is this I will share with you. Never, Never, Never give up. When the day is long, and the day is hard, go not into the night regretting at all the work you have done. Even when you get struck down, be it in the matters of life or love, get up, fight the fight, and always hold love for those who gave you a reason to do so. God Bless you Trane. Thank you for your wisdom, and thank you for looking over me, from heaven’s scene, on not only the darkest nights, but most blessed days of my life.

For more on the life and legacy of Lt. Colonel McCloud, please visit the link below