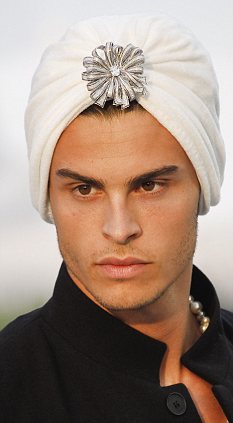 Yes, if you wear this you’re gay.

But this is what passes for a new fashion trend now. Karl Lagerfeld is putting his boyfriends/models in what they’re calling male urban turbans, or murbans.

Somehow I can’t see it catching on, but if Karl Lagerfeld has his way, stylish men the world over will be swapping their trilbies for, er, turbans.

Because at his recent Chanel cruisewear show, Lagerfeld sent his muse, Baptiste Giabiconi, striding down the catwalk in the sort of headgear normally only seen on Sikh men.

Perhaps it shouldn’t have been a surprise. After all, the ‘urban turban’ was touted as the ultimate headgear for women this year.

But given that when most celebrities tried it they just looked like they’d forgotten to take the towel off their head after getting out of the shower, it’s not been widely adopted.

One has to hope the same will be true of the male fashion turban (the murban, perhaps?) because while Baptiste may have looked like an exotic Arabic prince, I have a horrible feeling if Joe Bloggs decided to give it a whirl, it wouldn’t hold the same appeal.

You know that caricature of the British man on the beach with a hanky tied at each corner perched on his head? Yes, that. Which doesn’t exactly scream  ‘style’.

The comments under that Daily Mail article are classic…

But there’s always the douchebag…

As for us fur-bearing rodents in Barataria, we don’t wear turbans. But a coonskin cap is a different animal altogether. My uncle T-Lou has one that looks just like Trump’s do.

But that’s another story.