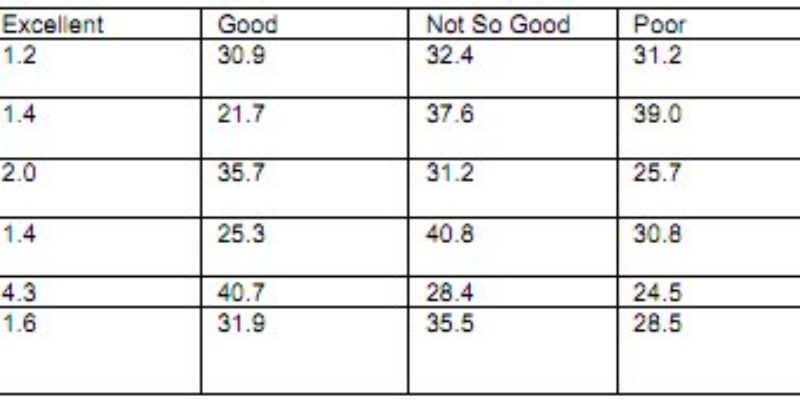 from a press release by Southern Media & Opinion Research, through businessman Lane Grigsby’s website at Laplaintalk.com. Grigsby funded the survey whose results are described below…

Louisiana voters are unhappy with the job state lawmakers are doing, according to the latest survey from Southern Media & Opinion Research Inc.

Developed and conducted by Southern Media & Opinion Research, the survey shows more than half the respondents – nearly 52 percent – said state lawmakers have done a “poor” or “not so good” job in office.

“The governor doesn’t appear to be in any danger of missing reelection this fall, especially without any real challenger so far,” said pollster Bernie Pinsonat. “But his approval ratings are the same as the fall and have actually gone down over the course of his term. That’s significant, considering that Jindal is regarded as a reform governor.”

Pinsonat said that while voters had high expectations of Jindal and the Legislature, the latest poll results show that many voters feel those expectations are not being met.

“Legislators have generally followed the governor’s lead on many issues,” Pinsonat said. “But the poll shows that voters’ impressions of where the state is headed overall hasn’t really changed much.”

SMOR developed and conducted the survey that took place April 19-23 using telephone interviews with 600 randomly selected Louisiana voters on both landlines and cell phones. The overall margin of error is 4.0 percentage points at a 95 percent level of confidence.

Among other poll results:

By comparison, Mike Foster, the state’s last Republican governor before Jindal, was in a much stronger position heading into reelection. In June 1999, Foster enjoyed a positive job-performance rating of 77.4 percent and a negative rating of 18.4 percent. At similar points in their gubernatorial tenures, Foster topped Jindal’s popularity by 22 percent. Jindal’s campaign has been running television ads across the state.

According to the survey results, however, the ads did not improve hispopularity reelection outlook. Respondents who said they are definitely voting to reelect Jindal fell from 39 percent to 35.6 percent. These numbers might be considered anemic, but with more than $10 million in campaign contributions and no opponent in sight, Jindal seems to be cruising to an easy reelection this fall.

Dardenne looks strong heading into fall
Lt. Gov. Jay Dardenne had the biggest increase in popularity from 2010. As Lt. Gov.-elect in November 2010, he had a positive job rating of less than 50 percent. The most recent survey shows his positive job rating is 62.8 percent, with a negative rating of 18 percent. Dardenne is in a very strong position to be reelected this fall.

Caldwell unaffected by party switch
Attorney General Buddy Caldwell’s popularity appears unaffected by his recent switch to the Republican Party. His positive job rating among respondents was 60 percent – unchanged from November when Caldwell was a Democrat.

Donelon also strong headed to elections
Commissioner of Insurance Jim Donelon had positive job ratings from 48.8 percent of respondents. Twenty percent of respondents said they didn’t know enough about him to rate his performance. Barring any controversial insurance issues until the fall elections, Donelon appears in strong position for reelection.

Schedler an unknown commodity
Tom Schedler was elected secretary of state after his former boss, Jay Dardenne, moved on to lieutenant governor. Schedler, however, appears to be an unknown commodity among Louisiana voters. Forty-four percent of survey respondents didn’t know enough about Schedler to rate his job performance.

Schedler is likely to face serious opposition for reelection this fall. Unlike Dardenne, who had a huge base of voters in the Baton Rouge area, Schedler will be forced to devote much of his campaign resources to boosting his name recognition.

About 60 percent of respondents thought legislators acted in their own best interest during the recent special session on congressional redistricting, while 23 percent said lawmakers voted in the best interest of their constituents.

TOPS program remains popular
The TOPS college scholarship program remains very popular. When asked whether the state should continue its commitment to high school graduates who qualify, 85 percent of respondents said yes compared to 12 percent who said say no. Also, 75 percent of respondents did not favor placing limits on state money spent on TOPS compared to 21 percent in favor. Regardless of age, race or gender, TOPS is a very popular government program.

Respondents do not see progress on several issues

The Legislature need look no further in the current survey for answers to why voters believe lawmakers don’t deserve a pay raise or that the current group is no better than past legislatures. None (no progress) is chosen by one third of all respondents, while less than 10 percent said lots of progress has been made.

Respondents saw little or no progress in key area that state government (the Legislature) oversees. Would Gov. Jindal’s popularity be in the mid fifties if most respondents thought lots of progress was made in the areas listed above?

Pay-raise vote could be key in legislative reelection bids
Eighty-six percent of respondents said they were less likely to vote for state legislators who supported giving themselves a pay raise.

One year anniversary of BP oil spill
Two thirds of respondents have an unfavorable opinion of BP. Three fourths of all respondents said they didn’t trust the company to do the right thing when it comes to paying for damages and lost wages. Most wanted the government to hold BP accountable. BP’s ad campaign after the spill didn’t help the company’s image or lead many voters to believe BP can be trusted.

With the number of ongoing federal investigations and prosecutions of Louisiana public officials these numbers should not come as a surprise.