One of the things lefties like to do is to laugh at conservatives who complain about President Obama’s role in the TARP mess. Said lefties point out that TARP was passed and signed during the Bush administration, albeit the tail end of it. As such, they say, folks who don’t like TARP can’t blame Obama for it.

For reasons of principle, of course, the TARP program was worse than obnoxious and reasoned criticisms of it certainly can still be made.

There was the initial TARP which was aimed at bailing out the banks. That TARP was obnoxious to the principle of the free market, although one could make the argument that the real estate implosion which brought on the financial crisis was mostly government-generated (see George Will’s excellent column over the weekend for a succinct discussion of that) it was proper for government to provide indemnification for the crisis. I’m not persuaded by that argument, but it’s a serious argument.

And then there was the TARP which morphed after Obama’s inauguration into a bailout for his union friends.

The first TARP, the one which was actually voted on by Congress, might actually have been a success.

The federal government has reaped a $10 billion profit on bank loans made under the controversial Troubled Asset Relief Program (TARP).

The Treasury Department announced Tuesday that the government had pulled in another $1.7 billion in proceeds stemming from TARP loans.

Bank of Montreal had acquired M&I Bank of Milwaukee and, as part of the deal, paid back the purchased bank’s share of TARP funds.

The reviled bailout program had been expected to prove extremely costly to the federal government, but bank assistance under the program has been in the black since March. All told, the government has received about $255 billion from banks under TARP, having lent out just $245 billion.

Treasury now estimates that when all is said and done, the section of TARP devoted to banks will net taxpayers a $20 billion profit.

But the Obama TARP, which was aimed at a bailout of GM and more specifically a complete screwing of that company’s bondholders on behalf of the United Auto Workers who broke the company in the first place, isn’t going so well. Looks like GM has more unsold inventory now than they’ve had since the fall of 2008, when they went broke in the first place. 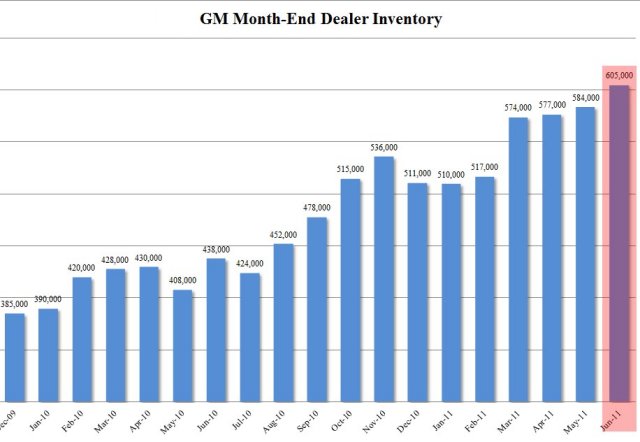 After GM’s truck inventory swelled to 122 days worth of average sales, the company said 100 to 110 will be normal going forward for such a large and complex line of vehicles, compared with 60 to 70 days for most models. Peter Nesvold, a Jefferies & Co. analyst, isn’t convinced. Ford Motor Co. (F), which makes similar trucks, is running at 79 days, and Nesvold says GM averaged 78 days on hand at year end from 2002 to 2010.

“It’s unbelievable that after this huge taxpayer bailout and the bankruptcy that we’re right back to where we were,” Nesvold, who has a “hold” rating on the stock, said in a telephone interview. “There’s no credibility.” In a research note he asked: “Is GM falling into old, bad habits?”

Both TARP’s sucked. But if the Obama gang attempts to claim credit for the bank bailout profit, let’s make sure they take responsibility for the disaster that was the TARP bailout of GM.