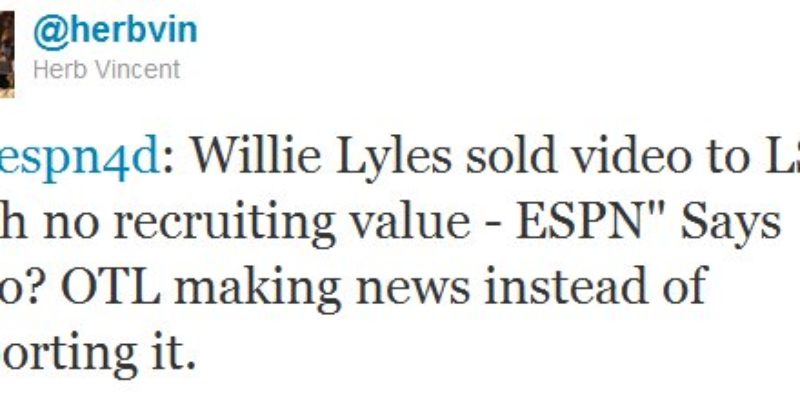 …I’ve been watching this story for a while and didn’t think it was worth crossing over into the sports realm to comment on, but with ESPN’s ridiculous foray into the issue last night I figured there was something post-worthy at long last.

My friend Kris Brauner, who does a terrific LSU sports blog called Saturday Night Slant, put together an excellent piece on the subject. The gist of Kris’ post is something I agree with, namely that ESPN’s story saying that the $6,000 LSU paid Lyles’ scouting service for video on recruits would have been wasted unless Lyles was giving the school something under the table is so much BS.

Back to what Kris wrote, the particulars get a nice fleshing out…

I figured I’d at least offer some counter points that are based on facts and some pretty reasonable assumptions:

1) As mentioned, LSU purchased the “JUCO per state” package for Kansas and California.  It just so happened that LSU offered and ultimately signed 4-star quarterback prospect Zach Mettenberger from Butler Community College in Kansas.  LSU also briefly recruited a receiver from Mettenberger’s team, Marcus Kennard, who ultimately signed with Texas Tech.   Included in what LSU received, and what they were really after, was video from Butler that showed Mettenberger and Kennard.  As for California, LSU heavily recruited a wide receiver from East Los Angeles College named Anthony Denham who ultimately signed with Utah.  So when LSU pays for and receives video of prospects they actively recruited and in one case, signed, how does that constitute “no recruiting value?”.   The answer is that Forde was wrong to say that because he either did not understand the situation or did not want to.

2)  In purchasing the “JUCO per state” packages from Complete Scouting, LSU purchased all material that Lyles had from the states of Kansas and California.   Since LSU was after film of the aforementioned players, is it really incriminating that they are not familar with all of the material that Lyles sent?  It’s what they paid for!  This is not hard.

3)  Lastly, the assertion that the junior college film was of “low quality” is not really newsworthy.   I have been following recruiting for quite some time, and I have yet to see any JUCO film that is worth a damn.  It’s not like these junior colleges have HD cameras set up from several vantage points on the field.  It is what it is.   To act as if the poor film quality is a revelation and to include in the headline is a stretch to say the least.

I’m not naive.  I realize that Will Lyles and Complete Scouting are not the typical scouting service.  But the $6,000 payment from LSU to Lyles is not going to get them into any trouble.  ESPN went looking for a story.  And when they did not find anything, they wrote the story anyway.

The last sentence is particularly on point.

The Lyles thing has always appeared to me to be a non-story. Lyles himself complained about all the procedural/paperwork hoops LSU made him jump through in order to do business with the Tiger football program; that kind of compliance regime doesn’t sound like a good mask for under-the-table foul play. If LSU was going to use Lyles for the kind of access that Oregon did, for example, they’d have to be idiots to document the relationship. As Oregon was, frankly.

And as both Kris and Vincent have noted, ESPN’s reporters have a lot of nerve passing judgement on recruiting videos. After all, ESPN is running their own subscription-based recruiting service and ESPN offers video highlights of recruits. And guess what? A lot of those highlights aren’t of much higher quality than the stuff they’re complaining about that Lyles gave LSU.

As Kris notes, high school and junior college footage are about the same; most of the material out there stinks. There isn’t a lot of TV coverage of each, so the stadium in which the typical high school or JC prospect plays in isn’t festooned with high-def video cameras. That Lyles gave LSU a bunch of material of perhaps shoddy quality largely reflects that reality. And that Lyles’ written material wasn’t great isn’t a huge surprise, either – I used to be in the college sports publications business, and I dealt with people like Lyles often. These weren’t particularly astute or literate folks. But you deal with them anyway, because that’s who’s out there. LSU isn’t in all that different a situation.

Sure, Will Lyles has become a hot topic in college football. And sure, ESPN ought to look into his activities. And sure, I’d rather LSU not have had anything to do with him – at least partially because it doesn’t look like they got anything of value out of him. But just because you investigate something it doesn’t automatically follow that you’ll strike gold. Part of good journalism is to recognize what’s a story and what isn’t.

A year or so ago, I got a tip on some creepy stuff going on at a couple of charter schools in Louisiana being run by the strange Turkish Muslim Fethullah Gulen movement, one of which was Kenilworth Middle in Baton Rouge. I even had some discussions with someone who taught at Kenilworth last year, and learned about all kinds of off-putting things. I got a bad feeling that this was a sketchy scene, and I wanted to do a big story on the Gulen schools in Louisiana.

But I didn’t have enough to run with. Nobody would go on the record about their experiences with the Gulen people. And while I had a host of anecdotal material about strange doings at Kenilworth, if I had run with it I would have rightly been accused of picking on the Muslims.

For a year I’ve been trying to find a smoking gun which indicated evidence that these guys were attempting to proselytize Islam through charter schools, or that there was some sort of cultural indoctrination going on at Kenilworth, or criminal behavior of some kind. But it just hasn’t been there. And I wanted to be somewhat fair; these guys might just be creepy in the way Turkish immigrants can be creepy and nothing more.

Now, the other school in Louisiana the Gulen folks run, or ran, was Abramson Science and Technology Charter School in New Orleans. The state Board of Elementary and Secondary Education just shut that place down amid an investigation of a sexual incident involving a couple of kindergartners and an accusation of an attempted bribe one of the Gulen people offered to an employee of the state Department of Education. There’s a state investigation rolling in on Kenilworth. There are also rumors that a class action suit on Abramson might be coming.

Meaning, now there’s a real story about this situation. And we’re going to have lots of material about it in the coming days.

If we’re going to analogize this, ESPN might ought to report the NCAA’s involvement in the LSU-Lyles situation. Except as of right now, there isn’t much. LSU has given the NCAA everything it has on the situation. And earlier this week, the NCAA praised LSU as a “model of institutional control” in its report on the Akieem Hicks case – in which a former assistant coach actually did break some rules in recruiting a player before he got himself fired and the player was sent packing before he could give LSU a competitive advantage. Does anyone really believe that if the NCAA thought there was gold in the Will Lyles thing they’d be talking about how cooperative LSU is? They’d have to be idiots to do that.

Fact is, while there is and has always been more than meets the eye with the Gulen people and it’s eventually going to be a major story there never has been much to the Will Lyles-LSU story. ESPN might be looking for a big headline, but they’re wasting their time and trashing a respectable and prominent athletic program without much gas in the tank.