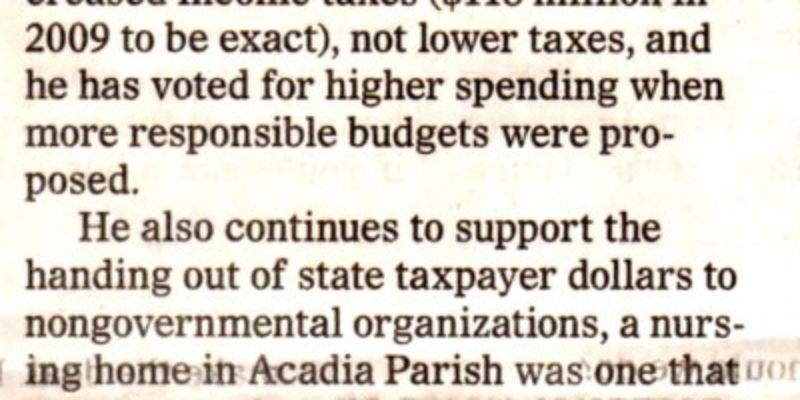 Last week, the Lafayette Daily Advertiser published a letter from me (see inline graphic), in regards to District 42 incumbent Jack Montoucet’s claim of fighting for lower taxes and less spending.  The scanned letter is attached here, as The Advertiser did not publish it online.  My letter stated the fact that Rep. Montoucet voted for increasing state income taxes by $118 Million in 2009 and has voted for larger, irresponsible operating budgets (specifically 2010) when better alternative was offered.

I also pointed out his support of funding to non-governmental organizations, while the state is now facing short-falls, having to cut funding to REAL state responsibilities and services.

This morning, a letter appeared in the Advertiser, responding to mine.

Nice how this letter headlines the online Opinion page!

However, I would like to address where I received my facts, so as to protect against a charge of false accusations.

1)  True, Jack Montoucet voted AGAINST the legislative pay raise.  I’ve never stated otherwise, and he should be thanked for that vote.

2)  Rep. Montoucet’s voting record may very well reveal a net of voting to lower taxes over the past 4 years in office (I honestly don’t know the amount).  In fact, probably EVERY legislator’s record, even the most liberal, would show that.  Every single legislator voted to repeal the Stelly Income Tax in 2008.  However, in 2009, when a group of Senators, both Republican and Democrat, attempted to increase income tax burdens on Louisiana filers by $118 Million, Rep. Montoucet voted with them.  Fortunately, the measure ultimately failed.

Here is how it developed, with a link to the vote:

A majority of Senate lawmakers decided in 2009 to support a bill by Sen. Lydia Jackson – D, Shreveport – HB 335, which would take away mortgage deductions and other itemized deductions, which many state income tax filers benefit from.  This would amount to an increase of state income taxes by $118 Million.  The bill passed out of the Senate 29-9.  However, House members knew state taxpayers would not be happy with this, and Speaker Jim Tucker refused to send the bill to a House committee, even citing, correctly, that the tax increase was Unconstitutional.  According to the State (and U.S.) Constitution, all tax increases must originate in the House.

Therefore, to combat Speaker Tucker and House members, the Senate then took HB 689, a bill completely unrelated to taxes, which recently passed the House, and amended it to include the language from SB 335, thus, inserting the tax increase.  The completely re-written bill then passed out of the Senate 29-6.  The House then voted to request the Senate to withdraw its amendments.  Rep. Montoucet voted NO on the request, but it still passed.  The Senate voted NO on the House’s request, and sent the bill back, tax increase still in tact.  At that point, House members voted on concurring with Senate amendments, which the vote FAILED (killing the tax increase).  However, Rep. Montoucet voted YES with the other 33 House member (many with liberal voting records) to keep the $118 Million income tax increase.

And here’s the link to the vote: http://www.legis.state.la.us/billdata/streamdocument.asp?did=665591

3)  Voting to cut spending… since spending has been cut over the past 4 years, that all legislators would have a voting record showing reducing spending.  However, the fact remains that much of what has been done is merely kicking the can down the road, not addressing the real problems, and plugging too many re-occurring deficit holes with one-time monies.

Back in 2010, the House passed a budget much in line with what Governor Jindal originally drew up.  However, the Senate then raided several trust funds and rainy day funds to tack on an extra $2 Billion in spending of one-time revenues on re-occurring expenses.  Hence, merely kicking the can down the road, not passing any real spending or structure reforms.

This bill went back to the House, and Governor Jindal, not wanting any real confrontation, lobbied House members to approve the Senate’s irresponsible additions.  To make things worse and to show how politics is played, the Senate had stripped the Operating Budget bill of all of the House member’s line-item pet projects, some of which included monies to NON-GOVERNMENTAL ORGANIZATIONS.  The Senate then promised House members their pet projects would be restored in an unrelated House bill, currently sitting in the Senate, if they approved the additional spending.  (What is this with amending bills completely out of their original form?)

The link to the vote: http://www.legis.state.la.us/billdata/streamdocument.asp?did=720841

Imagine the shock (obvious sarcasm) to many of us when the following year, a budget short fall of $1.5 Billion was projected.  Maybe they should have approved that extra $2 Billion in spending?  Kicking the can?

4)  The nursing home project.  In 2008, LA Government watch dog C.B. Forgotston uncovered the spending approved in HB 2, the state Capitol Outlay bill.  This bill is supposed to be for construction projects, and should be construction for government projects and responsibilities, ie highways, bridges, etc.  Unfortunately, this has been used as another source of pet projects, the legislative slush funds, and ripe for legislators to buy votes from organizations who are not part of government.

Listed amongst the projects was money to a nursing home in Crowley.

Now, no one wants to throw elderly people out of nursing homes.  However, real state government responsibilities, such as roads, Medicare, Medicaid, education, charity hospitals, cannot property meet obligations, we cannot afford and should not be subsidizing the operations and salaries of Non-Governmental Organization, whether it be private nursing homes, neighborhood associations, festivals, etc. (all the these listed examples are the types of NGO projects commonly found in budgets for vote-buying).

2008 NGO requests can no longer be searched online, but the one request I still have in my email archives is this request, for another NGO in Acadia Parish.  The copied and pasted info from my archive reads the following:

The recipient entity’s mailing address :
225 N. Avenue C
Crowley, LA 70526
Type of Entity :  Non-Profit Corporation
If the entity is a corporation, list the names of the incorporators: Seventh District Missionary Baptist Association
The last four digits of the entity’s taxpayer ID number:  2292
Which legislator requested the amendment?  Montoucet, Jack
Which legislator is the sponsor?
Provide the name of each member of the recipient entity’s governing board and officers:
Willie Maynard, Jr., President
James Proctor, Chairman
Glen Richard, Treasurer
Georgia Stevens, Secretary
Freddie Brown
Freddie Jack
Michael Chaney
Paulette Green
Henry Emanuel
Gloria Grayton
Horace Lewis
What is the dollar amount to be appropriated by the amendment?  $100,000
What are the entity’s budgeted amounts for the following?:
Salaries. . . . . . . . . . . . . $84,120
Professional Services. . . $0
Contracts . . . . . . . . . . . $0
Acquisitions . . . . . . . . . $0
Major Repairs . . . . . . . $0
Supplies. . . . . . . . . . . . $6,000
Other. . . . . . . . . . . . . . $9,880
What is the entity’s public purpose, sought to be achieved through the use of state monies? To continue providing decent, safe, affordable housing opportunities to the low, very low, and moderate income families throughout our target area.
Provide a summary of the project or program: Housing counseling, including budget, credit, pre-purchase, and post-purchase will provide families with the education and guidance needed to acquire and maintain home ownership. “First-time homebuyers” workshops are provided to educate families on the total aspect of home ownership, single and multi-family development for families in need.
What are the goals and objectives for achieving such purpose? The Pavilion’s goals and mission can be achieved by maintaining staff, providing decent wages and benefits and reaching those families less likely to receive home ownership opportunities. Single family homes are provided to those individuals who cannot afford a conventional loan. Housing counseling plays an integral part in achieving the goal of providing decent, safe, affordable housing opportunities to the low, very low and moderate income family.
What is the proposed length of time estimated by the entity to accomplish the purpose?  One year

The NGO request was in fact sponsored by Rep. Montoucet, which interestingly enough, was for an organization where a member of the State Democratic Central Committee serves on the board.  This shows the problems with legislators being able to line-item money for their pet projects.

I stand by what the pro-Montoucet writers calls my “attack” on Rep. Montoucet’s conservative voting record.  I have not attacked and will not attack Jack Montoucet personally, and I would hope no one within the campaign would do such.

However, the voting record does not lie.  The voting record reveals who a person is as an elected official.  Judging by these votes, amongst others, one can accurately draw the conclusion that Jack Montoucet’s voting record is amongst the most fiscally liberal/leftist is the legislature.

I have no doubt that Jack Montoucet is a social conservative.  He has voted pro-life and no doubt he is pro-2nd Amendment.  However, my letter was to address his statements regarding his FISCAL voting record, of which, I stand by my criticisms.