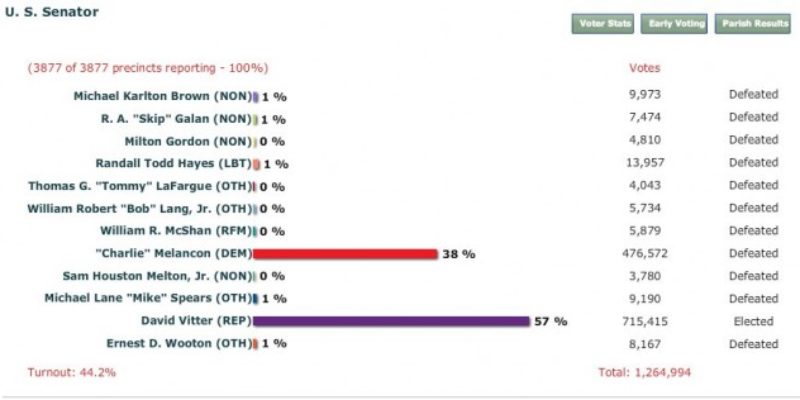 UPDATE: We were right the first time.

Earlier today, we jumped the gun in noting that Rob Marionneaux had failed to disclose the results of the Anzalone-Liszt poll he commissioned two weeks ago, suggesting that since Marionneaux failed to comment on that poll in an interview with the Advocate’s Michelle Milhollon about a potential gubernatorial run while making noises about wanting to spend time with his kids that the poll’s results were too lousy to release.

But we just missed the mark by a few hours. Because this evening, Marionneaux did put out the poll. The Times-Picayune has the story, and it is precisely what we said would happen (which you can evaluate for yourself below)…

Brandishing numbers from a self-commissioned poll, state Sen. Rob Marionneaux appeared to be inching closer Thursday to being the first major Democrat to challenge incumbent Republican Gov. Bobby Jindal in the fall election. Marionneaux, however, said he is still mulling his options.

Marionneaux said he is using the results of the poll he commissioned from Anzalone-Liszt Research, which included positive information about Marionneaux and negative statements about Jindal, to drum up financial commitments from donors for a race that he estimated will cost him at least $3 million.

“I’m not getting in the race to be the sacrificial lamb or to say let’s have a race for the sake of having a race,” Marionneaux said. “That wouldn’t be very smart.”

The poll of 504 likely voters, taken Aug. 13-18, shows voters initially favoring Jindal by a 59 percent to 30 percent margin in a head-to-head matchup, and it shows Marionneaux, a senator from Livonia who can’t seek re-election because of term limits, with poor statewide name recognition.

Marionneaux showed the results of the poll to a reporter, but he would not provide a copy of the full survey and would allow only limited note-taking. He said the outcome was better than he had expected.

“When (voters) are introduced to me and my profile, they have a very positive opinion,” Marionneaux said. “The question becomes: In a short time, can enough money be raised to defeat the governor?”

The Jindal camp is laughing like hyenas right now…

Jindal campaign manager Timmy Teepell described the survey as a “push poll” and said the results aren’t credible because the respondents were given negative information about Jindal. He noted that it came from the same firm that produced a series of surveys last year that purported to show Democrat Charlie Melancon with a chance to beat Republican David Vitter in the U.S. Senate race.

“This poll is a joke. Push-polling is not scientific,” Teepell said. “It plays upon the worst instincts of people, and the results aren’t credible. But this is not the first time Anzalone-Liszt has engaged in the practice in Louisiana.”

ORIGINAL (Aug. 15): Last year, one of the more entertaining spectacles we had the pleasure to cover was the saga of Charlie Melancon’s campaign attempting to snooker donors into the impression that he was actually viable as a challenger to David Vitter for the Senate.

Everyone knew that Melancon was going to get killed. Everyone. Or at least almost everyone. There were a few folks who were bamboozled into believing otherwise, though.

Which was why Melancon was able to raise $3.96 million last year, $2.6 million of which came from individual donors. That wasn’t really competitive with Vitter, but it was enough to at least get ads on the air and finance a direct mail campaign.

But as we noted several times during the campaign one of Melancon’s chief tactics to hoodwink those donors into the idea that they weren’t wasting their money on a hopeless campaign was the use of John Anzalone as his pollster.

As we noted back on October 15 of last year…

Which the Melancon campaign did on Wednesday, trumpeting a poll which had Vitter ahead only 49-42 – a much closer race than any poll previously done during the campaign. On the surface, that would indicate a tightening race and something worthy of the kind of national attention and Democrat money Melancon’s camp would hope for.

There’s a problem, though – the poll is BS.

The pollster in question is Anzalone Liszt, which is a Democrat firm notorious for generating delusional results for hire. For example, it was Anzalone who in the fall of 2009 cranked out a survey on Obamacare which returned glorious approval numbers and contributed to several Democrats opting to back it. Mary Landrieu was one of them. Events proved that Anzalone was quite a bit off the mark, as it turned out, and many of those acting on that survey’s numbers are less than three weeks away from being hung by the voters.

But Anzalone is Melancon’s pollster. He first released a survey on the Melancon-Vitter race in March, in which Vitter held a 48-38 lead. Melancon’s spin doctor James Carville used those numbers to justify a spew of gobbledygook about how the voters hate Vitter, he’s one piece of bad press away from getting tarred and feathered and Charlie-Boy’s got him right where he wants him. That was the opening act in what has been one of the most low-brow, dumbed-down U.S. Senate campaigns of all time in Louisiana – which is saying something. Melancon’s campaign has been nothing but hookers, campaign staff behaving badly and provable lies about BP. The needle hasn’t moved at all.

On October 20, Anzalone put out a memo which doubled down on that optimistic seven-point spread…

Louisiana’s U.S. Senate race continues to trend in Charlie Melancon’s favor. David Vitter’s lead has shrunk to three points (45% Melancon / 48% Vitter) – down from seven points last week (42% Melancon / 49% Vitter) and double digits last month (39% Melancon / 52% Vitter). If Melancon is able to solidify African American voters to traditional Election Day levels, the Vitter margin further erodes (47% Melancon / 48 % Vitter). Undecided voters give Melancon a better job rating than they do Vitter – and are warming to Melancon as the election nears, while cooling on Vitter. Vitter’s initial funding advantage allowed him to out-communicate Melancon for much of the campaign – but now that both candidates are on the air in a real way, Melancon is closing quickly. If Melancon is able to finish with a strong paid communications presence, Louisiana is poised to elect a new senator.

State Sen. Rob Marionneaux, D-Grosse Tete, said he is conducting a poll that will determine whether he enters the governor’s race.

Marionneaux refused to identify the name of the company that will question 600 voters statewide for two days.

Marionneaux said he is paying for the poll, which he said demonstrates his degree of interest in running against Republican Gov. Bobby Jindal on Oct. 22.

“If I’m willing to conduct a poll and spend considerable money on it, obviously I’m serious,” Marionneaux said.

Jindal’s campaign aide, Timmy Teepell, refused to talk about polls the governor may or may not be conducting.

Here’s what to expect. Sometime this week or maybe next week, there will be a release out of Marionneaux’s camp with “shocking” poll numbers which indicate that Bobby Jindal’s job approval numbers are horrendous, that his support is soft as a baby’s butt and that Marionneaux polls within 10-12 points of the Governor despite a vast deficit in name recognition. Anzalone will be quoted in the release stating that the numbers show Jindal is beatable, that a good campaign by Marionneaux will beat him and that the opportunity is there to take down one of the GOP’s national rising stars with enough resources.

And Louisiana Democrat Party chairman Buddy Leach and/or executive director Renee Lapeyrolerie will be quoted as saying something about how the state party’s comeback begins here, that they’re nowhere near as dead as people are making them out to be and that Marionneaux has what the voters want – he’s a conservative Democrat who fights like hell for ordinary folks and against all those corporate crony bad guys. All that’s required is for enough Louisiana people to find out about ol’ Rob, and Jindal’s got a real fight on his hands.

That’s the spin. Just remember that it has a main purpose, which is to separate the gullible from their sheckels in an effort to raise a war chest. Marionneaux’s not stupid; even he won’t really believe it.

The real takeaway from this is Marionneaux is serious enough about running that he decided to commission the poll from Anzalone. Whether he’s picking up the tab for it or Leach is, we don’t know. If he does get in, though, he’s got the same major ethics problem that the Dems’ other favorite Caroline Fayard has. He’s also connected to a rather sketchy video poker enterprise in Illinois which has attracted the attention of the papers up there – and not in a particularly good way.

And Jindal has $9 million in a campaign war chest.

Y’know what happens when you’re a candidate whose value proposition is that the voters don’t know you yet and who has a big ethics boo-boo of recent vintage hung around your neck and you run against a guy with $9 million in the bank?

Sure you do. By the time he’s through with you everybody and their brother thinks you’re a crook. Worse than that, you’re a loser on Election Night and your campaign workers get sloppy drunk at a victory party which comes off more like an Irish wake. Melancon’s shindig last fall was at the same hotel in Baton Rouge as the ones Jay Dardenne and Bill Cassidy threw, and the sour pusses coming out of that soiree around 10:30 p.m. were something to behold. That’s Marionneaux in a couple months and change.

But hey – who knows? Maybe this time Anzalone is right and there’s a real race to be run against Jindal. If so, good. We could use the entertainment. Just so long as Marionneaux doesn’t end up bitter and churlish if he gets beat. We saw enough of that last year with Anzalone’s previous statewide Louisiana client.