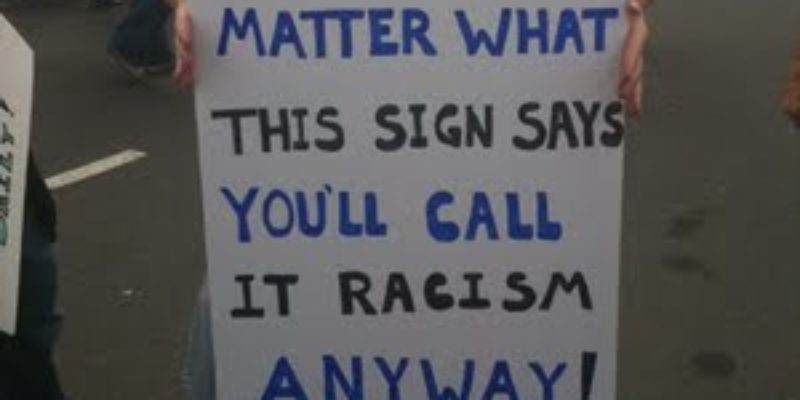 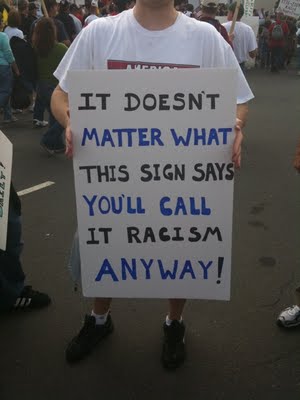 Well it happened again- I was called a racist for not worshiping Obama. The difference this time is that it was by someone I knew, not some random person on a message board.

This woman and I had been in a play together, that ironically enough, was about little white and black girls growing up in Alabama during the Civil Rights movement. I played a character who was an absolute racist, and I had confided in this woman about how hard that was for me. The only way I kept going through it, was that I knew I was sending an important message.

The incident took place on Facebook, on a status about the new movie “The Help” I was basically saying that it was important for people to see movies like this, because of what they can teach us. You would think that as a leader in the African American Community in my area, she would have applauded my stance, but instead she decided to attack me for my profile picture, which is a collection of political bumper stickers against Obama and the Democrats. Here is the conversation that followed:

XXXXXXX: Deanna-You know I love you girl but you know you can’t comment on this thread with an anti-Obama “keep the change” profile pic and preach that people need to re-examine how they think about race. If WE never had change, WE would never have progress.

Deanna Marie Candler:  I respect you a lot, but it is very rude of you to act like Obama’s race has anything to do with my opposition to his policies. I would also never vote for Hillary Clinton, John Kerry, Nancy Pelosi or Harry Reid, even though they are white. I have no problem with the color of his skin, and I would have expected you to at least know that much about me.

XXXXXXX: What change are you referring to then?

XXXXXXX: When Clinton took office, where was the tea party and the debt ceiling objections and the split congress?

XXXXXXX: Where was the outrage when the congressman used the “tar baby” analogy?

Deanna Marie Candler: It’s a metaphor, his catch phrase was “hope and change” and I don’t think that it has been change for the better. Again its about his policy.Clinton worked with both parties much better than Obama has, and the economy and government spending  were not in the situation that they are in now… but even then it’s not like I can be held responsible for what people did or didn’t do when I was 2. And as far as tar baby, the statement was OBVIOUSLY not intended to be racist, in the context he said it, it was clear what he meant. He was referring to the brier rabbit type, where when you touch it you get stuck. Its unfortunate that he used a term with negative connotations, but he apologized for his mistake. I honestly had never even heard that it was a racist term, and was very confused when I saw the article about it. I had to google the term, I had only ever heard it from the brier rabbit stories I read when I was little. Why should I support a president who supports abortion, wants to cut the military, wants to force me to buy health insurance, and whose economics I am opposed to? Am I supposed to forget all of that so that I don’t offend anyone? I would not support a white president who supported those things either. I am a Republican, I am not going to like whoever the Democratic president it, just like you wouldn’t be likely to support a Republican. But I would never accuse you of not liking Bush because he is white.

XXXXXXX: Good luck with being friends with only women who have never had an abortion. My advice if you are pro-life: Don’t get pregnant unplanned. It’s that simple.

Deanna Marie Candler: I’m not sure what that has to do with anything, but I wouldn’t refuse to be friends with someone because they had an abortion… several people who are very close to me have, and I still love them despite the fact that I disagree with that choice. I just wouldn’t ever vote for someone who supports it. I don’t agree with it, so why wouldn’t I vote that way?

XXXXXXX: Abortion is just a side issue to try to justify being against the President. It’s old rhetoric. A woman having an abortion two states away does NOT affect my household, my income or my salvation. I’ve been to the local Republican luncheon and I can read between the lines and upside down dear. People advocating the return to the original constitution is as clear as church glass. All that we need to take the country back is just crap! Take it back from whom? Girl please! Everyday I am bombarded with facebook posts against the President and a blatant disrespect for the person we elected. It is downright shameful. I am very proud that my family and my peers NEVER openly disrespected a U.S. President regardless if we voted for him or not.

Deanna Marie Candler:  Wow, my sincere belief in the sanctity of life is just a front for racism. Thanks for clearing that up for me. I mean, what was I thinking? I can’t believe that all this time, even before I even knew who Obama was, I thought that I opposed abortion so much because I was almost aborted. It turns out I was just mentally preparing myself to be a bigot.

XXXXXXX: I’m sure most of us were almost aborted…especially those conceived during the Civil Rights movement.

Deanna Marie Candler: Why am I not allowed to just believe what I believe? Why does it have to be because he is black? Why do you have to attack my character and trivialize my sincere beliefs? Beliefs I held long before Obama was elected president? Is being a racist the only reason anyone can oppose him?

She never answered, instead she deleted the whole status.

I was floored by the complete disregard she showed for all of my reasons and arguments, choosing instead to attack my beliefs as a “front” and attempting to turn me into some horrible, judgmental person who will only associate with people who are just like me. She also attempted to accuse all Republicans and Tea Party members of wanting to basically return to slavery (aka her definition of the original Constitution).

Never-mind the fact that I’ve been a pro-life advocate since I was 16, I just concocted that position to oppose a black man that I had never heard of. Forget the fact that I actively speak out against racism and participate in activities that attempt to teach people not to judge one another- if I didn’t vote for Obama, then I MUST be a racist somehow.

In truth, this woman was the one being racist. She was judging me based on the color of my skin: I am white so I must be a bigot who only hates Obama because of the color of his skin. Her refusal to accept any of my reasons, and her inability to answer my final post show who is truly racist in this instance.

In his “I Have a Dream” speech, Martin Luther King hoped that one day his children would be judged not by the color of their skin, but by the content of their character. I think he would be disappointed with the actions of the lady in question, and others like her, who clearly assume that the color of my skin determines my character.