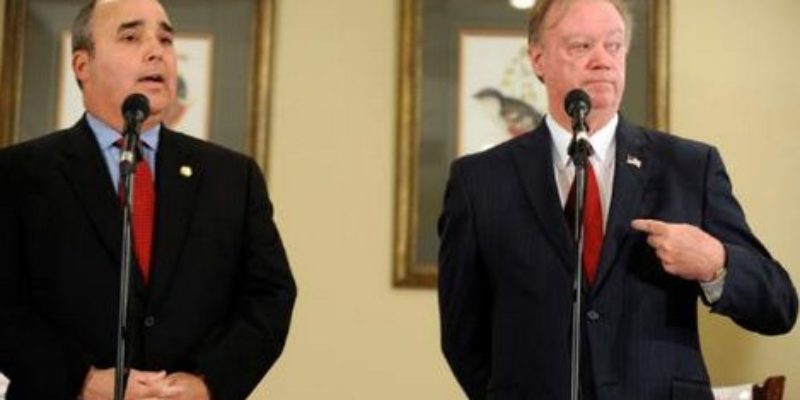 With some 60 percent of the state’s voters undecided on the Secretary of State race between incumbent Tom Schedler and House Speaker Jim Tucker, the former is levying a major allegation on the latter – specifically that Tucker used his role on the State Bond Commission to get a better price for a piece of property he owns through a Section 8 housing deal (the bond commission awarded $10 million in tax-exempt funds so a non-profit group could buy an apartment complex Tucker owns).

And as a corollary to that allegation, Schedler’s campaign says Tucker leveraged the Bond Commission deal into a major fundraising opportunity for his Secretary of State campaign. From a release this morning…

The law firm involved in the deal, Crawford Lewis, made $10,000 in fees to handle the bonds. A recent invitation was sent out from the law firm’s principle, Scott Crawford, who is hosting a $500 per person political fundraiser at his home tomorrow evening in Baton Rouge benefiting none other than Jim Tucker’s campaign for Secretary of State.

“To see something like this begs the question. Is this the type of ethics reform Jim Tucker is promoting in his campaign ads? It certainly isn’t the ethics reform Governor Jindal envisioned,” said Secretary of State Tom Schedler.

This isn’t Tucker’s first time at an attempt to enrich himself with public resources. As Speaker of the House, Tucker led the effort to try and double legislative pay. The bill was vetoed by Governor Jindal.

Schedler’s campaign provided a PDF file with documentation of the Bond Commission request and a copy of the fundraiser invitation, which it says shows a pay-for-play connection to the Section 8 deal.

On November 10, 2010, the Executive Committee of the Louisiana Local Government Environmental Facilities and Community Development Authority passed a resolution providing for a non-profit corporation called the Jericho Housing Corporation to purchase section 8 housing by using bonds to mature not later than 40 years.  The property being purchased is Jackson’s Landing Project (North) owned by Jim Tucker.

In the 2011 Session of the legislature, Mr. Tucker amended SB269 (Now Act 408) to provide that the Louisiana Housing Corporation (formerly Louisiana Housing Finance Authority) receive the monies from the Supplementary Appropriations Act of 2008.

In the attachment titled “Public Notice or Legal Notice #: 2715502” the entity contracted by the Division of Administration, states “Owners awarded PBV (Project Based Vouchers) will enter into a Housing Assistance Payments contract terms of at least three years with options up to thirty years, including extensions.”  Thirty years?  It would certainly make a property valuable and ripe for a sale.  The Notice states further; “Successful Owners will benefit in several ways from participation in this program: additional financial security from the government-guaranteed stream of rental payments under the Project-Based Voucher Program; vacancy payment available for up to 60 days at 80% of the contract rent;…and assistance in filling and marketing available units from local agencies that will refer eligible applicants to the Owners.  Who wouldn’t buy this?

The notice goes on to state, “This Notice is issued as part of LHA’s efforts to successfully implement a program that includes 2,000 units of Project-Based Vouchers for Permanent Supportive Housing authorized and funded by the Supplemental Appropriations Act of 2008.”  The bill referred to and attached is ACT 49 of 2008.  It is also interesting to NOTE that the Speaker amended this funding into the bill (SB 269/ACT 408) creating the Louisiana Housing Corporation in the 2011 Session to make certain that the same monies would be used by this entity as well.

If 25% of the 273 Project-Based Vouchers (vouchers that are payable at the first of every month by auto deposit…see form for direct deposit) and there were only 2,000 statewide that amounts to the Speaker of the House of Representatives receiving for one property 3.45% of all the PBV’s in Louisiana.  The analysis of the State Bond Commission shows at the end of paragraph four that 45% of the units in this one complex receive either PBV’s or Tenant Based Vouchers.  That means that no less than 123 units of the 273 available have Section 8 vouchers attached to them.

Since the Speaker owns 11 Multi-family property businesses, how many vouchers did his properties receive to guarantee income?  We know he tried to sell 60% Jackson’s Landing Project (South) while keeping 40% in a trust for his family…who wouldn’t with a guaranteed stream of income using the voucher programs?

Tucker’s campaign hasn’t responded to the allegations. We’ll update when they do.