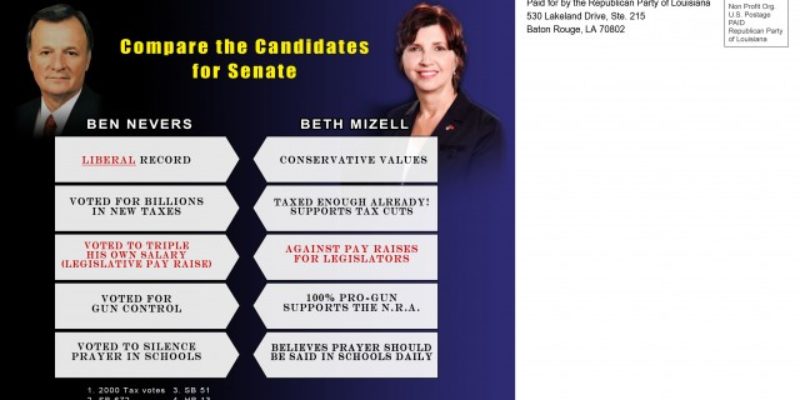 It seems Nevers has been pocketing some major coin in consulting contracts from school boards in and around his Washington Parish-based district, which since he’s the chair of the Senate Education Committee, has a whiff of pay-for-play to it. And the information has made its way to a mail piece the party put forth with bombshell allegations plastered all over it… 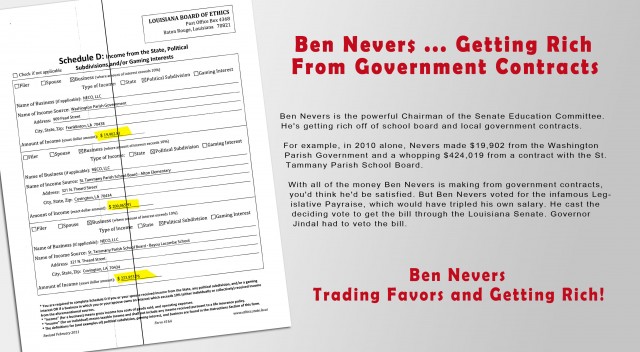 State GOP executive director Jason Dore’ hammered Nevers on the issue. “How could Sen. Nevers possibly oppose the educational establishment when the school board has paid him over $400,000?,” Doré asked. “It is pretty clear why the Senate Education Committee was the graveyard for education reform legislation during his chairmanship.”

Mizell has been considered a decent shot at a GOP knockoff of a Democrat incumbent, though the best chance for the Republicans to gain a seat on Saturday is still considered to be Garrett Monti, who’s running against Democrat state representative Gary Smith in Senate District 19, currently held by Senate president Joel Chaisson (D-Destrehan). But an upset might be brewing in District 28, where Paul “Doc” Miller, a GOP challenger, may be gaining on Senate Democrat Caucus president Eric LaFleur.

Republicans look virtually assured to control 24 of the state’s 39 state senate seats. If they can manage to pick up two of the three seats between Miller, Monti and Mizell on Saturday, they’ll hold 26 of 39 – enough for a 2/3rds majority required to pass a constitutional amendment without Democrat support.