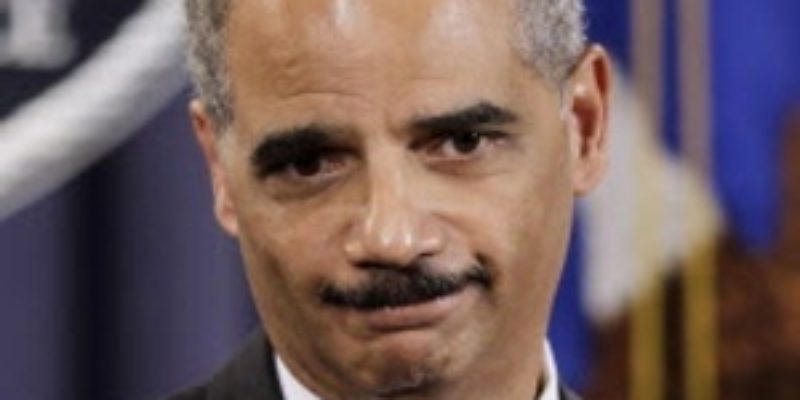 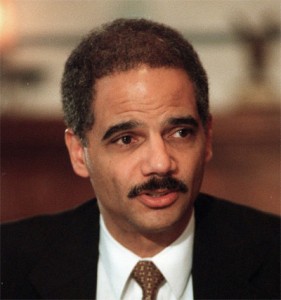 The Obama Administration and their cohorts in Congress are working hard to assure that every fraudulent vote is counted for Democrats in next year’s elections. Yesterday, Attorney General Eric Holder unabashedly laid out a plan to blunt states’ efforts to protect ballot integrity at a speech given at the LBJ Library in Austin, Texas.

With the obligatory references to LBJ’s struggle to sign the Voting Rights Act of 1965, Holder made it sound as if blacks are being currently be beaten away from ballot boxes in the Jim Crow South as he insidiously stirred the racial pot to win support for measures that would inevitably lead to more vote fraud.

Today, as Attorney General, I have the privilege – and the solemn duty – of enforcing this law, and the other civil rights reforms that President Johnson championed.   This work is among the Justice Department’s most important priorities.   And our efforts honor the generations of Americans who have taken extraordinary risks, and willingly confronted hatred, bias, and ignorance – as well as billy clubs and fire hoses, bullets and bombs – to ensure that their children, and all American citizens, would have the chance to participate in the work of their government.   The right to vote is not only the cornerstone of our system of government – it is the lifeblood of our democracy.   And no force has proved more powerful – or more integral to the success of the great American experiment – than efforts to expand the franchise.

Holder went on to say that new common sense state laws, like requiring people to present a photo ID to vote, are “under review” by the DOJ.

Since January, more than a dozen states have advanced new voting measures.   Some of these new laws are currently under review by the Justice Department, based on our obligations under the Voting Rights Act.   Texas and South Carolina, for example, have enacted laws establishing new photo identification requirements that we’re reviewing.

The push by the left to make sure vote fraud is protected is multifaceted and includes motor-voter lawsuits flied against state election officials for violations of Section 7 of the National Voters Registration Act of 1993 by the DOJ and groups like ACORN. I have written about this on The Hayride before. Also, the Deceptive Practices and Voter Intimidation Prevention Act of 2007, originally introduced by then-Senator Barack Obama and Sen. Charles Schumer, has been resurrected by Schumer and Sen. Ben Cardin. This is the law meant to protect Democratic voters who are, apparently, so stupid that they reportedly often end up as victims of prank telephone calls on election day Tuesdays telling them to vote on Wednesdays.

Most astounding of all are plans to make sure voters don’t even have to register themselves to be registered voters, something that Holder says is suppose to end “chaos at the polls.”

All eligible citizens can and should be automatically registered to vote.  The ability to vote is a right – it is not a privilege. Under our current system, many voters must follow cumbersome and needlessly complex voter registration rules. And every election season, state and local officials have to manually process a crush of new applications – most of them handwritten – leaving the system riddled with errors, and, too often, creating chaos at the polls.

Fortunately, modern technology provides a straightforward fix for these problems – if we have the political will to bring our election systems into the 21st century.   It should be the government’s responsibility to automatically register citizens to vote, by compiling – from databases that already exist – a list of all eligible residents in each jurisdiction.   Of course, these lists would be used solely to administer elections – and would protect essential privacy rights.

Nope, no potential for chaos when the government is charged with automatically registering people to vote, whether they are aware of it of not.

I wanted to pick Secretary of State Tom Schedler’s mind on the things that Holder is talking about, particularly with regard to letting people vote without a photo ID–he recently debated the issue on a New Orleans radio station–and especially about a proposed database  to automatically register voters. 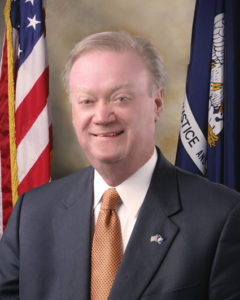 Schedler isn’t exactly a fan of Holder and prefaced his remarks by saying, “There are probably not a lot of things that Eric Holder would be for that I would be for.”

Schedler sees the Obama Administration’s plans to “fix” voter disenfranchisement as having the potential to cause lots of problems.  I didn’t want to put him on the spot by making him say they are blatant attempts to perpetrate vote fraud in the coming election, which they are. To Schedler’s credit, he said so without saying so.

“I think it would certainly open the door for the problems with vote duplication and voter fraud in the state,” he told me.

Like me, Schedler has no idea how automatic voter registration would work, especially when it comes to naming party affiliation or determining that people actually lived where they are listed to live.

Schelder asked a question that every election official should be screaming to every leftist trying  to grow vote fraud while pretending they are working to keep voters from being disenfranchised.

“It’s everybody’s right and a privilege to vote, but if someone doesn’t have an interest in voting are we going to have to spoon-feed them to get them to vote? Is it Big Brother’s job to do that?”

Before I finished talking to Schedler, he got a righteous dig in at Holder for using the DOJ to sue election officals under Section 7 of the motor voter law for not registering enough people through entitlement programs, but ignoring violations under Section 8. Section 8 of the law deals with removing fraudulent names from voter rolls. Sen. David Vitter recently called the DOJ out on this in a letter to Holder.

The Obama DOJ, or course, selectively uses the law to promote and protect Democratic policy and politicians, as evidenced by the Operation Fast and Furious scandal and the refusal to prosecute the New Black Panther case.

New information that reveals how names were forged on a petition in the Indiana Democratic presidential primary election to get Obama on the ballot  is telling about how fraud is modus operandi in electing Democrats. The current White House crowd does come from Chicago, after all.

Is not remarkable that all this fraud is going on–it’s been that way for a long, long time. What is kind of remarkable is how out in the open the Obama Administration has become in working to make sure it continues.

Interested in more national news? We've got you covered! See More National News
Previous Article Occupy Wal-Mart? Only If You’re Not All That Sharp
Next Article Another Major Sponsor Pulls Advertising From Muslim Propaganda TV Show