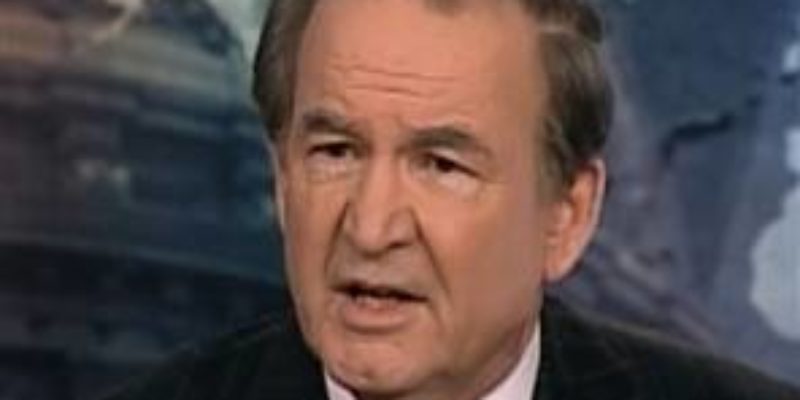 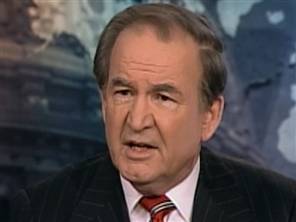 It comes as no surprise that MSNBC’s decision to can Pat Buchanan, who worked as a paid contributor, coincides with the network giving race-baiter and Tulane professor Melissa Harris-Perry her own show.

Buchanan hasn’t been seen on MSNBC since October, citing health issues as the reason for his absence. It looks like he will be gone from MSNBC for good, because the network has apparently buckled under pressure from leftist activist group Color of Change, which has been circulating a petition to have Buchanan fired. MSNBC President Phil Griffin said that some things Buchanan wrote in his new book, “Suicide of a Super Power” are questionable and exclude him from MSNBC’s pristine broadcasting.

“I don’t think the ideas that [Buchanan] put forth [in the book] are appropriate for the national dialogue, much less on MSNBC,” Griffin said, although it’s not clear exactly which ideas he is talking about. My guess would be any ideas Buchanan has aren’t appropriate for MSNBC.

Some of the things that Color of Change alleges against Buchanan is defense of Adolph Hitler, saying that both sides were right in the Civil War and implying that white people are smarter than black people.

I don’t know everything that Buchanan has written about Hitler and I haven’t read any of his new book and only read parts of his other books that deal with the build up to World War II.

The things that I have read from him about the subject have argued whether Hitler initially started out wanting to take over the world or if he was trying to create an alliance with Poland like ones Germany had with Italy and Spain before things went awry. I don’t ever remember reading anything that Buchanan ever wrote that touted Hitler as a great guy.

Similarly, arguments that I have seen from Buchanan on the Civil War have centered on whether it was a necessary war. Historians and armchair historians, like Buchanan, love to muse on whether slavery could have been ended without the death toll–600,000 plus–and economic devastation of the Civil War and will continue to do so until the end of time.

I have never heard or read anything from Buchanan about whites being smarter than blacks, but given his propensity to wander into jungles of politically incorrect thought I wouldn’t be too surprised to discover something from him that might be construed as such.

A statement from Color of Change blasts Buchanan for feeding fires of racism:

“He takes every opportunity to stoke the racial anxiety and fear that exists among some white people. In short, Buchanan wants to pit white people against people of color,” the organizers said. “He believes in it, he thinks it’s good political strategy, and in his new book he encourages the GOP to become ‘the white party.’”

Color of Change has led other campaigns against conservatives pundits, like one Andrew Brietbart to get him banned from the front page of The Huffington Post and to get Glenn Beck off of Fox News.

MSNBC, of course, knows exactly who its audience is and it looks like Buchanan is outta there.

Meanwhile, Harris-Perry is gearing up for her new show and Rev. Al Sharpton continues on the network with “PoliticsNation”. 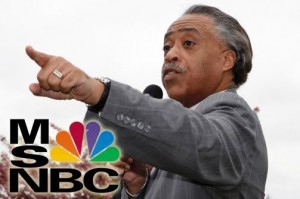 Let’s examine the hypocrisy of MSNBC for giving Buchanan, a contributor, the boot while allowing Sharpton to continue to run his big mouth on his own show.

Both Buchanan and Sharpton are controversial figures, but Buchanan hasn’t built his career on stirring up racial tension like Sharpton has. As far as I can tell, no one has ever died as a result of the things Buchanan has said.

He led a protest back in 1995 against a Jewish man whom he called a “white interloper” that owned a Harlem store called Freddie’s Fashion Mart and the protest led to the murder of several store customers by a black demonstrator.

That was just the most egregious of the fallout from the racial troubles that Sharpton has exacerbated as he has carved a career by using race to enrich himself.

Other highlights include the Tawana Brawley case–in which a black teenager falsely accused white men of abducting and raping her– and the Duke Lacrosse case, which was also built on false accusation of white-on-black rape.

And let’s not forget how Sharpton helped perpetuate lies in the Jena Six rallies here in Louisiana in a case that really wasn’t about race until race-baiters like he turned it into one.

Similarly, I predict that race will be found in every issue on Harris-Perry’s new show. After all, that has been the modus operandi as her time spent as an MSNBC pundit on other shows where she believes that all issues supported by conservatives are done so for clandestine racist reasons.  Her show will undoubtedly further MSNBC’s march toward irrelevance: