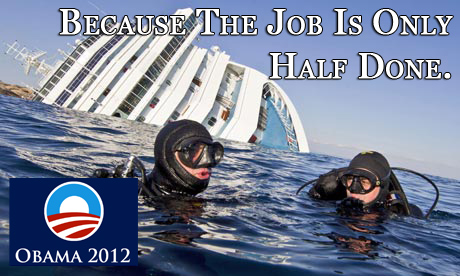 One assumption – or perhaps it might best be expressed as a predictive baseline – behind our analysis of the 2012 presidential campaign as eminently winnable for the GOP almost regardless of the party’s nominee is the lack of upside potential for the Obama administration.

Like Obama’s pastor of 20 years Jeremiah Wright might say, this president has too many chickens coming home to roost for a successful re-election campaign. Attack politics, accusations of racism and class warfare aside, America is still a country in which results and performance are paramount in positions of great reward and responsibility.

We expect our presidents to do a good job. Obama’s job performance in many respects is akin to that of the incompetent captain of the Costa Concordia, smashing our ship of state against a shoal.

One solid example of this which will likely be manifestly obvious by Election Day will be Egypt.

Yesterday, economic analyst David Goldman, posting under the alias Spengler at Asia Times, offered up a sobering analysis of the current situation there…

Investors bought less an a third of the 3.5 billion Egyptian pounds (US$580 million) worth of Treasury bills offered to the market on January 22, a red flag warning that Egypt’s foreign exchange position is close to the brink.

Yields on Egyptian government debt maturing in nine months jumped to nearly 16%, but the government could not place its local-currency debt to Egyptian investors, even at that exorbitant rate.

This is a new and ominous decline in the financial position of the most populous Arab country. I have been warning since last May that “Egypt is running out of food, and, more gradually, running  out of the money with which to buy it.” How fast this may occur is hard to specify, but the government’s inability to borrow on money markets suggests that the crunch is not far off. (See The hunger to come in Egypt Asia Times Online, May 10, 2011.)

He then notes the situation facing Egypt as a nation, bringing to mind the question whether it’s truly possible to bring such a country back from the current economic collapse it’s undergoing…

In short, Egypt is a broken society, and in assisting in removing the military dictatorship which held it together through admittedly unsavory means, Obama has shattered the vessel containing the pathology within.

Naive and stupid, the Obama administration hailed the coming of the Arab Spring in Egypt, demanded the resignation of Hosni Mubarak as the country’s president and congratulated the Egyptians on their newfound self-determination – at the same time a mob in Tahrir Square was brutally and sadistically raping and mutilating CBS News correspondent Lara Logan. Logan still hasn’t recovered from that trauma, and it’s unlikely she ever will.

Obama, of course, wasn’t alone in taking stupid positions on the revolution in Egypt. Several Republicans were just as misguided, including the microphone-fellating 2008 GOP nominee. Since John McCain has no power to make foreign policy, however, he can’t be blamed for this administration’s policy failure in pushing Mubarak out without an adequate backup plan.

The Muslim Brotherhood government set to take over in Egypt will inevitably lead to a failed state there. Real starvation is quite possible, as is outright civil war. It appears the proto-government in Cairo already has made an enemy of the country’s Bedouin population, with hostilities commencing at a Sinai resort yesterday.

And then there is the issue of the Christian minority. Already there is relatively widespread violence and persecution of that country’s Coptic Christian population, with calls in Egypt’s parliament to institute sharia restrictions on them and several high-profile church-burnings throughout the country. The Copts are attempting to decide whether the events of 2011 portend a repeat of the Turkish massacre of the Armenian Christians 100 years ago, and in such a case whether to make preparations for an evacuation.

Goldman paints a grim, though quite foreseeably accurate, picture of Egypt’s future…

Delusional as it was to expect Egyptians to support secular liberal parties that never existed and offered no solution to their desperation, it is all the more delusional to expect the Islamists to stabilize Egypt. The Islamist victory in the first round of voting last year almost certainly prompted the jump in capital flight in December, and the consolidation of Islamist power.

Egypt’s middle class will leave and tourism, down by a third over the past year, will virtually disappear in response to Salafist restrictions. The Barack Obama administration in Washington will try to appease the new Islamist government whenever it takes power, but will succeed no better than the Jimmy Carter administration did when the Ayatollah Ruhollah Khomeini took power in Iran in 1979.

The European Council set the tone for the international community’s response to the Egyptian crisis, with a statement on January 22 that it would avoid “formal dialogue” with Egypt until a democratic government is formed. There is no point talking to the generals, who are about to leave, let alone giving them money, for they would simply steal it.

Europe, however, will give serious thought to 449 million euros (US$560 million) in foreign aid during 2011-2013, a meaningless sum given Egypt’s requirements.

The Obama administration, despite the president’s enormous personal investment in the notion of Egyptian democracy, will do nothing until November, by which time it will be too late to do anything: the last thing the incumbent president wants during an election year is to defend an increase in foreign aid (the least popular line item in the US budget) to Egyptian Islamists (the least popular people as far as American voters are concerned).

By protesting the harassment of Egyptian human-rights groups in a call to the military leadership on January 20, Obama distanced himself from the mess he helped create by forcing the resignation of president Hosni Mubarak early last year.

The question is what are the ramifications of a failed Egypt? A country which descends into chaos is a black enough mark on Obama’s foreign-policy record. But considering what is likely to emerge there, chaos by November is a relatively good outcome.

If not chaos, it’s a safe bet the Muslim Brotherhood will create an Iranian puppet state. What fresh hell might that engender?

The most obvious possibility is an increased chance of war between Egypt and Israel. The leadership of the Muslim Brotherhood in Egypt is replete with individuals who frequently make belligerent statements about their neighbor to the east; a government led by these people can be expected to start hostilities with the Israelis as soon as they feel they could win.

But while an Egyptian-Israeli war brought on by Iranian prodding and assisted by Iran’s Hamas and Hizbollah proxies – and, perhaps, by the Islamist government in Turkey as well – would constitute a major headache, an even worse possibility involves the Suez Canal.

Remember that in 1956 the Nasser regime nearly caused a war with France,  Britain and Israel merely by nationalizing Suez and threatening to ally itself with the Soviet Union.

Through the Suez Canal some 7.5 percent of all world shipping moves. Receipts from its traffic total some $5.4 billion per year to the Egyptian government.

But an Egypt allied with Iran – and perhaps Russia and China as well – might well decide to put the squeeze on Suez traffic. In doing so, a great strain on European exports to Asia could well be placed, and oil exports from the Gulf States to Europe could be significantly reduced – with Russia as a prime beneficiary.

Goldman offers a frightful prognosis, and a prayer that in the future American policy might be better informed…

It is sad enough for Egyptians to stumble into a long night of hunger, repression and anarchy; it is doubly sad that Democrats and Republicans will do their best to ensure that Americans learn nothing from Egypt’s failure. Not often does a great and ancient country go to its ruin in the full light of day, observable in real time.

What passes for optimism – the notion that Americans can teach their political system to everyone else as if it were simply another technology – too often turns into adoration of our own cleverness. Millions of Egyptians will die before this is through. It would be a shame if this great sacrifice taught us nothing.

Humanitarian concerns aside, the lesson is not that America should conduct its policy for the betterment of Egyptians, most of whom can’t stand us. We should conduct our policy for the betterment of America’s interests. A chaotic, Islamist Egypt doesn’t serve those interests, while a militarized, dictatorial Egypt did – as queasy as that might have made some. Even Obama’s predecessor, for all his Wilsonian rhetoric about the universality of democracy and freedom, recognized that Mubarak’s continuance in power was vital to our interests.

That lynchpin was lost, and Egypt with it.

The only real question is how much of the coming disaster in that country will unfold before the election, and how much of an issue the unwise foreign policy approach pursued by our president will be in the general campaign.

The ship has clearly crashed on the rocks. Will the passengers care that it has sunk be election day?

Will any of this matter to the public?