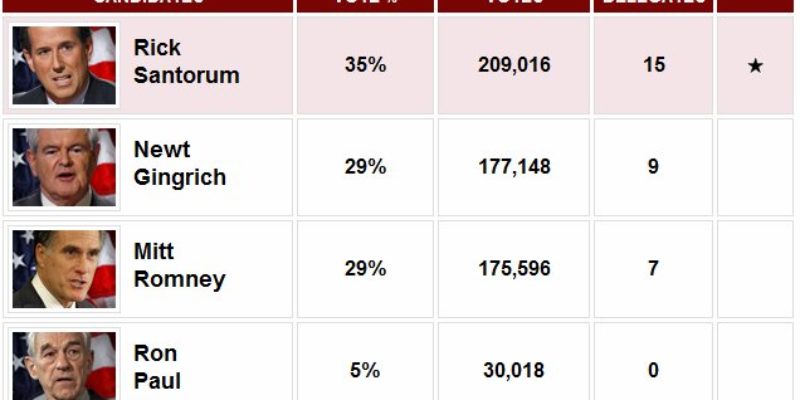 Just so happened that more people in the South – as defined, tonight, by the Mississippi and Alabama primaries – are interested in somebody other than a plastic New England dude who doesn’t bring much to the table from a rhetorical standpoint as the GOP candidate.

Santorum has presented himself as the Non-Romney Du Jour, and he edged out Gingrich for the 2/3rds of that vote in Mississippi and Alabama. 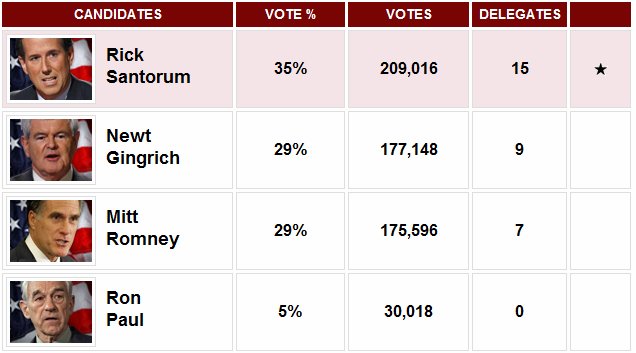 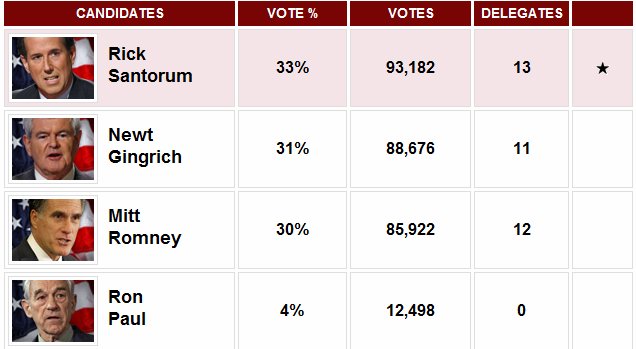 Lesson Number One from all this is for Rand Paul – if you want to make a real run at the presidency, rather than just build a mailing list like your dad did, don’t do the we’re-not-gonna-have-a-foreign-policy-if-I’m-your-president thing like your dad does. Because south of the Ohio River, that won’t fly. It won’t really fly anywhere, frankly, but there’s a strain of foreign policy thinking in the conservative movement which is friendly to a less Woodrow Wilson/George W. Bush-we’re-going-to-feed-these-people-democracy-even-if-we-have-to-do-it-via-anal-probe attitude than we’ve seen in recent vintage.

Paul’s problem is that he takes a position which is highly defensible, like for example that wherever we can bring American troops home while still serving our interests we should do that, and then tries to convert a bit of support for it into a run for the fringe. You can say we should have a less-“imperialistic” (a description I reject, but if you’ll indulge me you’ll understand where I’m going) foreign policy, but that doesn’t mean we have to rationalize an Iranian nuke on the basis that it’s all our fault they want one.

But beyond that, it’s striking that Santorum edges out Gingrich in two states Gingrich should have won comfortably. That suggests Gingrich is finished, though he refuses to give up the ghost, but it also suggests that Romney still just can’t close the deal.

Gingrich has gone around saying Romney is the weakest GOP frontrunner since  Leonard Wood in 1920. We have no idea who that is; what we do know is that regardless of  lefty historians’ opinion trashing Warren Harding, the ultimate 1920 GOP nominee, Harding’s administration saw the kickoff of the Roaring Twenties and it set the unfollowed standard of how you get out of a government-induced economic malaise. Harding vut taxes and cut federal spending in amounts which would send modern-day Washington into apoplectic shock, and the economic results weren’t just positive but immediately and shockingly so.

But Gingrich is more or less done, unless he can win Louisiana and Texas – and frankly, at this point both here and there look like Santorum Country if Romney can’t find a way to stop looking like a moron when ordering “cheesy grits” or having Jeff Foxworthy attempt to school him on the ways of non-country club America.

Can Santorum hold up to Romney? No. Even with his two big wins tonight he  really didn’t gain delegates against Mitt. For this being his big night he ended up only picking up a tiny few delegates.

But the voters clearly aren’t interested in hearing that Romney is The Guy. They want this to keep going, regardless of how many hifalutin’ pundits scream about how awful it is.

And what this means is that Louisiana, which hasn’t mattered in the primaries almost ever, will actually matter a good deal. Get ready for some major money being spent here in the next 10 days.

Interested in more national news? We've got you covered! See More National News
Previous Article Romney’s Campaign Likes To Talk About How Inevitable He Is As The Nominee, But…
Next Article Decision 2012 (March 14 “Super Southern Tuesday” edition, Part 1 of 2)