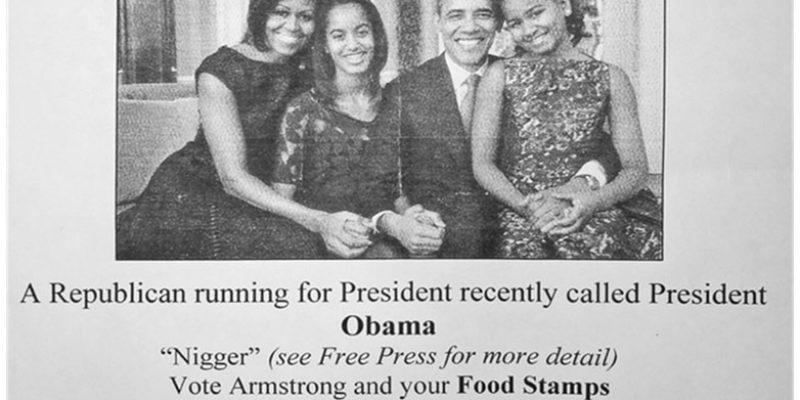 Flip through some history books to learn about racial politics of the 19th Century Democratic Party and you might run across a political ad or two like this: 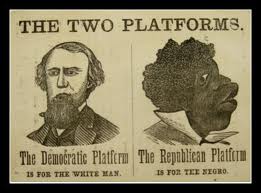 Yeah, it was kind of disgusting the way that the Democratic Party of old would try to pit white against black to create fear and racial animosity in order to score votes.

Oh, wait, they are still doing it, only in reverse.

Check out these flyers being distributed in black neighborhoods to get voters to polls to re-elect Monroe Mayor Jamie Mayo, the black incumbent Democrat who is running against white Republican Ray Armstrong in Saturday’s  election. You might want to click on these to get a better view: 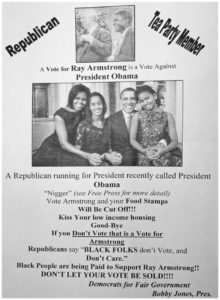 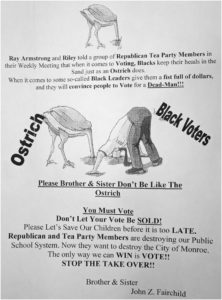 In hopes that blacks will go to the polls to keep a fellow black in office, Democrats are denouncing a vote for Armstrong as a “vote against President Obama.” And they shouldn’t  want to vote against Obama since he is having to deal with white presidential candidates running around calling him a “nigger.” How did I miss that one in the Main-Stream-Media? Somebody get MSNBC on the phone.

They’ve gotta keep the white guy out of the mayor’s office or black folks’ food stamps will be cut off and they can kiss their low income housing good-bye.

Apparently, a whole lot of power comes with being mayor of Monroe. Who would have known that Armstrong would be able to take away federal assistance programs after being whisked into office by a cabal of racist white tea partiers and Uncle Toms, whose votes he is busy buying?

This can only happen, of course, if both Mayo and Obama lose their re-election bids. With Armstrong and Romney in office come November, it will be a free-for-all in taking government goodies away from blacks. Whites receiving food stamps and public housing assistance need not worry—Republicans aren’t coming for you.

The racists distributing these fliers accuse their Republican opponents of saying “when it comes to so-called black leaders, give them a fist-full of dollars and they will convince people to vote for a dead-man.”

The great irony here is that if that’s true, aren’t these fliers helping make those racist Republicans’ point?

The fliers warn low-income blacks that they are in danger of losing their government handouts if they vote for the white guy—right before telling them “don’t let your vote be sold.”

Expect more of this kind of stuff from Democrats on a larger—yet not as idiotically blatant level—for the national elections in November.

The race agitators handing out the fliers also implore black voters to not be like an ostrich with its head in the sand. This is a sentiment I agree with.

My guess is that most blacks who see these fliers will recognize them for exactly what they are—disgusting attempts to use race to divide and scare people in order to win an election.

Those who don’t see it at such and will vote for Mayo because they believe nonsense like this are worse than ostriches will their heads in sand. Sadly, there’s little hope for them: 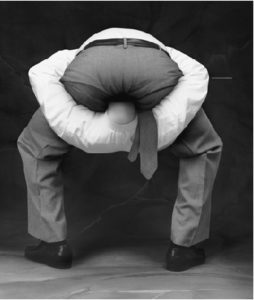 Interested in more news from Louisiana? We've got you covered! See More Louisiana News
Previous Article Did They Ride The Bus To That Street-Corner?
Next Article Jindal Signs The Education Reform Package