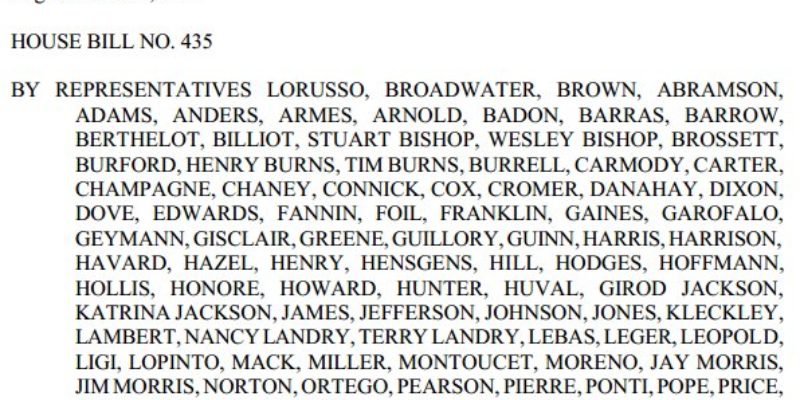 …then that party’s future isn’t much brighter than its recent past.

Ortego, who beat Democrat-turned-Republican Don Menard in an election for State Representative in District 39 last fall, has been put forth as a rising star in the Louisiana legislature. He’s a 27-year old architect specializing in “green” projects, and the recipient of effusive praise from the state’s Democrat establishment since his victory.

But he’s had some slow going after emerging as one of the Democrats’ fiercest opponents of Gov. Bobby Jindal’s education reform package, and coming off as rather obnoxious in doing so. Ortego’s manner greatly displeased many on the opposite side of the aisle, which earned him a bit more than the usual rough treatment afforded to rookie legislators on the House floor yesterday when he tried, unsuccessfully, to present a bill that would have provided for state regulation of bicycle traffic on sidewalks. That rather goofy piece of legislation (the regulation of sidewalks is more properly the province of local governments, no?) earned him this…

If there’s a rather derisive tone being afford Ortego in the clip, there is an explanation – beyond just Ortego’s vigorous defense of the educational status quo (which he’s pursuing by offering a bill to put wellness centers in public schools – which he says constitutes real education reform, rather than school choice and changes to teacher tenure), the freshman Democrat has come off as a clown several times.

Take, for example, this exchange from April 4. You didn’t hear about this, which otherwise might have generated some heat, because while it was going on in the House the Senate was debating Jindal’s education package on the floor. Nobody was paying attention to the House, and so Rep. Nick Lorusso (R-New Orleans) was flying under the media radar with HB 435, a bill to offer in-state college tuition to military veterans wishing to attend Louisiana public colleges whether they would normally qualify for residency for tuition purposes or not, and Ortego rose to question Lorusso on the public policy implications of the bill…

So if Ortego is the future of the state’s Democrat Party, we can expect suspicion of military veterans as nutcases and homeless bums, while it’s important for the government to dictate in minute detail every aspect of life from riding bikes on sidewalks to where to send your kids to school.

In other words, Louisiana Democrats apparently want to be just like national Democrats when they grow up. Or when Ortego grows up.

What’s likely is that the state’s voters will continue to tell Ortego – and his party – to shut up when it comes to statewide elections.

UPDATE: Now Ortego is saying we’re “smearing” him. From an e-mail we were forwarded by a reader who contacted him about what’s on that video about the veterans…

That video clip is out of context.

Here are the facts:

I am now and will remain a champion of Louisiana veterans. I honor the sacrifices the men and women in our armed forces make for our country and our state.

We don’t do enough to help our veterans in their return to civilian life. I’m in Baton Rouge to get our veterans the services they have earned. Even in this edited video you can hear the bill’s author thank me for co-authoring his bill.

Unfortunately, I was the target of a partisan smear. While I’m working to get more services for veterans others are trying to score partisan points with a doctored video. I won’t let them deter me from standing up for veterans.

Ortego must think the reader in question is stupid, or incapable of looking up HB 435 on the legislature’s website, by making a show of the fact he co-sponsored the bill.

Here’s the top of the first page of the bill: 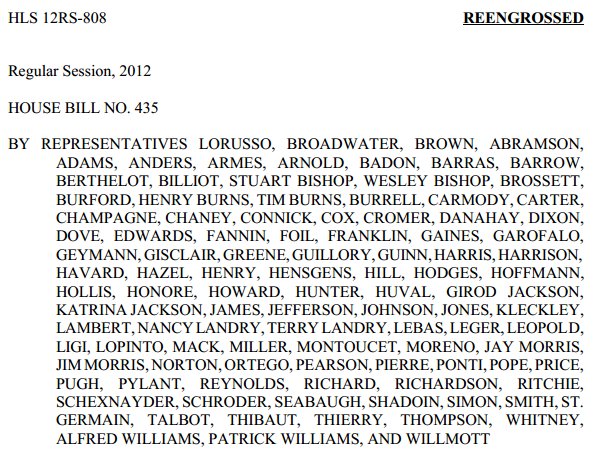 Sure looks like a lot of co-sponsors, doesn’t it? If you’ll count them, you’ll get to 105.

How many members does the Louisiana House of Representatives have? Wait for it…105. He’s not exactly special in his co-sponsorship of the bill, and he most certainly didn’t write it, nor did he offer an amendment to it to include any guarantee of support for military veterans. In fact, Ortego didn’t author any bills having to do with military veterans of any kind this year, so if he wants to say taking care of our vets is why he’s in Baton Rouge he can’t exactly offer much in the way of proof thereof.

And yeah, he voted for it. So did 103 other House members. None voted against it (somebody was absent for the vote). Again, not special. Nobody else made an ass of themselves during the floor debate for the bill.

As for his accusation that the video was “doctored,” he’s an out-and-out liar for making it. Watch the whole video session of the House floor from April 4 here. There’s no “doctoring” of the video at all; we cut it to include Ortego’s questions, period. Ortego must think, again, that the recipient of his denials isn’t capable of fact-checking his statements.

And furthermore, if he’s a “champion” of our veterans, he sure has a funny way of showing it. After all, as we said above we didn’t even know about his calumny of veterans as homeless and crazy when he said it; we were busy with the Senate floor debate of the Jindal education reform package that day. We found out about the episode Monday night – at a function where several of his House colleagues were present and more than one made a point to make us aware of it. Partisanship had nothing to do with it; three weeks after the fact they were still steamed at the fact he was painting veterans as undesirables.

In short, Ortego doesn’t have a valid excuse for his behavior, and his weak denials only dig a deeper hole now that his video is beginning to go viral as it circulates among veterans’ groups. What he ought to do is stop digging, cease attempting to blame others for his own bad behavior, apologize publicly and try not to make such a fool of himself in the future.

If he does that, we’ll lay off him until the next dumb move he makes. If not, well…we’ll just have a brand new favorite whipping boy in the Legislature, won’t we?

Interested in more news from Louisiana? We've got you covered! See More Louisiana News
Previous Article 5 Things You Might Not Know About Louisiana History
Next Article Jindal’s Retirement Package Getting A Facelift After Input From Leges