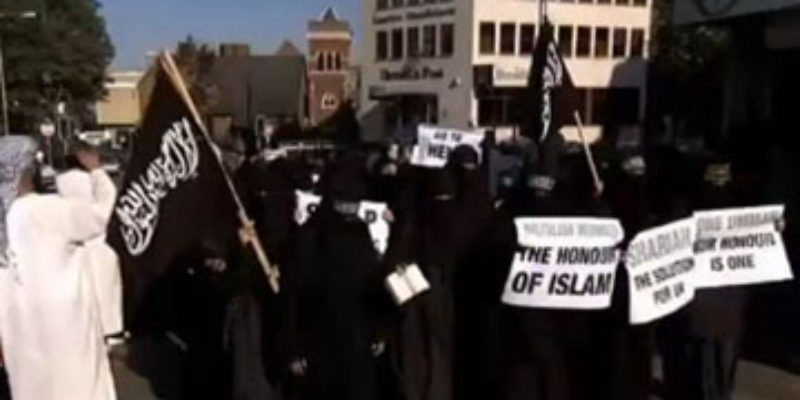 Imagine going back to your hometown and not only has the place completely gone to hell, but the people running rampant have the gall to get in your face and tell you you’re going to hell.

The Islamists are taking over big chunks of Europe, and it’s worse in the UK than a lot of other places. They’re a hostile, invasive presence which is breaking down European society.

And the response? You can see it on the video.

The protagonist here is Stacey Dooley, who’s a young reporter for the BBC, and the show this is taken from was called My Hometown Fanatics. It takes a poke at the English Defence League as well, which is the far-right nationalist group which is pushing back against the people on this video.

What she needed to do is ask the woman who accused her of looking naked whether she’d had her clitoris cut off or how many times her husband beat her in the last week in the name of sharia. Naturally, that would be a dangerous thing to do, because the animals in that crowd would likely resort to violence almost immediately and put her in the hospital. The fact is, she showed more guts than anybody in Luton just for doing what she did. Other than the soccer hooligans who beat up Muslims on the street, that is – which of course isn’t the answer either.

And that’s the real problem. Because the Muslims are the most violent, ruthless and committed element not just of British society but everywhere in Europe. The mainstream Euros believe themselves to be above all that – the nice lady in the video even says she’s above judging people who come from a 7th-century culture as they demonstrate against police “oppression” of terrorists. It’s nice of her to say she doesn’t judge people, but she’s being judged by one of the 7th-century types as she says it.

And that’s why without a complete sea change in European thinking the whole continent is lost. Notice in the video that the imam explains to her that any other legal system but sharia is null and void for Muslims. And that’s a pretty prevalent mentality among the barbarians who populate the European Muslim ghettoes, so much so that the cops there have largely given up trying to impose their will on those communities.

Eventually that sea change will come. But the problem is that the only people serious about this problem now are the soccer hooligans in groups like the English Defence League; their memberships will grow as this problem grows, but you don’t want the English Defence League in a position to run anything. That’s like putting Nazis in charge of Germany.

We have enclaves like this in the United States – Dearborn, Michigan is the one everybody talks about – but not many. Most American Muslims aren’t interested in living under sharia; they came here to get away from that crap. But of course it follows them, because the money which establishes the mosques and pays the imams comes from places where they want to install sharia. And nobody ever seems to even call it out, much less put a stop to it.

It’s like a darkness spreading across the world. And particularly in Europe nobody seems to have the will or guts to do anything about it.