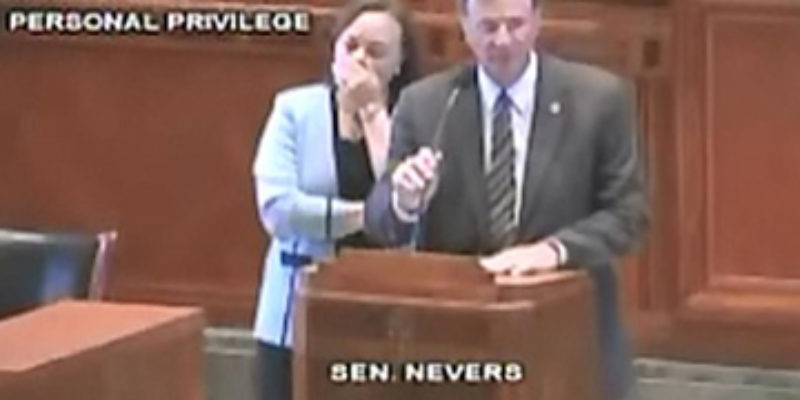 Earlier this morning in our post about today being the day Gov. Jindal’s education reform package would get a vote in the upper chamber of the Louisiana Legislature, we noted that yesterday Sens. Ben Nevers (D-Bogalusa) and Karen Carter Peterson (D-New Orleans) took to the Senate floor on a matter of personal privilege to address the fact that we submitted a public records request for their correspondence with the four highest officials of the state’s two teachers’ unions.

Many straw men suffered a vicious beating in the 11 minute presentation which ensued.

Most of this is self-evident as idiocy, but it does deserve a response.

First of all, we have zero interest in correspondence between Ben Nevers and his constituents, least of all those who can’t pay their rent or have relatives in prison or whatever. For him to howl about such irrelevancies is beneath the dignity of the state senate and indicative to us that we chose the right subject of our request.

Steve Monaghan, Mary Patricia Wray, Joyce Haynes and Michael Walker Jones, the four union leaders we asked to see correspondence to and from out of Nevers’ e-mail accounts and letterhead, do not reside in Bogalusa. They are not his constituents. Perhaps they represent teachers who are, but we did not ask for that correspondence.

We asked for Nevers’ correspondence with the union bosses. And we asked for it because we want to know the extent to which he’s being influenced by them. We asked that because the history of education reform and school choice in this country is a history of the teachers’ unions doing everything they could to kill that reform through Democrat politicians they control, and now that this battle has come to Louisiana we’d like to document that process here.

And as to Nevers’ concern about how this will cost the state some hundreds of thousands if not millions of dollars, if he’s so concerned about the effects on the public fisc surrounding what is the constitutional right of a Louisiana citizen to examine government records, which by the way Peterson admitted was absolutely the case, then he can save the state a great deal of money by going into his e-mail program, sorting his inbox and “sent items” for the four union officials in question and simply forwarding what’s there to us himself.

Cost to state: nothing.

After all, Nevers said on the Senate floor that he had nothing to hide. Which is suspicious, considering the last time somebody asked for a public records disclosure of things he was doing while the rest of us weren’t looking he wasn’t so forthcoming.  But OK, if he’s serious about transparency this time he’s got an opportunity to prove it.

Is it just us finding this amusing? We’re getting a panicky vibe here, and it sure indicates more than just irritation and inconvenience.