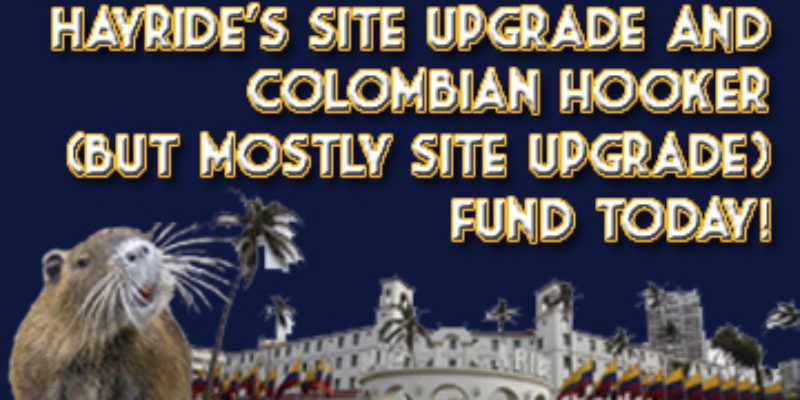 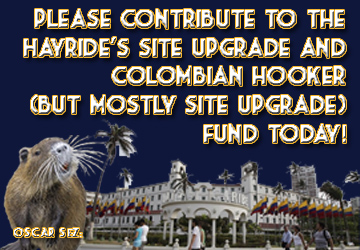 Most websites which don’t charge for subscriptions will from time to time hit their readers up for spare change, and we’re not really different.

Which means for the next couple of weeks we’re going to be bugging you guys to give us a little love. And by love, what I really mean is cash money. Dead presidents. Samoleans. Wampum. We’re setting up a site upgrade fund, and we were wondering if y’all wouldn’t mind filling it for us.

What’s going on that we’re looking for a few extra bucks for is site upgrades. Some of the stuff we’re doing you’ve probably already seen, like that cool new rotating thing we did. And we did a much better job with making the archives more easily accessible. Plus we set up that “post an article” feature, which allows regular Joes who might have some talent and want to post something on the site to do it without knowing a lot about WordPress.

And a few other things.

But we’ve got some more stuff we’re working on – a lot of which, frankly, you won’t really notice. It’s behind-the-scenes type work that will make us more friendly for search engines and so forth. The more we get into this web publishing business the more we realize that other than writing posts which either make people happy or piss them off we really still have a whole lot to learn before MacAoidh isn’t constantly freaked out about how the site’s doing.

Anyway, we think we can make progress on some of the internal sausage-making type stuff we need to get done, but not without goosing the bank account a bit.

So that’s where you guys come in. We’d like to try to raise about ten grand in the next couple of weeks if we could; that would cover this round of site upgrades. And maybe even a Colombian hooker or two.

Did I say Colombian hookers? Well, see, those aren’t for us. They’re for those hard-workin’ broke dudes at the Secret Service. We want to make sure that the next time Obama goes to Cartagena his security detail doesn’t cause an international incident because they didn’t bring enough dinero for the extracurriculars.

But of course, the site upgrades have to come first. Because we’re not that patriotic.

But seriously, you guys all know how much we appreciate your readership of the site, and how important you are to its success. We want to make sure we keep making this place better and better so that when you come visit us the toilets flush and there’s beer in the fridge – so that’s why we’re always trying to keep the thing moving forward. And while our ad revenues are getting closer to paying the freight for us to do that without having to ask y’all for extra, we’re not there just yet. After all, we’re only a little more than two years old.

So if you can part with ten bucks – or ten grand, if you’ve got it layin’ around – we’d be really grateful. It’d go a long way toward keepin’ us going as we grow.

Please feel free to hit the image to donate, or just click here.

Or, if you’re not crazy about the PayPal thing, that’s OK – we take checks with a smile. Just make ’em out to:

Interested in more national news? We've got you covered! See More National News
Previous Article From The Space Station: What A Wonderful World…
Next Article Sometimes You Can Just Tell Who’s Good At Their Job…