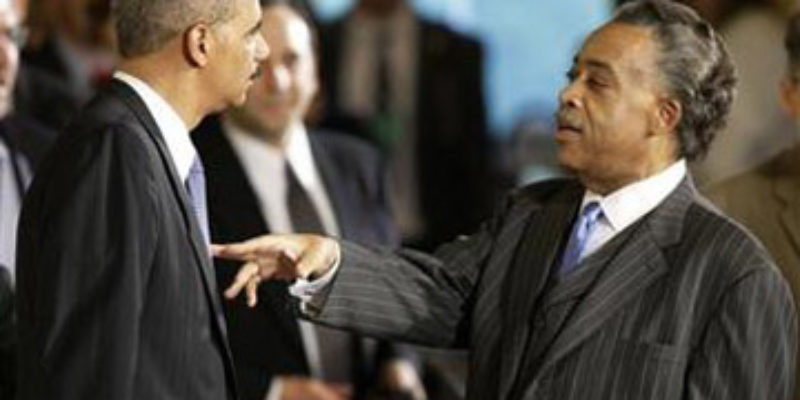 Our buddy Quin Hillyer at the American Spectator often hits home runs with things he writes.

When Quin gets his blood up about Eric Holder, “often” turns to “always.”

Yesterday’s nuclear blast after he found out about Holder’s face-sucking tryst with Al Sharpton was epic. So we’ll crib it in full (it’s short enough that you can’t excerpt it while still doing it justice)…

Even I, with my low opinion of Thug-in-General Eric Holder, can’t believe he would lavish praise on scofflaw, tax evader, and murderous inciter to violence Al Sharpton in the way Holder did here.

Amazingly, Holder ” thanked [MSNBC’s] Rev. Sharpton ‘for your partnership, your friendship, and your tireless efforts to speak out for the voiceless, to stand up for the powerless, and to shine a light on the problems we must solve, and the promises we must fulfill.’”

Maybe Holder holds all those views himself. Maybe he sees racial and religious payback against innocents as being among the “promises we must fulfill.”

Maybe Holder is a moral degenerate.

The opportunity to call a high public official a moral degenerate in a published piece is a rare thrill for a writer. Doing so out of conviction and principle, which Quin is doing here, is even more than just a thrill.

He’s to be congratulated, because he’s absolutely correct. For someone holding the position that Holder holds to cozy with a sleazeball criminal demagogue like Al Sharpton is beneath contempt. It’s worth asking exactly what it is our Attorney General expected to gain or prove by such an episode; had an Ed Meese or John Ashcroft broken bread with David Duke it would have been seen as a sign of the apocalypse. Al Sharpton is no less toxic.

But while Quin’s animus toward Holder isn’t misplaced in the least, we’d point out that it does no good to suggest his ouster – which Quin doesn’t do, but the point should be made nonetheless. Holder is a crook and a troglodyte (and a moral degenerate) of the first magnitude, but so are virtually all of the other high officials in the Obama administration – the bald-faced liar Ken Salazar, the persecutor of religious institutions Kathleen Sebelius, the denier of Congressional advice and consent on military operations Leon Panetta, the tax cheat and Nero of the public fisc Tim Geithner, and so on.

At this point if Holder or any of the rest of Obama’s gang of misfit nobles were to abandon the scene it would only help his presidential hopes. And as bad as this cabinet is, it’s but a symptom of the real disease.

Obama has to go.

Everything is secondary to that.

If it means getting behind Mitt Romney, who we’re as ambivalent about as any Republican nominee we’ve been since – well, since the last Republican nominee – then so be it. A mediocre GOP president with centrist leanings isn’t exactly what we need now, but it’s a hell of a lot better than four more years of the damage this president is doing to America’s public fisc, social fabric, business climate and national prestige and security – which will only accelerate if he’s unbridled by re-election.

If it means gasoline goes to $6 a gallon, then so be it. Temporary economic pain which wipes out this president and Harry Reid as the Senate majority leader, clearing the way for true reform in Washington that leads to a return of the economic freedom and competitiveness which made us the world’s marketplace to begin with is merely the price we should all pay.

And if it means Quin – and the rest of us – has to put up with more outrages like Eric Holder swapping spit with Al Sharpton, then so be it. Let’s just play up every one of these affronts in order that the nice people who voted the country down the river in 2008 might see the error of their ways.

So while we agree that Holder is everything Quin says he is, we’d caution that six more months of Holder could well be the price of avoiding four more years of Obama.

And that’s a small price to pay.