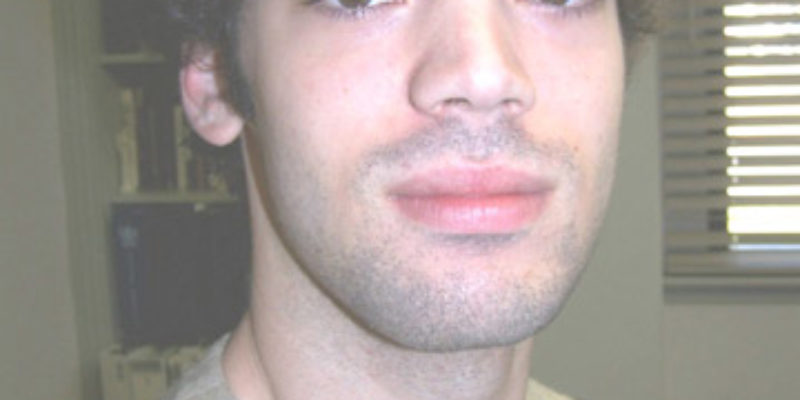 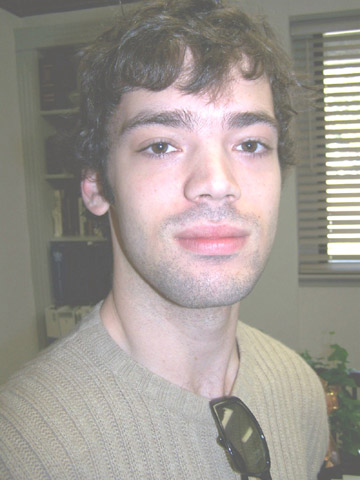 We don’t spend a great deal of time looking at the state’s lefty blogs. Most of them are poorly-written, and those which aren’t contain moonbattery of the sort which doesn’t quite rate our ridicule. Every once in a blue moon you’ll see something on one of those sites worth reading and on the occasion of a solar eclipse or the Cubs making the World Series one of those guys will make a respectable point.

It so happens, though, that while doing a Google search this morning for an old piece we wrote, I ran across this. It’s a post by a guy named Lamar White, who goes by CenLamar – the title of a relatively infrequent blog which is supposed to originate out of Alexandria but apparently doesn’t; we understand White is a law student in Dallas now.

In any event, at the bottom of a long post about the recent history of the state’s Democrat Party and how the fresh box of nuts in charge of it will bring about a renaissance to its fortunes was the following…

PS: Thanks to the vapid idiot who runs the website The Hayride for inspiring this post. You and your website contribute nothing of substance to our political discourse, nothing. If anything, considering your posts about the President not having a “drop of slave blood,” you are corrosive, and often, your website is nothing more than thinly-veiled bigotry. 1951 may be comfortable, but most of us prefer to live in 2012.

Gosh, that really hurts my feelings. I don’t know what I’ll do now that I’ve discovered I contribute nothing of substance to Louisiana’s political discourse.

Strange that the Washington Post thinks we’re one of the most influential state political blogs in the country, one of three in Louisiana which made the list. Turns out that Lamar’s little blog didn’t pull off that trick, which is too bad. Because he’s got so much to tell us about important issues like Bobby Jindal’s homophobia or how stupid Louisiana College is for not swallowing their Obamacare medicine, and all.

But I did get a little confused about being called a bigot, and the particular accusation about how we said Barack Obama doesn’t have a drop of slave blood. Because that doesn’t sound like anything I’d write. It also doesn’t sound like anything any of our regular contributors write, either. I’m pretty rough on the black community because it’s my position that the black community has allowed itself to fall victim to a destructive and inferior culture, and until it rejects that culture none of the social problems which plague that community will go away.

But that’s about culture, not about race, and there’s a difference. You can choose your culture. And in any event, blood has nothing to do with it.

So I decided to do a little search about that “drop of slave blood” quote. And guess what? The reason I didn’t recognize it is that nobody at the Hayride ever wrote it.

Shocking that this may be, poor Lamar was confusing this site with Louisiana Conservative, a site run by Jeff Blanco at which a post carrying the “slave blood” stuff appeared back in November of 2008. We didn’t start publishing The Hayride until December of 2009.

If we don’t, we’ll just sue him for defamation. We won’t get any money out of him, because he doesn’t have any. Or at least we don’t think he does – if we’re wrong that’ll just be a nice bonus. But we’ll damn sure get it on the record that he’s defamed us and he’s lied about what we write here. And that’ll be satisfaction enough.

So what’s it going to be, Lamar? Are you going to man up and admit you don’t know what you’re talking about, or do we have to beat that out of you in court?

UPDATE: Well, what do you guys think of this? 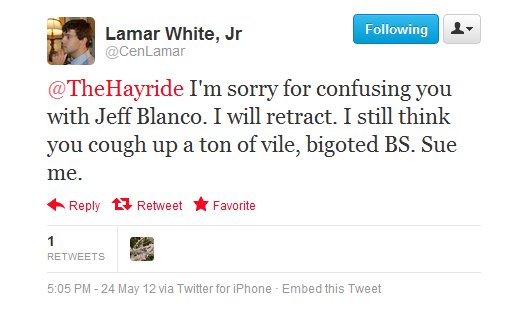 Can’t say it’s impressive, but it’s hardly different from what we expected.

We could certainly sue him. Here’s what our lawyer, who happens to teach 1st Amendment law at LSU, had to say about this…

At the end of his post, “A New Day for the Louisiana Democratic Party,” Lamar White, Jr., posted the following: “PS: Thanks to the vapid idiot who runs the website The Hayride for inspiring this post. You and your website contribute nothing of substance to our political discourse, nothing. If anything, considering your posts about the President not having a “drop of slave blood,” you are corrosive, and often, your website is nothing more than thinly-veiled bigotry. 1951 may be comfortable, but most of us prefer to live in 2012.”

Interestingly, while these statements may all seem defamatory on their face, some of it may be protected opinion. In Louisiana, four elements are necessary to establish a claim for defamation: 1.) a false statement of and concerning the plaintiff (you), 2.) published to a third-party, 3.) fault (negligence for private figures, actual malice for public figures) and 4.) injury. This statements are clearly made of and concerning you, “who runs the website The Hayride” and published, to White’s audience, causing you injury. Whether you are a public or private figure is more complicated, although I believe we could succeed no matter your classification, but there is definitely a cause of action to be had for the following statement:

“Considering your posts about the President not having a “drop of slave blood,” you are corrosive…” This is a statement that is provably false, if you did not post such an assertion. Further, the language Mr. White used in building up to this statement makes it appear to be made with malice.

In this post he makes several other accusations against you, including calling you a “vapid idiot,” and saying your Web site “contribute[s] nothing of substance to our political discourse,” and that “your website is nothing more than thinly-veiled bigotry.” Under the First Amendment to the U.S. Constitution, there is ”no such thing as a false idea.” Gertz v. Robert Welch. Therefore, statements must be proved false before they can be actionable (note the above element No. 1 in the libel test, “a false statement”). The U.S. Supreme Court has stated that while all opinions are not privileged from libel, the libel plaintiff must show that ”the challenged statement both (1) implies an assertion of fact and (2) is “sufficiently factual to be susceptible of being proved true or false.” Some of these opinions, like you being a bigot, for example, could be proved false, but others, like your Web site not contributing anything of substance, are probably just Mr. White’s opinion.

We’ll wait to see his retraction. It had better be an improvement on his tweet.

UPDATE #2: Apparently, he’s a night owl. We went on Twitter and told him his “I’m sorry” was insufficient, and what we got was this…

By the way, this was his “correction”…

Update: Correction: The Hayride did not publish the article titled “Not a Drop of Slave Blood;” LouisianaConservative.com did. I apologize to my readers for the mistake.

What’s most offensive here, and of course typical, is the intolerance and faux-elitism of airhead lefties like this one – in that if you offer a different philosophical opinion or fail to accept their feeble construct of reality, you’re a “bigot.” That, of course, is little Lamar’s term for what he really wants to say, which is “racist.” Enough actual reality has penetrated his skull for him to know he’s going to look laughable throwing that charge around recklessly, and probably it’ll make it even more likely he gets sued if he uses that word.

The problem is, there is no difference in this context whether he says we do racism here, or bigotry. What he’s trying to say is that we’re not allowed to depart from his ideological position without getting tarred for it. And he’s hiding behind saying “it’s my opinion.”

Well, OK. In my opinion, just looking at his picture, this guy could be a child molester.

See how this works? I didn’t REALLY call him a child molester, I said he looks like he could be one. And anyway it’s my opinion – I’m entitled to it. Besides, aren’t most felons Democrats? THAT I can back up with facts. He’s a Democrat, and he certainly looks sketchy enough, so you can draw your own conclusions.

What’s laughable here is the laziness. His initial justification for calling us bigots was a four-year-old article at another website, before we were even publishing here. We called him out for bungling the reference and thus having no facts to support his accusation. He then makes a “correction” on his website intended to inflame the situation, and then suggests that when we addressed this topic in our initial post by saying culture isn’t race and there’s a cultural problem in the black community – which is a statement such wild-eyed skinheads as Bill Cosby have consistently trumpeted as well, and oh-by-the-way some of the same cultural problems which have ravaged black America are doing the exact same thing to other ethnic communities in this country as well, which is why we’re saying it’s about culture rather than race – he latches onto that statement and calls it bigotry.

As if that will wash.

We’re not going to spend too much more time on this clown. We have lawyers for that. It’s clear we won’t get satisfaction otherwise, but that’s what we expected from the beginning.