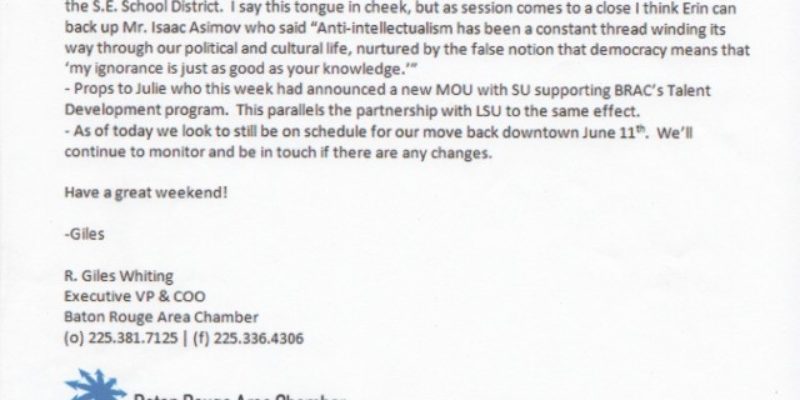 Last week a move by citizen activists in Southeast Baton Rouge to create a breakaway school district independent of the failed East Baton Rouge Parish school system along the lines of those created by the people of Zachary and Central fell just four votes short of passage in the House of Representatives (nine votes short when the bill was brought for a second vote on the floor).

Among the groups fighting against the bill was the Baton Rouge Area Chamber.

Had the ISD bill passed the House (there were indications Gov. Bobby Jindal would have signed it), it would have gone to the voters in November. That would have been plenty of time for BRAC to complete Richardson’s study and use it as the basis of a position on the ISD, whether pro or con. Instead, BRAC was opposed to it from the start.

Nevertheless, when the bill failed in the House and the Southeast Baton Rouge ISD died, at least for this year, it was reasonable to expect the BRAC folks to celebrate a bit over having won the day.

But an e-mail among BRAC’s staffers marking the victory got out of the loop of its intended recipients, and all hell has broken loose. 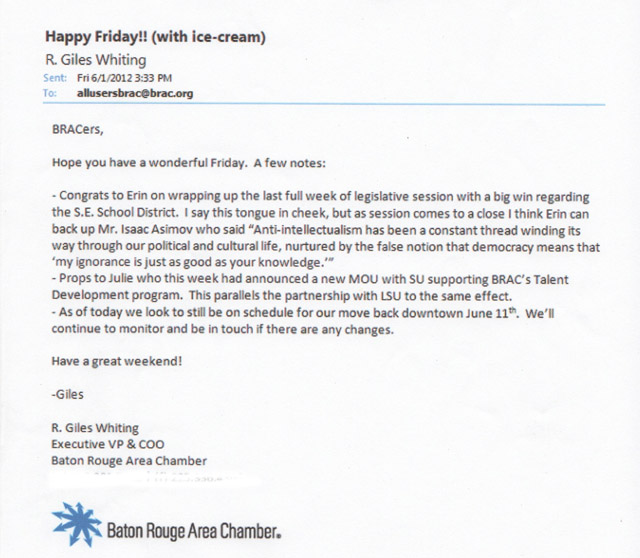 Asimov, of course, was a prolific science fiction writer, the Vice President of Mensa International and a lifelong left-winger who spent most of his last two decades on the planet before dying in 1992 echoing the warnings of moonbats like Paul Ehrlich about population control. Undoubtedly he was a highly intelligent individual, but perhaps a better science fiction novelist than a provider of social commentary. And he was one of the goofiest-looking people of all time, which might or might not call his disparagement of Mensa non-members into disrepute.

The quoting of Asimov to disparage the promoters of the Southeast Baton Rouge ISD as “anti-intellectuals” is interesting, though, and not because it might have offended them. Giles Whiting, the sender of the e-mail, didn’t know that he was going to be launching a viral communication when he sent it (though perhaps he should have), and he probably didn’t realize all of the implications of using Asimov as a club to beat the opposition.

Still, the e-mail is now being circulated widely today. And it’s one more controversy surrounding BRAC as an alternative chamber in Baton Rouge ramps up operations.

UPDATE: The proponents of the breakaway school district fire back. This from Lionel Rainey, who serves as the spokesman for Local Schools for Local Children…

It’s unsettling to see a body charged with economic development celebrating a political defeat of a citizen-led initiative to better the education of their children. This, combined with the jubilant cheers from the status quo after our defeat, will only continue to fuel the fire of our base. Since we are quoting today, here’s one we particularly like: “Any people anywhere, being inclined and having the power, have the right to rise up, and shake off the existing government, and form a new one that suits them better. This is a most valuable – a most sacred right – a right, which we hope and believe, is to liberate the world.”

Next years session cannot get here quickly enough. I hope they don’t think we’re giving up.

So now we’ve got dueling quotes. One side has Isaac Asimov and his string tie, the other one has Abe Lincoln.

Interested in more news from Louisiana? We've got you covered! See More Louisiana News
Previous Article My American Spectator Piece On Louisiana’s Budget, And Latest Developments
Next Article Were It Not For The Budget, We’d Say This Was A Good Legislative Session