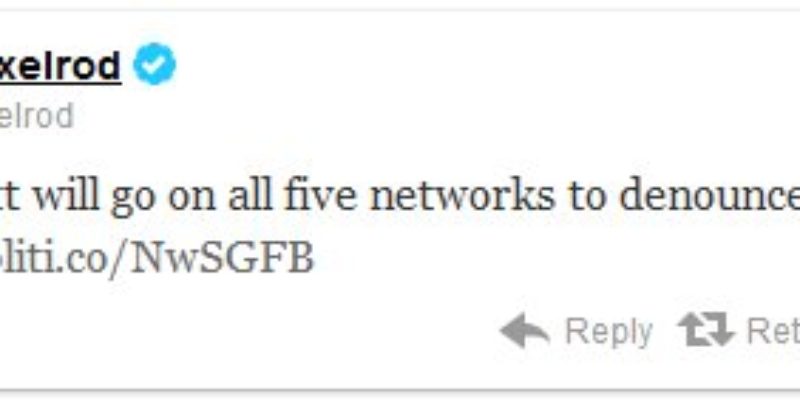 …on how to handle the latest in the back-and-forth.

Specifically, we have this:

The link in Axelrod’s tweet is to Rush Limbaugh’s verbal beatdown of President Obama for his “You Didn’t Build That” speech.

So in other words, the campaign which accused Romney of a felony last week – THE CAMPAIGN ITSELF – and refused to apologize when called out on the fact that its accusations about him were pure bovine excrement, now is demanding that Romney apologize for something Limbaugh – WHO IS NOT PART OF THE ROMNEY CAMPAIGN – has said about Obama.

And by the way, it’s not a felony to hate America. It’s “somewhat” disqualifying for a presidential candidate, of course, but it’s actually a softer allegation than calling Romney a felon who would therefore belong behind bars.

So Axelrod thinks he gets to make a dirtier allegation than Limbaugh did, using a high-level campaign staffer rather than a third party with no affiliation with the campaign to make it, suffer no consequences and then get Romney to either apologize or otherwise distance himself from Limbaugh’s statement.

And here’s how Romney should respond to it.

But since Limbaugh’s pot shot at Obama is in the news, Romney ought to say that maybe the Obama campaign ought to ask itself why Limbaugh said what he said. Maybe Limbaugh got the idea from Obama’s first book, where he pretty much says he thought America was nothing but a racist hellhole as he was growing up and going to expensive private schools. Or maybe Limbaugh got the idea from Obama being a 20-year member of a church where the preacher would say stuff like “God Damn America” and that 9-11 was our chickens comin’ home to roost. Or maybe he got it from Michelle Obama saying she’d never been proud of her country until it appeared we’d let her stay in the White House for four years. Or when Obama said America wasn’t exceptional. Or when he called us lazy. Or when he assaulted states in court for the sin of trying to do something about illegal immigration or vote fraud. Or when he said last week that what’s been his biggest problem so far was his inability to bullshit us into thinking he’s doing a good job.

Romney could say that he doesn’t particularly agree with what Limbaugh said about Obama hating the country. Except that he could certainly understand how Limbaugh could make the mistake of thinking that, seeing as though Obama has been giving out mixed signals about what he thinks of this country or the regular Americans who populate it.

So Romney could say that maybe this is Axelrod’s fault. Since Axelrod is Obama’s campaign guru, and all. Maybe it’s Axelrod’s failure to craft an inspiring message that would make it clear to people – even people like Limbaugh – that Obama doesn’t hate the country he governs. And Romney could also wonder out loud if maybe Obama doesn’t agree about that last part; maybe that’s what Obama was trying to say when he talked about how he’s had trouble telling the country a good story about his presidency.

Either way, Romney could say, Axelrod ought to get off Twitter and focus on doing his job before he gets himself – and maybe his boss as well – fired. And if he wants an apology for something Limbaugh said, then he should ask Limbaugh. “Because we’re sold out of fake contrition to Chicago scumbag pols over here.”