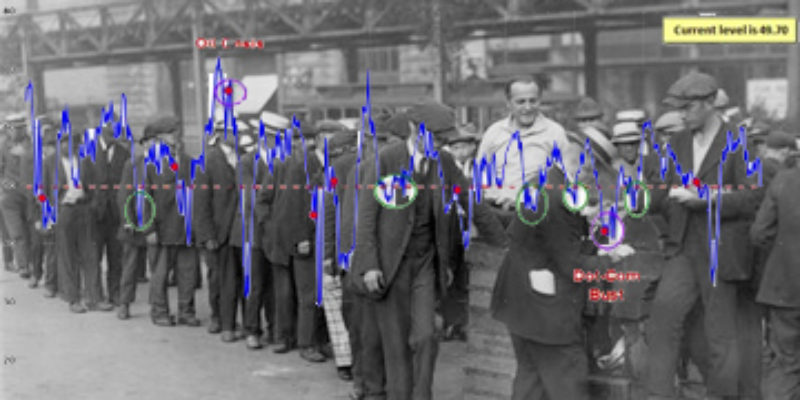 As in, we’ll be in a recession by the time you get back. 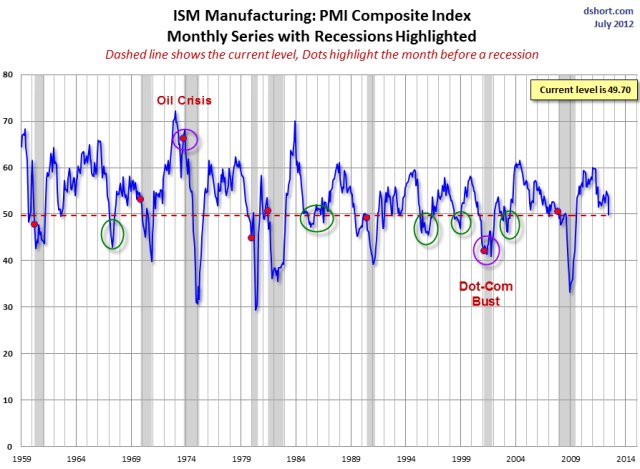 The graph comes from Doug Short. We found it at Doug Ross’ site. The green circles indicate dips in manufacturing which didn’t correspond to recessions, and the red dots indicate the month before a recession began.

You can stick a red dot at the end of that blue line now if you like, because we’re going down.

This is what happens when businesses have no idea what the economic, monetary and regulatory conditions they’ll be dealing with will be in six months. This is what you get from Obamacare looming on the horizon, with Taxmageddon awaiting in January, with Europe’s slow-motion collapse, with the promise of the shale gas revolution in jeopardy thanks to the EPA and the Department of Interior attempting/not attempting to ride herd on it, with our inability to build something so basic as a pipeline without it being a colossal political battle, with the federal government essentially bribing banks with free money from the Fed so as to induce them to finance the deficit rather than business inception and expansion, and on and on.

Sooner or later, you’re going to break the back of the productive economy. There’s only so much cost and uncertainty businesspeople can put up with before they say “forget it. I’m not hiring, I’m not expanding and I’m not even sure I want to do this anymore.”

Here’s a micro-example. From a local message board, behold the wonders of Obamacare…

I’m a 21 year old college student who works at McDonald’s. I usually bring home about 32 hours a week. Well thanks to Obamacare, everyone I work with will now start maxing out around 25 hours, because our owner doesn’t wanna have to pay or offer us insurance madated by Obama care for employees.

You can protest the evil employer cutting his employees back if you want, but of course what he’s probably going to be doing by capping his people at 25 hours a week is hiring a few extra employees to make sure he’s staffed for operations. So that’s an example of more (under)employment thanks to Obamacare.

Tell that to the college kid who just became even more broke thanks to the president. And tell it to the McDonald’s franchisee who now has to go out and find more employees because it doesn’t make sense to give the ones he’s got full-time hours.

This is going on all over the country, on virtually every front. It can’t continue. We’re going into a recession again, and we won’t have a real economic recovery until we shake off the cost and the uncertainty the government is placing on the productive sector. Particularly when that cost and uncertainty is built to create and sustain government dependency. Did you know there are now 8.7 MILLION PEOPLE drawing Social Security Disability checks in this country now?

Daniel Hannan, who isn’t American but has seen what this road leads to from his perch in nearly-defunct Great Britain, said it best…

You cannot carry on forever squeezing the productive bit of the economy in order to fund an unprecedented engorgement of the unproductive bit.

Obama is proving that. We’ll have to thank him for the lesson, after we dig him out of the White House.

Interested in more national news? We've got you covered! See More National News
Previous Article Nuts To You And Nuts To Your Taxes…
Next Article JINDAL: It’s The Declaration Of Independence, Not Dependence