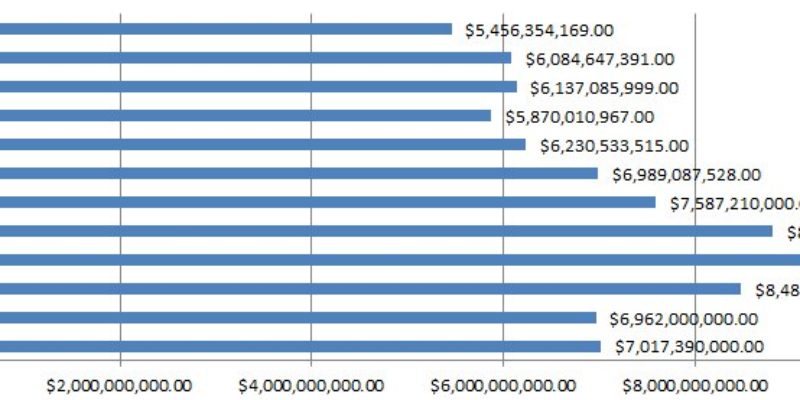 …because it would probably present him as something other than the small-government conservative he wants folks to see him as while he’s being vetted as a vice-presidential candidate. Perhaps unfairly, as we’ll analyze below. To be fair, eight of the 10 years in question don’t involve Jindal’s budgets. He took office in 2008, but the money the state spent that year had already been appropriated by Kathleen Blanco and her gang in the legislature.

What this graphic reflects, though, is a number of factors.

First, the Stelly Plan went into effect in 2003 and wasn’t repealed until 2009. Most of the revenue which drove that growth of state spending came as a result of Stelly revenue and the higher state income taxes it represented.

We’re assuming this is drawn from a data set from FY 2000 to FY 2009. Here’s a graphic we put together from numbers we found at the Louisiana Department of Revenue…

And it needs to be said that the other major driver of government spending growth in the state – which also has a whole lot to do with that rocket the per-capita income was on was Hurricane Katrina. Because the state’s per-capita income was $24,000 in 2005. In 2006, it was $31,000. There’s your 29 percent decrease in population in Orleans Parish virtually overnight, plus a flood of tens of billions of dollars in federal recovery money.

Of course, the trick is to have rising per-capita income and oil revenues WITHOUT concurrent growth in government spending (and no hurricanes either, while you’re at it). If you can do that you’ll have population growth and a truly booming economy. One reason Louisiana comes in 2nd in the country in per capita spending growth is that we were also near the very bottom in population growth. Same population, higher spending…you’re going to grow your government faster on a per capita basis than a place which grows its population by 20 percent over the same time period. And the state’s population growth, or lack thereof, isn’t just a Katrina thing; it was flat before Katrina and it’s actually growing faster now than it did between, say, 1990 and 2005 when we specialized in churning out expatriate coonasses and yats.

But reining in those expenditures was something Jindal didn’t do until after the boom went bust.

Even with the bust, though, Louisiana still has over $1.5 billion more a year – 29 percent – more state revenue than it did in FY 2000. But that’s down from a 67 percent increase in FY 2008, before Jindal took office. That’s why he’s cutting – belatedly, according to some.

In short, this is complicated stuff. The state had a boom in government revenues and spent every dime of that money. The boom is over, so it’s cutting. And Jindal, in the style anyone would expect of a politician regardless of stripe, is taking credit for being a budget-cutter.

He’ll have an opportunity to take even more credit for doing so now that the feds are slashing Louisiana’s Medicaid funding by almost $900 million, an 11 percent decrease overnight…

Louisiana’s health department is working on how to cut $859 million from the state’s Medicaid program for the poor and uninsured, stripping 11% of the funding for health services. The cuts to the budget for the new fiscal year that began Sunday came as a surprise to the Jindal administration and lawmakers, cropping up late last week when Congress slashed Medicaid funding to the state in the federal transportation bill that was approved Friday afternoon. On the chopping block are charity hospitals, hospice care and Medicaid providers. Gov. Bobby Jindal’s administration outlined expected cuts that will eliminate programs providing services to women with breast and cervical cancer, hospice care, and adult dentures to the poor and uninsured. In addition, funding to the LSU public hospitals and rural hospitals will be reduced, threatening some of the facilities with closure.

Still, recent history – and particularly the history between 2000 and 2010 – shows growth of government in Louisiana that totally outstrips any reasonable expectation, at a time when the demand for those government services wouldn’t appear to be all that high based on the per-capita income growth numbers and the population figures.